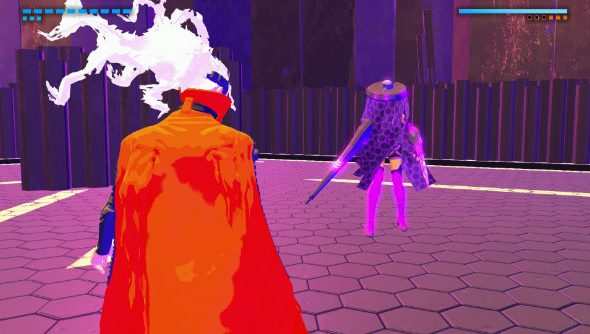 This looks great. Furi is a boss rush game with stylised visuals that tasks you with battering bosses in neon arenas, timing your dodge teleports to avoid magical attacks, laying into enemies with your katana, firing your guns and parrying blows.

Furi looks excellent, but will it make it into our list of PC’s best indie games?

It’s focused on one-on-one, duel-style encounters, and blends twin-stick shooting lighting fast swordplay. The bosses are all designed by Afro Samurai creator Takashi Okazaki, and each one will have a distinct fighting style, forcing you to adapt, and it’s all backed by pumping electro.

According to the official site, Furi was born when creator Emeric Thoa was asked what he would do if he could make his dream game. He came up with the concept of a sequence of boss fights against opponents similar to the player, rather than opting for demons or huge, tentacled beasts. He wanted each encounter to feel like a tense, exhausting duel. If this gameplay trailer is anything to go by, he succeeded.

“Furi is a game where you fight for a reason,” says the blurb. “It’s a game that teases you before the fight, while you walk toward your fate, the same way you would be pumped up and stressed before a boxing match. With Furi, we want to give the player an extreme satisfaction when s/he beats a boss. That means s/he’ll have to sweat a little for it.

“The game is heavily inspired by the Japanese way of making games. It’s not trying to be realistic in its style or animations. It’s fast-paced and requires a lot of timing, reflex, and judgment. When you press a button, the character reacts immediately.”

It’s coming to PC this year.