From the earliest Guitar Hero games, Harmonix’s output has often emphasised imitation. If you’ve played the likes of Rock Band, you’ll know the experience of stepping into the shoes of another performer and trying to match their crowd-pleasing efforts beat-for-beat.

While there have been modes or mechanics in the studio’s back catalogue that diverge somewhat from the linear task of hitting buttons or swinging limbs at prescribed moments, the main capacity for individual flair came via the gusto you put into your routine, exuding rock star energy as you strutted across a living room. Harmonix’s coming game Fuser, however, pivots toward letting the player control the music.

Arriving this autumn, Fuser is something like an accessible mixing simulator. It’s certainly not a music creation platform, and it doesn’t do for DJing what Dreams has done for game development. But it’s conceivably a game you could use at a house party to throw down a unique set to delight – or dismay – your guests. To a degree, it’s a digital DJing platform with stabilisers on, reimaged as a game. The very fact that the game is a little tricky to define or compare is hopefully a good sign.

Fuser will certainly be familiar to anyone who has played previous Harmonix output, especially with regard to the aesthetic, character, and tone. And your core aim remains the same: take to a lavish and slightly fantastical stage, perform, and please an energetic crowd, in this case as a DJ. However, Fuser arguably sits outside the traditional rhythm action definition.

“What’s different with Fuser compared to our previous music games is that every time you play, you’re creating something different, something new,” Harmonix director of marketing and communications Dan Walsh explains. “Your experience is going to change every time, even if you’re playing the same mission. That’s because you’re combining elements from different songs into something new as you play – as a by-product of your playing the game”

Hey now, you're a DJ

Ultimately, it will be Fuser’s track selection that sells you on the game, or not. At the time of writing, the full list is unknown. There’s no accounting for taste, but the 16 tunes available in the hands-on session at least demonstrated variety, covering pop, hip hop, R&B, dance music, rock, punk, and everyone’s favourite, Smash Mouth.

The other difference, of course, is that there are no plastic instrument-shaped peripherals to clutch or hammer. Instead you use a controller or – we presume – a keyboard and mouse. That move apparently favours accessibility and affordability. Guitar Hero and Rock Band’s plastic axes had a knack for bringing out the pantomime frontperson in all of us, but Fuser certainly feels like a game designed from the ground up for traditional inputs, with clear UI and fairly elegant controls.

“Accessibility is the big reason”, Walsh says, for resisting peripheral instrument controllers. “And it makes it a lot easier to get it to market in terms of figuring out manufacturing, shipping, inventory, and also a price point. It’s a lot more competitive when you’re not trying to get people to buy peripherals at the same time that they’re buying a core game. And it allows people to just pick it up and play.” 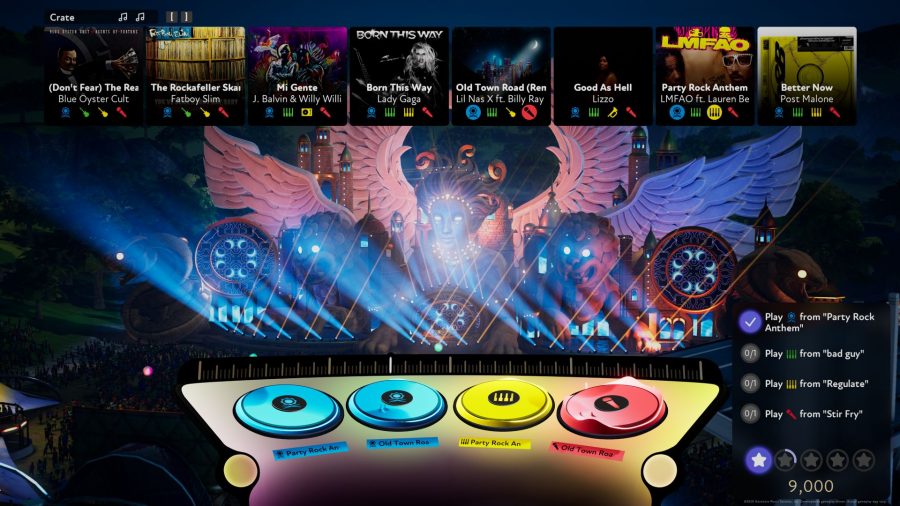 The way Fuser works is actually straightforward in principle. Using an interface inspired by CDJ players, you can approach each stage with a selection of ‘records’ in your crate. While our hands-on time didn’t allow for building our own, the notion of applying something comparable to the deck building or card drafting mechanics in board and card games is a beguiling one.

Instead, we went in with a preselected crate of 16 tunes to take to the opening of the game (the full release will include over 100). To begin a set, you throw down a single part of the available songs by re-enacting placing a vinyl on a deck. Perhaps a vocal, lead guitar, or drums. We began our session by landing the bass from Warren G and Nate Dogg’s Regulate, of course. Next, you can add elements from other tracks – maybe a Billie Eilish vocal and the piano from a piece of dance music you’ve never heard before. There are stillscores to chase and star ratings to secure, yet there is equally generous capacity for individual choice and expression. 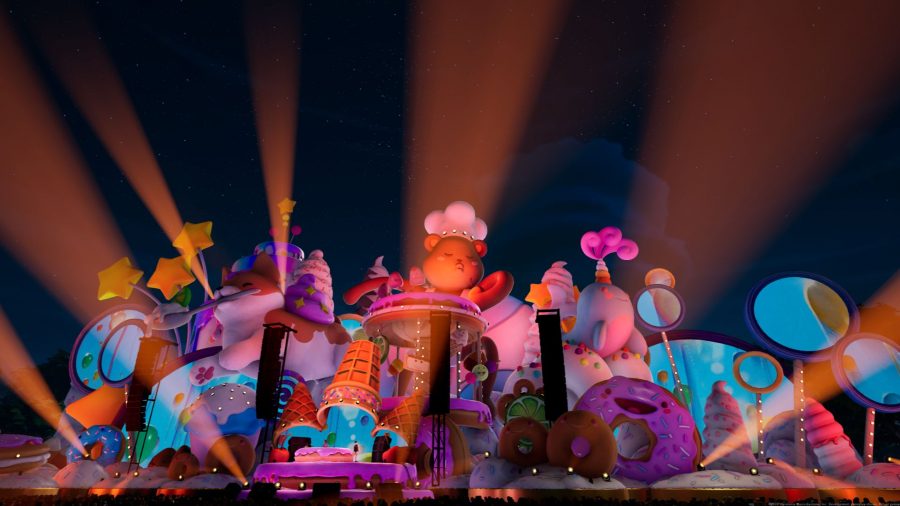 Fuser immediately and automatically matches key, tempo, and such, so that potentially very different pieces of music combine as something that sounds cohesive without you needing to understand anything like beatmatching. Then you can keep swapping out different parts of distinct tunes from your crate, moving through a set, or simply fire up all the strands of a single piece of music. In later stages not available in the preview demo, the hand-holding relinquishes much of its grip, leaving you with degrees more control and responsibility – and more opportunity to fail at win conditions. There are even simple instrument tools that allow you to build drum loops and so on from scratch.

In the early stages, though, you could play entirely freely and not fail a level. You’re soon encouraged to add music in time with the beat, if not at predetermined moments. Then the real art of DJing is introduced: satisfying the crowd while taking them on a journey. To one side of the screen the requests start rolling in; an audience member might demand a move to a specific genre, or the addition of an element of a particular tune. Those goals are essentially motivation to keep you on your toes, and to maintain the momentum and evolution of your performance.

Or you can slip into freestyle mode and just toy about with different combinations, mixes, and techniques. This might be the game setting that most captures the spirit of Fuser. You could even call it an ‘open world sandbox’, it’s just that the sandbox here is an imagined crate of records. In this way, Fuser does still deliver a fundamental shared experience with the earlier Harmonix titles it moves away from: it lets us act the fantasy of being a veteran musical entertainer. 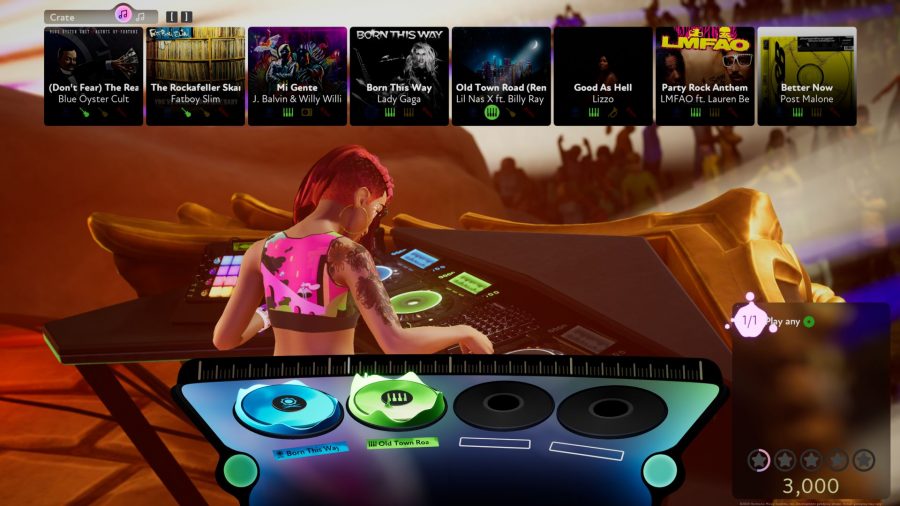 How engaging that will continue to be after extended play – and as the difficulty climbs – remains a mystery. Perhaps spending any time with the game will make one long for a plastic imitation deck. Maybe it will leave players eager to have access to more traditional modes. There are also multiplayer options and a mix sharing function, both touted as core to the game’s offering, but unavailable to try for now. Plenty remains uncertain.

But one thing is sure. We walked away convinced we probably did have it in us to be a beloved, enthralling DJ that knows how to whip up a crowd. That fantasy ended the moment a hand was next laid on a physical record, of course. But for a moment, Harmonix made it feel real.