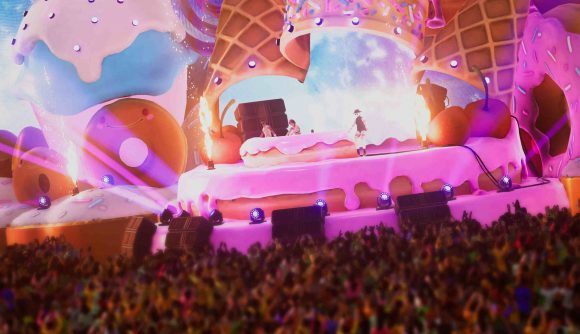 Harmonix’s latest game, Fuser, allows you to become the DJ you never knew you were. Featuring over 100 different tracks spanning several genres, the possibilities to create something genuinely decent are endless… but that also opens the door to a number of not-so-good possibilities. It appears some players are taking it upon themselves to discover what the worst mash-ups of all time truly are.

Fuser’s freestyle mode gives you the freedom to take the best parts of one song – say, the backing track of 50 Cent’s ‘In Da Club’ – and mix it with the vocal track of Smash Mouth’s ‘All Star’. The game will attempt to match the key, pitch, or beat in order to make your song sound pleasing. You even have the option to set these variables yourself if you’re feeling brave. It doesn’t take long to understand how some people might decide to use this power for evil.

“Some men just want to watch the world burn.” That has never been more evident until today. We’ve assembled a bunch of these, er, incredible mash-ups for you to listen to, because it’s only right that we share this disaster together.

Ever wanted to hear Rage Against The Machine’s ‘Killing In The Name’ with Dolly Parton’s ‘Jolene’?

Alright, but what about Donna Summer’s ‘Hot Stuff’ alongside Evanescence’s ‘Bring Me To Life’?

I mean, it also lets you jam Donna Summers and Evanescence together…https://t.co/v5pFi51jDz pic.twitter.com/lWUahC44Hz

Fuser is a lot of fun because it's basically just digital Dropmix and while I have made some decent mixes, I just want to share with you that Numa Numa and All Star fit perfectly together. That is all. pic.twitter.com/AD1xiWGznf

Please, no more. Instead, why not check out our Fuser review? Malindy Hetfeld scored the game a respectable seven out of ten. “A game geared more towards music lovers than high-score hunters,” says Malindy. “Fuser still feels like an experiment – but it’s one worth keeping your eye on.”