Before Fuser, there was DropMix. Harmonix’s first attempt at a music mixing game involved playing cards on a large electronic board, and it turned out to be too expensive and unwieldy to attract a large audience. But DropMix represented an idea Harmonix has held on to and tried to refine, resulting in Fuser, a game all about creating your own music using elements from different songs.

Fuser has a campaign mode, a freestyle mode, multiplayer freestyle, and multiplayer battles, so there’s quite a lot to do. The campaign takes you across 36 levels on six different stages, which also sounds like a lot, until it turns out that for the most part the levels take the shape of one long tutorial. Fuser takes its time to introduce you to your DJ toolkit and the different ways it can be used, putting an emphasis on not overwhelming you.

This is how it works: your screen is made up of four turntables, and above them a list of songs. Before you can start mixing, you need to decide on your song selection by going into your virtual crate and picking individual songs. The standard version of Fuser comes with 100 songs, the VIP edition gives you an additional 25. Each song you can use is restricted to a certain snippet, likely that which works best overall and doesn’t lead to dramatic changes in the time signature. If you want to change the beat, key, or pitch, you can do that manually, but that change will apply to all parts of your mix.

You won’t have access to all songs from the beginning – you can unlock more by spending tokens, which you gain for performing well in the campaign and levelling up your DJ. Each song is split into four sections: drums, bassline, melody, and vocals. Each turntable holds one of these building blocks. You can use each of these elements to create something new, but you don’t have to – you can choose to build songs with only three active turntables, or with two of them set to drums, or to two competing vocal tracks.

In its unapologetically hammy commercial, Fuser tells you that “anyone can be a DJ”, and on first glance it gives you the tools to keep this promise. In addition to the four turntables, you get a virtual synth pad on which you can play different instruments and create your own loops. You can take snapshots of mixes you enjoy and use them immediately in other levels, and you can preload your turntables to switch out all elements in one go. It’s a lot.

Unfortunately, it is also a lot, even though the campaign takes its time to introduce you to each new concept, dedicating whole levels to actions like muting parts of a song or the right timing of disc drops, which is an important way to gain points. That’s because beneath all that, there’s a game to be played, something to be won for points, and that’s where my problem with Fuser starts.

On each stage, Fuser introduces you to one or more tools, before making the conditions under which you have to use them more difficult over time. In the second stage – a kawaii monstrosity of plush animals, ice cream, and rainbow colours called Cherry Dip’d – I’m told about the existence of the synth pad to play instruments with, and a few levels later I’m faced with a timer telling me how long I have until I need to start using the pad or miss out on points. Meanwhile I’m also supposed to switch to a new drum track, while an audience member requests “something from the 2000s!” for the mix as if this is a wedding reception and not a huge music festival.

Seconds later another audience member wants to hear some violins. This is fine, I think, as my whole aural house catches fire and starts to crumble around me. Filling the requests is actually not the hard part – the trick is to create something actually listenable while you do so in order to keep the audience happy overall; a variable represented by a simple bar. Just like the Beatles have said, happiness is a full bar. 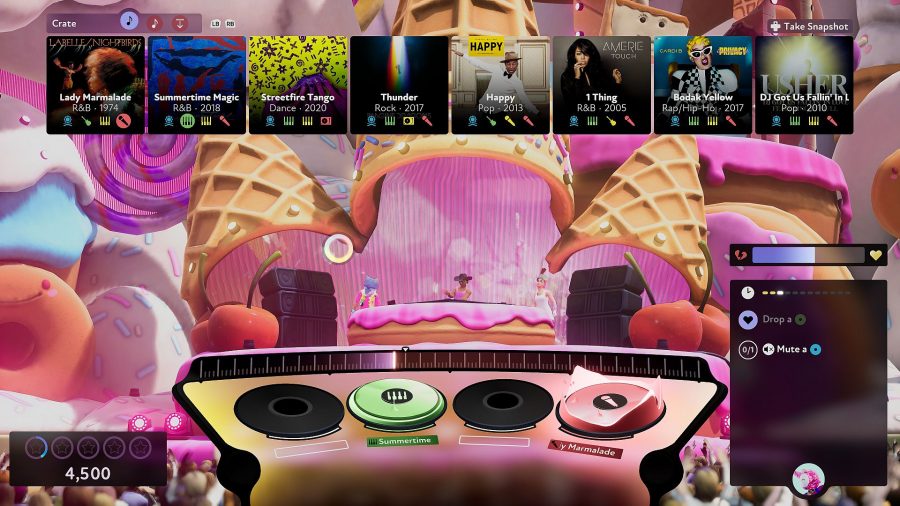 While I’ve never really figured out what the audience satisfaction bar measures, the campaign encourages you to keep things on the safe side. Several levels ask you to make genre mixes, so as long as you put a lot of Latin songs in your crate for one set, that works just fine, seeing as they’re similar in rhythm and instrumentation. Music sometimes feels secondary – your points seem to be mostly determined by you filling requests and tasks in a timely fashion, without changing things too much or too quickly. It’s safe, for example, to build your set from parts that mostly come from one song and then slowly work your way out from there – your digital audience will like it because it obviously sounds good, and if you drop new parts in only when the game tells you to, you’re in the clear. It’s also a bit boring.

Related: Check out the best rhythm games on PC in 2020

Fuser gives a lot of positive reinforcement. The promoters – essentially, characters that will comment on your actions on each stage – say things like “almost got it!” or “keep trying!” when you can’t fulfil a task, and if you want to make it through the campaign no matter what, you can enable a no-fail system with the simple press of a button. But you need points to buy songs, or fancy lighting effects for your stage, or new clothes for your avatar. It isn’t enough to just not fail. 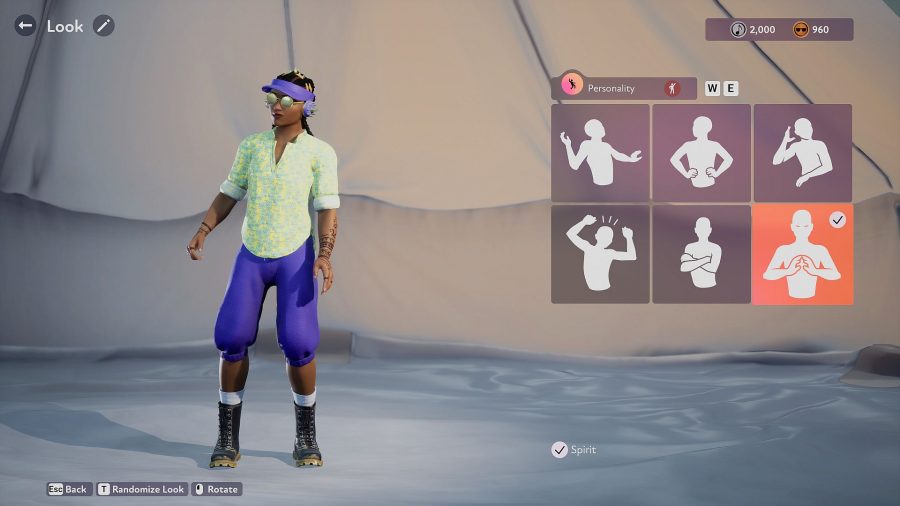 Games like Rock Band challenge your timing and memorisation skills, and in a way Fuser does that too, but with a lot more material. I had the most fun when tracks worked together in unexpected ways, like when the bassline from Blue Öyster Cult’s Fear the Reaper made a pleasant companion for Sucker by Jonas Brothers. The song selection itself won’t be for everyone, and that’s the point – you need to stay open-minded to a song’s potential even beyond genres like hip-hop and dance, which generally lend themselves more easily to being mashed up than others. The charm of the whole gaming experience, and even the mashup genre as a whole, is making things sound good that you didn’t think could possibly sound good together. This is why the list of songs cuts across a lot of different genres, including R’n’B, pop, country, and more. But in order to achieve those epiphanies, you have to go through a lot of trial and error, and you have to develop a good ear for each element of a track.

The campaign tries to turn Fuser into a game rather than a toy, but the game is at its best when you treat it like a toy

With its constant hectoring and arbitrary challenges, the campaign doesn’t give you the space to do all this, so it may come as no surprise that I spent most of my time in Freestyle mode. Basically, Harmonix put a lot of work into a campaign mode that would turn Fuser into a game rather than a toy, and thus avoid one of DropMix’s pitfalls, only to make a game that’s once again most fun as a toy. That’s not really surprising to me, seeing as Fuser’s whole premise is built on creativity. Creativity takes a bit of time. A real-life festival is a long affair for a reason, and in order to fit the confines of a level, Fuser tends to rush you during the campaign. On the other hand, if you decide to not put that time in, then it’s astounding how quickly even 100 songs can feel like a small selection – I’m sure future content packs will see to that, even though I’m sure we’ll never see a Fuser: The Rolling Stones. 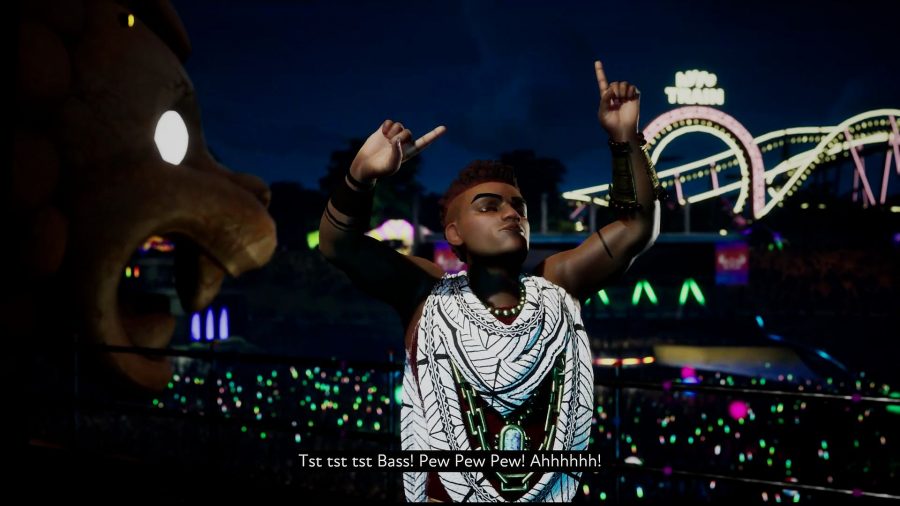 You’ll need a bit of time to get used to Fuser’s different components before you take on its multiplayer, especially the battle mode. This is a mode that rewards precise timing and the ‘strength’ of a mix, by dropping tracks perfectly on the downbeat or finding the songs that fit a given mix well. Neither element is immediately intuitive, so like the training mode in a fighting game, freestyling gives me time to learn the ropes at my leisure before inevitably getting annihilated by players from around the world.

On a more technical level, the freestyle mode also gives you the time to get used to Fuser’s slightly fiddly controls. Using a controller is encouraged, because with it each part of a song responds to a specific button, whereas with mouse and keyboard you have to click on each symbol and move through your crate with the W and E keys, both of which take me longer than simply using the controller buttons. I do find the controller cursor a bit sluggish however, no matter what speed I set it to – it resists me dropping tracks on the turntables I choose, and never quite lands where I place it.

On the horizon: Check out these exciting upcoming games

What it all comes down to is this: Fuser’s design encourages you to do the unexpected, but it wants to layer over that with the familiarity of traditional gameplay for points. Some people will revel in the initial stress and see it as a challenge similar to that of rhythm-based gameplay, but to me these are essentially very different things, just like actually DJing is in truth a very different thing to Fuser’s facsimile of it. I’m most excited to see what people end up making if they respond to Fuser’s planned community challenges, and not at all in watching streamers get a high score, for example. At this point it’s genuinely difficult for me to tell what long-term appeal Fuser will have, but I’ll be happy to invest the time.

A game geared more towards music lovers than high-score hunters, Fuser still feels like an experiment – but it’s one worth keeping your eye on.