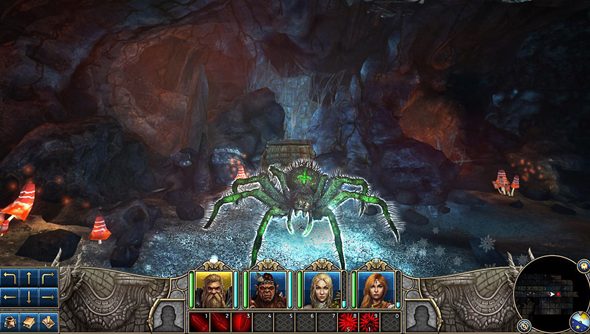 Might & Magic X: Legacy isn’t a Dark Messiah, a Heroes of, or a Clash of Heroes sequel, worthy though those spin-offs are. It’s a proper, tile-based underground waltz with deadly, oversized spiders, and if that’s your favourite thing there’s every chance you’ve been playing it for five months now, in ‘open development’.

If you’re marginally less but still quite keen on the idea of a big publisher follow-up to indiedom’s Legend of Grimrock, though, you’ll get to play it for the first time in dramatically more polished and entertaining state come January. Such is the slightly topsy-turvy world of contemporary PC games-making.

What does Legacy have over Legend of Grimrock, you ask? Outside bits. See some of those in the feature video below – plus words from Limbic Entertainment head Stephan Winter and publisher-appointed lead designer, Julien Pirou, on how a Ubisoft project can draw lessons from the indies:

For the past five months, Limbic’s open development process has been hosted mainly on their blog, where they’ve tracked progress and put design decisions to the public vote. Like every other community in PC gaming, M&M’s was eager to share its opinions, and a number of principles emerged: a focus on player choice, meaningful interaction with the environment, and hidden side quests.

Players weren’t too shy, either, to let Limbic know that Legacy’s day-night cycle was “way too fast” – and the developers have since seen to that.

I’m not a longtime player of proper Might & Magic, and don’t know how I feel about that endearingly wonky, traditionally tile-based movement system being applied to a wide-open world, rather than tight corridors. What do you lot reckon?