In one of the barmiest, most ambitious announcements we’ve heard for a while, G2A told us at their media day on Friday that they are preparing a service for printing, painting and shipping 3D models of videogame assets to customers. Ultimately, they hope you’ll be able to do it just by pausing a game and clicking a button.

Which models would you print from the best PC games ever?

G2A started life as a marketplace for videogame keys, but they’re announcing several new adjacent products. G2A 3D and 3D Plus are two of the most interesting, and represent G2A’s push into gaming merchandise.

The G2A 3D store hosts model files for 3D printing and is live now, but in its infancy; its inventory is mainly CS:GO weapon replicas, and it’s not charging prices yet (everything is available for free, if you happen to own a 3D printer).

So far, so ordinary. There are plenty of places online where you can trade these files already. G2A 3D Plus is what will make the service special, says director of strategic development Patryk Kadlec, who uses words like “ecosystem” and “value chain” a lot. For anyone who’s seen something cool in a game and wants a physical version to put on their desk, G2A 3D Plus aims to be an end-to-end service to deliver exactly that.

G2A are “developing the tools to grab 3D objects directly from game engines, like Unity, like Unreal”, says Kadlec. Ultimately, G2A hope that during normal gameplay, you’ll be able to “push a pause button in your favourite scene, say you’re killing a boss, and then you are able to pull the [model] data from the game engine directly.” That data is then validated (not all poses or objects are physically printable) and an STL file is created. 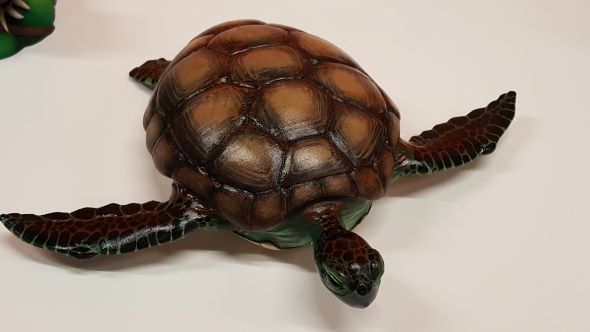 The next step is customisation. “Let’s say you have a tank in a game, and you want your logo or your paint to be specific to your character, or a nickname, or any other customisation. We’ll be introducing this in the next iterations,” says Kadlec. At this point, he produces an impressive figurine of a footballer in Liverpool FC kit.

“It’s me,” he grins, and on closer inspection, the face is a pretty good likeness. “It’s based on just a picture from the front and one from the side.” So one day, with a couple of photos, you’ll be able to print a copy of your avatar from your favourite RPG, and replace the face with your own.

I ask about the painting – which is excellent – and Kadlec confirms G2A have hired a team of in-house painters, but will be inviting artists from around the world “to contribute to the system” in the next phase as they scale the project up to a global service. This will give painters, 3D graphic designers, modelers and artists of many stripes a potentially vast new source of commissions.

Star Wars made more than $5 billion on its merchandise alone, says Kadlec. “Developers are really focused on developing the game itself, to make cool gameplay, and so they don’t think – in the first stage – about merchandising, figurines, T-shirts and all that kind of stuff.” G2A 3D Plus aims to be a ready-made ecosystem – there’s that word – which developers can use to tap a new revenue stream with minimal fuss. A royalty or revenue-share deal with G2A is all that’s needed.

If it means more and cheaper gaming merch for us, and more developers getting in on this lucrative market – even indies – this is a potentially transformative idea.