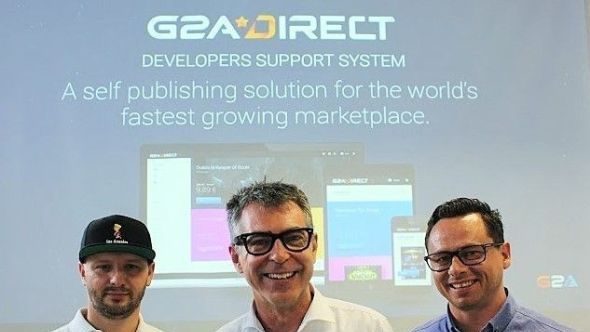 Update December 4, 2016: G2A Direct is off to a strong start, having signed up 50 developers in the four months since its announcement, with more in the pipeline.

G2A, the digital marketplace for videogame keys, have apparently been taken aback by the popularity of G2A Direct, the developer partnership scheme they announced at the end of July.

After cheap games? How about nothing at all? Here are the best free games we’ve ever played.

The news comes via Mario Mirek, G2A Direct account manager, at G2A’s media day on Friday. “At this moment we have more than 50 developers,” says Mirek. “It’s taking us a long time to get them onboarded, because when we launched Direct we weren’t expecting to get such a good response.”

Studios that have so far signed up with G2A Direct include the SuperHOT team; Hi-Rez, who make Paladins, Tribes: Ascend and Smite; and Playrise Digital, makers of Table Top Racing. Other software developers include What The Fast, a US company that facilitates low-ping services for shooter fans.

Talks are ongoing with other devs, Mirek says, so expect more partnership announcements “in the coming months” as G2A streamlines its onboarding processes.

Besides setting out the success of the scheme so far, Mirek’s talk highlighted its key selling points. These were outlined in the initial announcement (see below), but most notably include an 89/11 revenue split between developers and G2A (Steam offers 70/30); up to 10% payments on top of third-party sales (something “no one has done before” according to Mirek); and support from G2A with marketing and promotion. Membership of the scheme is free; all the developer has to do “is basically decide to join”.

Mirek concluded by mentioning one last feature: the ability for developers to query keys listed on the marketplace which they suspect of having been obtained fraudulently. G2A are no doubt hoping that moves such as this will restore customer faith in their marketplace after a particularly nasty listing of fraudulent keys earlier this summer earned them a truckload of bad publicity.

We’ll have more on what else G2A are doing in this regard over the next few days, but in the meantime, what do you make of this rush of developers to G2A Direct?

Original story July 29, 2016:As part of their announcements last month that they would be working more closely with developers, G2A have now launched their official partnership scheme. This allows devs to shack up with G2A to sell games on their service, and provides a number of other benefits – such as the promised10% G2A marketplace royaltyoption on third-party sales, and access to G2A’s backend to query game codes and combat fraud.

That last is fairly interesting. It’s always assumed that a lot of these sites are kept afloat by teenagers with lower disposable income, combined with the site’s skin trading section drawing in the famously younger CS:GO crowd. Seeing it as an actual selling point for their service is a different angle.

“This project with all its features, easy payment, 24/7 support, security and custom storefront, will be a major contributor to G2A’s future growth,” says head of business development Patryk Kadlec. “I have no doubt that developers and publishers will be pleasantly surprised at the results that can be achieved by directly engaging with our customers. G2A Marketplace is one of the biggest destinations in the world for gamers and that means opportunity to find new audiences for your games and intellectual property.”

Developers who are interested are advised to email [email protected] As buyers, how do the changes G2A have made affect your opinion of them? The backlash towards the company after the various allegations by TinyBuild was extreme – is that still how gaming communities feel?