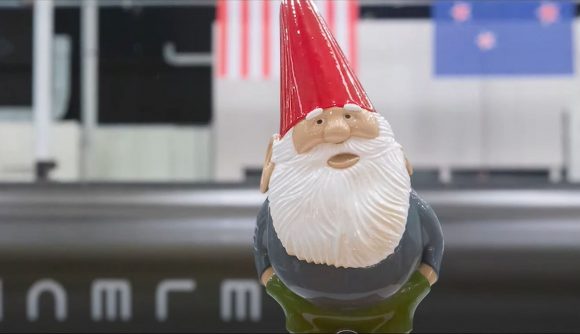 If you’re a fan of Steam, rockets, and, er, jolly hat-wearing garden ornaments, you might know Valve founder Gabe Newell is sending a garden gnome into outer space to help fundraise for the Paediatric Intensive Care Unit at New Zealand’s Starship Children’s Hospital. The exact date and timing of the event weren’t quite clear in the initial annuncement, but now we know when Gnome Chompski will make his glorious debut into space – Newell has announced launch day is tomorrow.

“Tomorrow is officially launch day for Gnome Chompski!”, Newell’s car racing charity team The Heart of Racing announces on YouTube, alongside a clip of Newell bidding “bon voyage!” to the spacefaring knick-knack. That means you can catch the launch in just a matter of hours from now, at 14:44 NZT on November 19 – so 17:44 PT / 20:44 ET on November 20, or 01:44 GMT on November 21.

The event is a collaboration between The Heart of Racing, Rocket Lab, and Lord of the Rings special effects, props, and sets maker Weta Workshop. For every person who tunes in to the gnome’s launch into space via Rocket Lab’s livestream here or Twitch channel here, $1 will be donated to The Starship Foundation.

“Hopefully fans of Half-Life and Left 4 Dead will get a kick out of this,” Newell says in the clip below, “but more importantly, we’re going to raise funds for the Starship hospital,” highlighting that viewers can also choose to donate to the charity by heading to The Heart of Racing’s NZ site here.

Newell has been based in New Zealand since March this year, having been visiting the country when the COVID-19 pandemic broke out round the world. Since then, he’s created a New Zealand-based car racing team to raise funds for The Starship Foundation and helped organise a free ‘thank you’ concert to say cheers to the country.