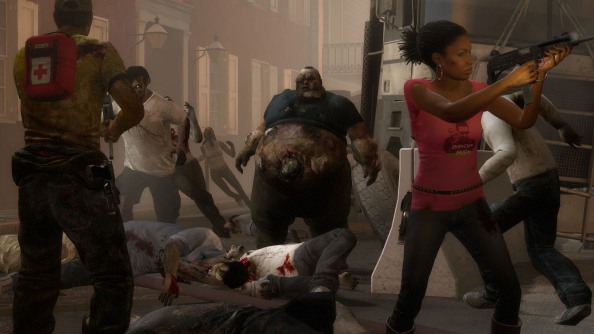 Valve’s management structure might be flatter than Gordon Freeman voiceover as viewed in Audacity, but it’s a private company directed by Gabe Newell. And if the “most not your boss” member of Valve is all for knocking down the barriers of platform and embracing a cross-play future, well – that’s probably a good sign for the leading digital distribution platform he happens to control.

Like to play with accompaniment? Here are the best PC co-op games.

One Timothy Rogers of the PC Master Race subreddit emailed Gabe, as Valve fans are wont to do, in an upfront attempt to convince Valve’s co-founder to “open the gates” for cross-play gaming.

The benefits Mr Rogers points to are self-evident: communities undivided by arbitrary console choice; easier matchmaking in multiplayer; an end to platform exclusives. “Opening up multi-platform multiplayer gaming IS the next step to a better gaming community,” he argues.

Platform unification is not an idea Valve are new to. Their Steam Play initiative allows users to buy included games just once but play versions on Windows, Mac and Linux. Meanwhile, Sony have begun sharing purchases and saves between PS4 and Vita on a growing catalogue of games. If we could only smash through the corporate walls that separate us from the consoles, we could do more.

Would you make use of industry standardised cross-play, do you think?