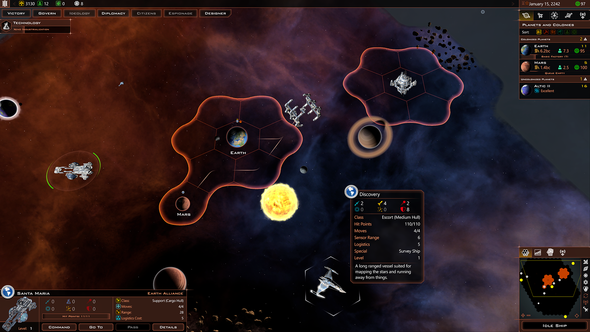 Galactic Civilizations is the absolute grandaddy of grand strategy in outer space. Originally developed as a native OS/2 game back in 1993, the series has consistently garnered critical acclaim and has become a staple for anyone who needs to scratch that world-conquering itch. The latest installment, Galactic Civilizations 3, is no exception and received a rather glowing review from our very own Fraser Brown back in 2015. Fans are now looking forward to the upcoming ‘Crusades’ expansion which will add espionage, a custom faction builder and a revamped invasion system. However it is the addition of galactic citizens which Stardock are putting under the microscope in their latest dev diary entry.

Explore, expand, exploit and exterminate your way through our list of the best 4X games.

What are galactic citizens? Well, much like in real life, the economy of a society can be greatly influenced by a specific person in a position of great influence. For example, I personally refuse to eat chicken unless it is made by an old man with a white beard and glasses, such is capitalism. Much like the colonel, galactic citizens will have an effect on a specific element of planetary society. They can be left in the capital to make this bonus global, or alternatively they can be sent to a specific planet to give a large boost in that small area. A citizen like the engineer will give a 3% boost to global fleet production, but he can also be sent to a specific planet, boosting its fleet production by a massive 25%. Once a citizen has settled, he isn’t moving, so a large part of the strategy will be in determining where to deploy them to best suit your empire going forward.

The two big concerns on the lips of many veteran strategy gamers will be micro-management and balance, but Stardock assure us that they’ve got it covered. There will be easy ways to move and manage your citizens and the resource system has been heavily altered to accommodate the inevitable shake-up in balance that will be caused by the addition of galactic citizens.

You can pick up a copy of Galactic Civilizations 3 on steam right now for $39.99/£29.99, as well as the Lost Treasures and Altarian Prophecy DLC packs. Crusades is currently unavailable for pre-order, but you can keep an eye on the official website for more details and updates.