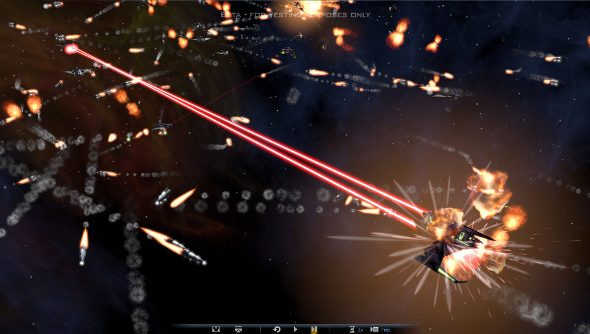 You know what’s better than a sequel to a great story? A prequel. Yeah, as George Lucas will attest, nothing beats finding out just exactly how a bunch of things you already know happened actually happened. Oh, and meeting Jar Jar Binks is pretty awesome, too.

Like games that get you thinking? Have a look at the best strategy games on PC here.

Thankfully, Galatic Civilizations III’s prequel-based DLC Rise of the Terrans looks like it’ll be slightly more compelling the first three episodes of Star Wars, with play taking you back to the first days of Earth’s Terran Alliance.

“Destiny might be calling, but you’re not alone and not all races are especially friendly,” offered lead designer Paul Boyer. “After humanity discovers how to build a Hyperdrive and starts to explore space, they run into all sorts of new races and situations that eventually culminate in forming the Terran Alliance. It’s always been a pretty cool story to us, so that’s what we wanted to cover in this new campaign.”

That and they wanted to make a bit more money, too. Which is fair enough, given Rise of the Terrans won’t set you back all too much, coming in at a rather manageable $4.99/£3.99.

Also included in the DLC is the United Earth faction, led by Secretary General Mathews. Stardock claims the new faction comes armed with the ‘experienced’ ability, which “allows their ships to gain experience from battles and surveying anomalies more quickly.”

Players will also encounter fresh enemies such as the Xendar Menace, and the studio claims each choice they make “will have an impact on the future of humanity.” It doesn’t get much more dramatic than that.