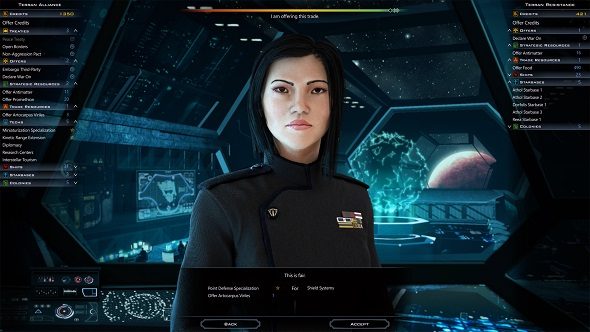 Hoping to expand on its base feature set, developer Stardock have announced that the Crusade expansion for Galactic Civilizations 3 will launch on May 4. Adding in a custom civilization creator, alongside new starbases and special galactic-level missions, this expansion is set to give players more options in growing their own interstellar empire.

For those looking to expand their influence, check out these great PC 4X games.

One of the main draws of this Crusade expansion is the civilization creator, where players can create their own race of alien, right down to the ships they pilot and even their specific diplomatic responses. Once created by the player, these custom civilizations can be shared online for use by any other player in their own game. From little green men to multi-armed monsters who only communicate via space farts, the civilization creator is suitably robust for players wanting to create outlandish alien races. This update also adds pre-made factions alongside the civilization creator with the plucky Terran Resistance, the insectoid Onyx Hive and cybernetic space amoebas called the Slyne.

Once you have created your new race of hyper-intelligent horse people or whatever you fancy, Crusade’s new citizen system allows players to specialise their best and brightest minds down certain career paths. Those gifted in commerce can be trained up as entrepreneurs, strategically minded citizens can be turned into commanders while the more devious members of society can become spies. The espionage system in Crusade gives players the ability to infiltrate other civilizations to steal research and even assassinate key figures on other planets. Beware that your civilization can also be targeted by spies, so keep a watchful eye for any moles in your midst.

In the late-game, players can set up special galactic missions, ordering their citizens to collect resources, discover new technologies or spread the word of your amazing culture. Designed to make the mid to late-game more engaging, these missions will see civilizations of all stripes mobilising their forces to build up their prestige on the galactic stage. If you’re looking to launch your invasion of neighbouring planets, this is the time to do it.

Besides these major updates, Crusades brings a smattering of smaller tweaks like AI improvements, balancing each pre-existing civilizations and many more under-the-hood tweaks. While a price has yet to be announced for the standalone version of Galactic Civilizations 3: Crusade, Stardock have confirmed that the base game and Crusade will be bundled together as a $39.99 package. Keep your eyes locked on the Galactic Civilizations Steam page for all the latest.