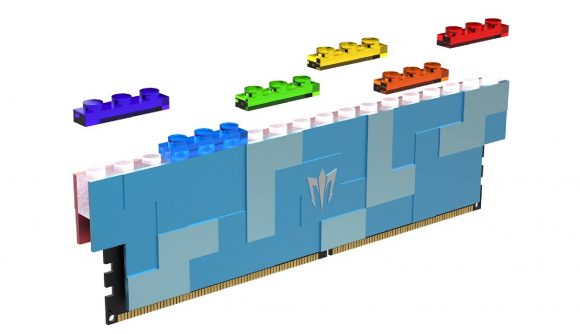 In many ways, building a gaming PC is a bit like playing with Lego. Sure, the process behind choosing and assembling PC parts is a lot more complicated, and nerve-racking when it comes to installing gaming CPUs, but the way modern rigs snap together is arguably as cathartic as playing with plastic bricks. Thanks to the Chinese brand Galax, building a new rig can now actually involve playing with the creative toy, as the company is set to release Lego compatible RGB gaming RAM.

Spotted by Expreview, Galax’s new Gamer branded DDR5 RAM isn’t just inspired by Danish building blocks, it also features RGB lighting built into the interlocking strip at the top. Naturally, this means you can use clear Lego bits to create a unique lighting setup, as each piece should act similarly to a light pipe. Failing that, you can also just snap any bricks or mini-figures you like, although admittedly, building a Lego house onto these might look a bit like that scene from Inception.

Toy aesthetics aside, Galax’s Gamer DDR5 RGB memory will initially launch as 2x16GB kits, but 2x8GB and 2x32GB configurations will release in the future The RAM will also offer a channel speed of 4800MT/s, but Galax hasn’t said whether overclocked alternatives will also release at some point down the line.

Of course, this isn’t Galax’s first foray into Lego compatible components, as the company previously released an Nvidia RTX 3090 Gamer edition graphics card with a similar premise. Unfortunately, just like the rest of Galax’s Gamer range, the Lego infused kit will be exclusive to China. 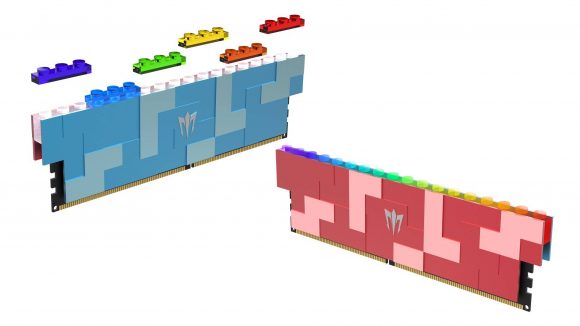 So, if you’re looking to transform your rig into a colourful brick canvas, like this nifty GTX 1660 Lego gaming PC, you might have to go out of your way to import Galax’s quirky RAM for your build. Nevertheless, if you’re working towards creating a PC that’s almost entirely made out of blocks using Galax’s new memory modules is kind of a no-brainer.