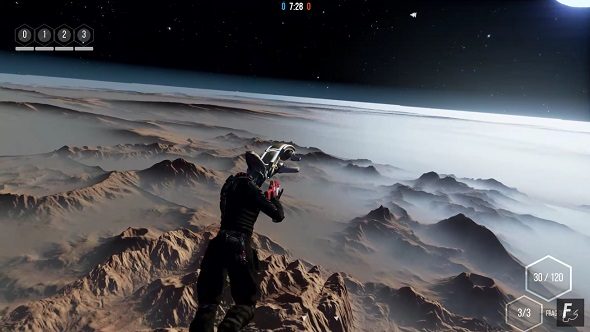 Frontwire Studios were creating a Star Wars Battlefront sequel in the style of the classic series until EA were forced to protect their IP. Luckily, the studio didn’t lose all their work. Instead, they repurposed it and wrapped it around their own bespoke universe.

If you want more gaming for nothing, check out our list of the best free PC games.

Basically, Galaxy in Turmoil, as the game is now called, will be Star Wars Battlefront 3 in all but name. It won’t have Jedi, but the world will probably have its equivalent. Dark rapier duels, anyone?

It’s in alpha at the moment, so presumably the full game will feature some kind of propulsion system and not just have you swimming through space, but it’s still looking like a lot of fun.

You’ll be free to fly between the planet surface and space, and you can even float out to vehicles parked in the void.

The team seems to be making good progress, as you can see in the video above. In another recent video, Frontwire showed off one of Galaxy in Turmoil’s maps.