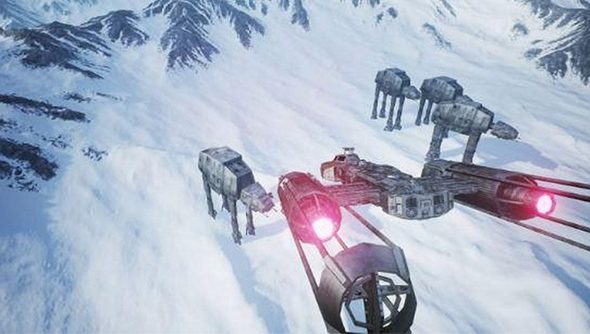 Like official releases over fan made games? Check out the best Star Wars games on PC here.

For some context, Galaxy In Turmoil is currently in development at Russian outfit Frontwire Studios and is billed as a remake of the never released Star Wars Battlefront III – a follow up to the first two Battlefronts handled by Free Radical.

Battlefront III was reportedly nearing completion when it was cancelled in favour of DICE’s Battlefront, which eventually launched in November last year. Some fans, however, were not happy, and it’s been Frontwire’s goal to recreate Free Radical’s version ever since, even though LucasArts has consistently refused to confirm it ever existed.

It’s a move that would appear to put the Russian outfit in some rather hot legal water, though the decision to offer the game for free – and, as such, make no money from it – means it could side step any ceast and desist request from Star Wars’ owners Disney. Indeed, the news that Valve has agreed to distribute Galaxy In Turmoil on Steam suggests it too is confident Disney will allow the project to proceed.

“It is with great pleasure that as of today I am able to officially announce that Frontwire Studios has officially signed a distribution deal with Steam/Valve for the game Galaxy in Turmoil,” revealed Frontwire president Tony Romanelli.

“After ongoing discussion between Valve Representatives and myself, Valve/Steam has agreed to ship Galaxy in Turmoil to it’s millions of users for free. While this is undoubtedly a big step and accomplishment for Frontwire Studios itself, it’s an even bigger step for you, the community.

“By Steam agreeing to ship Galaxy in Turmoil we are not only adding more validation and awareness to the project by opening up the game to a whole new audience, we’re also cementing Frontwire Studios’ reputation as an up and coming developer with the opportunity to now publish our games on Steam in the future. This will help us ultimately achieve our goal of making the games that you, the community want.” 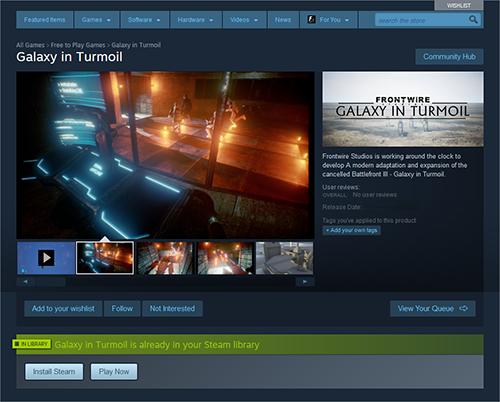 Romanelli admits he has had “mild concerns” that Disney would move to halt the project, but notes Valve’s decision means it “clearly lacks that same concern.”

“I encourage everyone, including those that doubt we’ll be able to pull this off, to take a page from Valve’s book,” he concludes. “Take a deep breath and just take a chance on our project. In the end, it’ll pay off for everyone involved. Especially the community.”

Along with the statement, Romanelli also offered a screenshot of the game’s page on Steam, though it does not yet appear to have gone live. We’ll keep our eye on this one