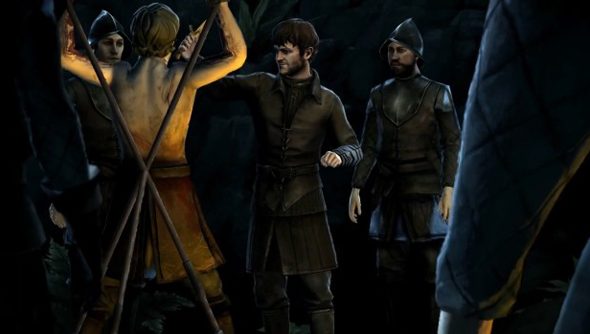 Oh, crikey. I don’t know if you’ve seen our Fraser’s Game of Thrones: Iron From Ice review, but it’s not all winter sunshine and war of the roses. Apparently, Telltale have been overly cautious about laying the foundations for a new series and wound up with something much less compelling than Tales from the Borderlands.

Better have a look at the launch trailer, and decide for yourself whether you think Telltale will manage to scale The Wall and land more satisfying blows in future episodes.

We join the Forresters, a northern house walking on an axe’s edge. They’re nominally loyal to the Lannisters in King’s Landing – but also engaged in a long-term feud with Lannister allies the Boltons, home of the show’s sadistic Ramsay Snow.

He creeps in as the trailer’s antagonist, dripping menace and disregard for the player character’s house and home. We can only imagine that’ll lead to inter-clan explosions by the end of the episode.

“What you do will have repercussions,” pitches Peter Dinklage of the game. “Your family will be at risk, no matter where they might be.”

You can find Game of Thrones: Iron From Ice on Steam. I’ve noticed a couple of Twitter types complaining of a missing install button on Steam – so do let us know how you get on, won’t you?