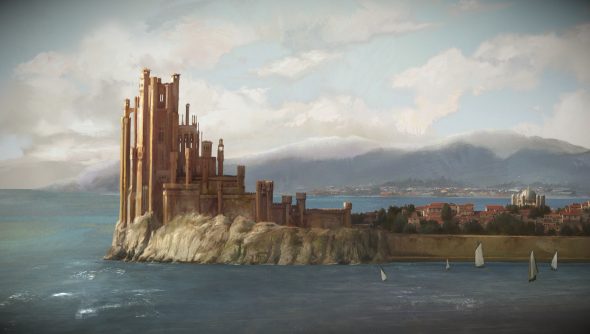 Skip to Page 2 for our review of Game of Thrones Episode 2 – The Lost Lords.

Almost two decades of novels, short stories, comics and HBO’s television adaptation weigh down on Telltale’s Game of Thrones, the first episode of which – Iron From Ice – can soon be in your hands, or at least your Steam library.

With The Walking Dead, The Wolf Among Us and most recently Tales from the Borderlands, the studio has deftly taken existing worlds, played with them, and made them their own while still honouring the source material. But this time, we’re off to a less auspicious start.

The weight of George RR Martin’s fantasy realms is a burden, leading to an episode that is overly cautious and, ultimately, rather dull. 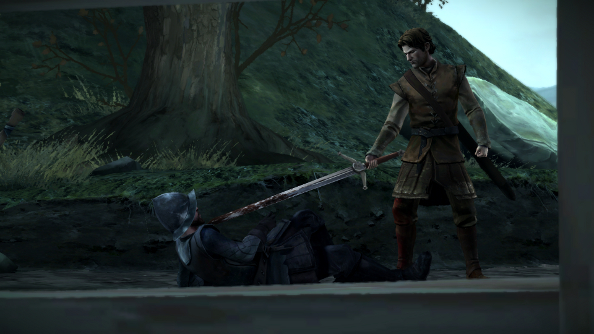 If you’ve read A Song of Ice and Fire or watched the HBO series, then you’ve pretty much played Iron From Ice. The story of House Forrester, the northern noble house whose members make up the protagonists, is essentially the story of House Stark. But, lamentably, significantly less interesting.

Every character is an analogue for a member of the Stark household: the young man heading to The Wall, the girl trapped in a gilded cage in King’s Landing, the Lord who comes to power before his time, the commanding mother – you’ve seen it all before, in this very world. Entire scenes are almost lifted right out of the TV show and books, masquerading as something new, offering little in the way of fresh perspectives.

Do we really need to see a slightly timid girl getting interrogated in the throne room at King’s Landing by Cersei, who sneers and snarls about the treachery of Northerners? At least she’s had practise with Sansa. At this point, Lena Headey could do this in her sleep, but she still manages to give an imposing performance. 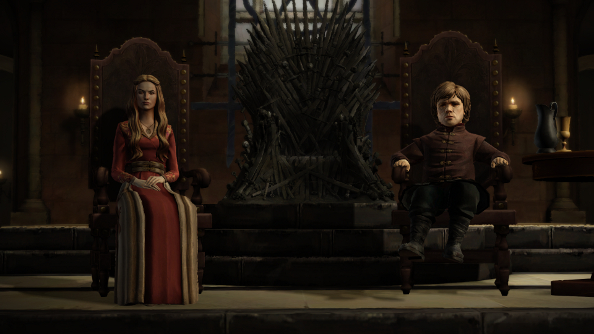 I feel like I can’t help but be cynical here: Iron From Ice is like a 2-hour advert for HBO’s show. A few cameos here and there and lots of bouncing around between the North and King’s Landing, with the promise of Essos next episode, it’s all very forced, all too familiar.

Filler – that’s what it is. It’s something to occupy the diehard fans while they wait for the new season, with exactly the same kind of plots and intrigue you expect from its big brother, but without the characters you know and care about, just cheap knock-offs.

There’s the tiniest hint of personality slowly seeping out of the three characters – Gared, Mina and Ethan – we’re given control over. A moment here, a line there that suggests that these people are more than simple copy and paste clones of their fleshed out Stark counterparts. But Iron From Ice doesn’t give us much time to get to know them enough to empathise with them. 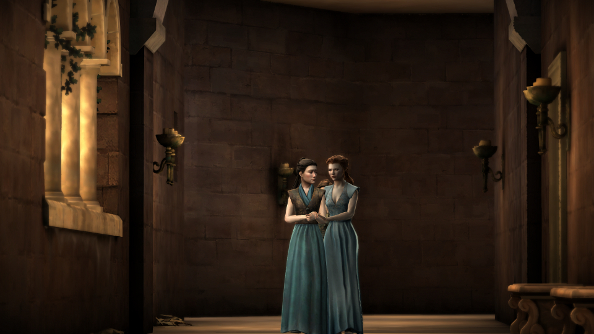 The episode follows the structure of the books and show, jumping between characters and locations quite quickly, and the flaws of this structure have never been more apparent. What we’re left with is three introductions and not much more. Just when things get interesting, we’re whisked off to King’s Landing or back up north, sometimes after only getting a few minutes and a short conversation before we’re uprooted once more.

What these poorly-treated Forrester kids – it is a bit unusual that the three protagonists in this episode are all very young and naive – actually do when they get their chance to shine isn’t particularly compelling, either. Meetings, that’s about it. Meetings around tables, meetings in courtyards, meetings on a balcony.

During these meetings, at least, Telltale’s trademark big, meaty decisions do appear. It’s one of Iron From Ice’s few saving graces that the options are extremely hard to choose between, and appropriately complex for a franchise that thrives on intrigue, lies and words with weight. Here, the studio and the source material come together comfortably, and watching as that bar rapidly erodes, counting down, forcing you to make a decision quickly, is as tense as its ever been. 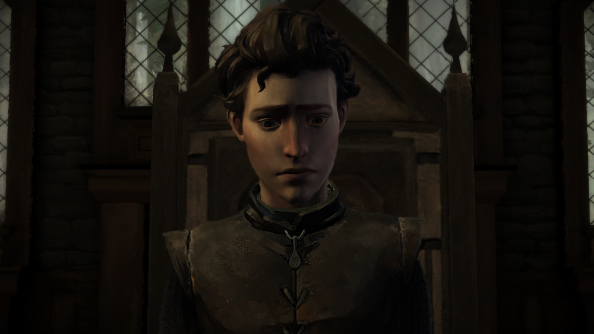 Getting command over an entire noble house as Ethan reminds me of my time in Lee’s shoes, in the first season of The Walking Dead, but instead of worrying about a rag-tag group of desperate survivors, the fate of hundreds of people rests in my hands. A simple choice between who to pick as my second in command suddenly becomes a much larger decision: how will who I pick affect the people under my care?

It’s just a shame that it’s all restricted to those bloody meetings. There are very few scenes that feel natural, with little in the way of innocent conversations that allow characters to grow. It’s in stark contrast to Tales from the Borderlands. I cannot wait to get back to Fiona, Rhys and their gang, and I already feel like I’ve got a handle on who they are and how they would act in a variety of situations. There’s none of that in Game of Thrones. I had to launch the game again while writing this, just so I could find out the protagonists’ names, so forgettable are they. 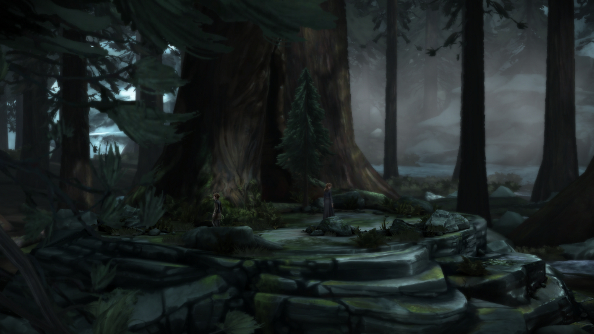 At least the game is gorgeous, with Telltale really pushing its struggling engine to its limits. It’s probably a good thing that only one action-packed sequence makes it into the episode, because it was shaky and slightly nauseating. It’s like driving on jagged rocks while looking at stunning scenery. Character models are mostly what you’d expect from a Telltale adventure, but everything has been painted over with a watercolor filter that’s incredibly striking.

These episodic adventures absolutely rely on interesting characters and emotional investment, because they don’t really have much in the way of traditional systems. There are no puzzles, no pixel hunting, nothing other than conversations and quick-time events. Iron From Ice doesn’t even have much of the latter, either. Absent gripping protagonists or a different take on this already well-trodden world, it doesn’t offer very much at all. It’s basically a re-run of HBO’s show, and you can already watch that on the telly. 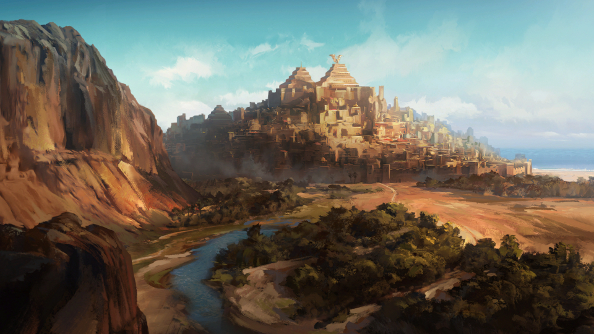 The second episode of Telltale’s Game of Thrones, The Lost Lords, starts a little like the first, with plenty of grisly fighting and bloodshed. But unlike its predecessor, it continues to punctuate the many, many chatty meetings that the four protagonists have with action, improving the pacing dramatically.

We find ourselves following two more protagonists, along with Mira and Gared, filling in the gap left by Ethan’s shocking demise in the last episode. The first is Asher, a Forrester estranged from his family, living as a sellsword across the sea. He’s a bold, cocksure, hot-headed fellow, which is something Iron From Ice sorely lacked. 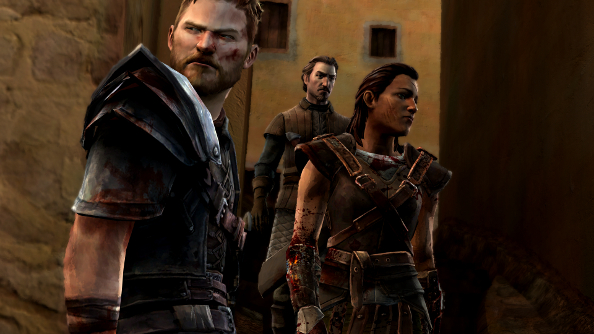 Asher’s sequences are mainly concerned with fighting, but we also learn a bit more about why he was sent away from his family, and how the years have made him a little more understanding. Importantly, he’s got a sense of humour. Asher breaks up the misery that pervades many of the scenes back in Westeros, with drinking, scrapping and cracking jokes.

Unfortunately, like Gared in the last episode, Asher’s ignored for most of the episode. He, along with his uncle and a sellsword chum, sets off on a mission that could save his family across the sea, promising some adventures in episode three, but The Lost Lords could have done with more of this Forrester wildcard.

The second new protagonist is one giant spoiler, so I’ll only say that he ends up doing much of what Ethan did previously, but is slightly more interesting to follow. Ethan was a naive child, and it got a little bit tiresome, watching him wander around, not quite knowing what to do. After Ethan’s death, Ironrath was filled with Whitehall soldiers, and continues to be so. Wandering its streets and halls is like visiting an occupied city that’s one cinder away from exploding. Every word and action seems to push it closer to some awful, inevitable confrontation. 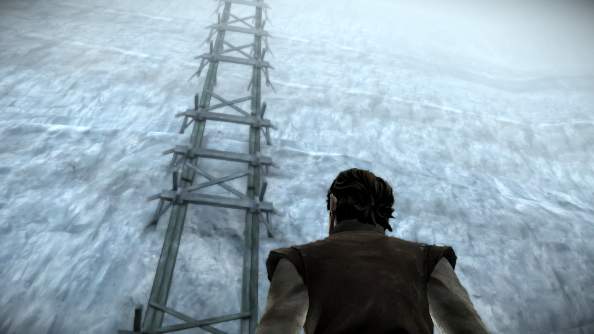 Further north, Gared makes up for his limited time in the sun in Iron From Ice by getting a lot more attention this time around. He’s joined the Night’s Watch now, so he’s holed up in Castle Black, watching The Wall. Despite an unnecessary training session that tests one’s ability to move a mouse and hit some QTEs, his time in Castle Black has, so far, been tense and rich in small, but important decisions.

He’s tested a lot, is Gared, and his Crow peers and masters constantly push him to see what kind of a man he is. While Mira’s sequences in King’s Landing are the most riddled in intrigue, there’s a more primitive version of it in Castle Black. A game is being played, with the new recruit needing to step carefully. 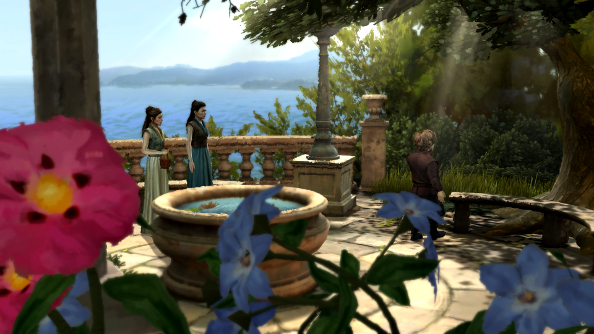 And speaking of Mira, her life in King’s Landing has become significantly more dangerous and her position more tenuous. Her relationships with Tyrion and Margaery push her to become more savvy and sly. Just like Gared, she’s learning how to play a new game, but this one is full of vipers. While her position is now rather interesting, she remains a rather dull character, very much the Sansa of the series. There are a few sparks, though, and I wouldn’t be surprised to see that develop into a fire in later episodes, particularly if she gets caught out after all her sneakiness.

The Lost Lords is an improvement, then. A significant one. But by introducing two new characters, there hasn’t been enough development, despite the fact that we’re approaching the halfway point of the series. And both Gared and Asher’s adventures, particularly the former, are removed from those of the other characters. Asher is at least on a mission for his family, even if it is in a distant land, but Gared’s story is completely seperate now. He’s trying to become a Ranger, which has absolutely nothing to do with the trials and tribulations of the House Forrester. It’s awkward in its difference from the rest of the episode, and it remains to be seen how Telltale will unite the various threads.