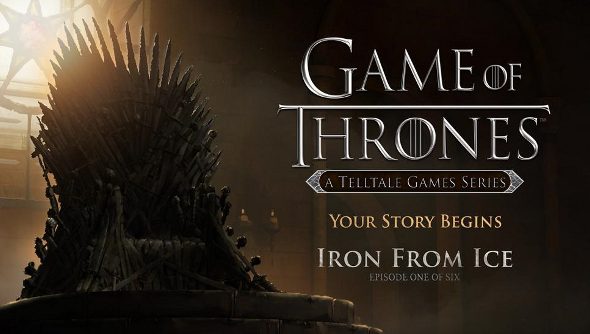 Telltale have been playing it pretty cool in regards to Game of Thrones, which makes the announcement that the first episode (of six) of the series, Iron from Ice is coming soon. “Your story begins,” reads the teaser tweeted by the studio today, suggesting again that the game will see players take on the role of characters not established in the books or TV show.

Previous teases have only hinted at what we can expect from Telltale’s latest TV to game adaptation. The first one, back in August, shone a light on a particular quote from Dance of the Dragons, emphasizing a lesser known house: Forrester.

Similarly, a more recent tweet quoted the book, this time drawing eyes to one word: ironwood, a type of tree found in the North. The title of the first episode and the fact that the first quote was spoken by Asha Greyjoy implies an Iron Islands connection as well. The Ironborn were referenced in the latest tweet as well, along with the grisly House Bolton.

I don’t know about you lovely lot, but I would be very keen to watch horrible things happen to Boltons. But I guess we’ll have to wait until whatever date “soon” is to see if those naughty lovers of flayed men get their comeuppance.