Victoria: An Empire Under the Sun and its sequel Victoria II have always felt like the black sheep of the Paradox family. Despite a dedicated fanbase, Victoria fans have been waiting over seven years for a sequel. Imperator: Rome showed that there is at least some willingness to look back at some of these more niche grand strategy titles, but that game also betrayed perhaps a reluctance to commit any serious resources towards such a project.

This got me thinking, in the absence of the sequel everyone knows we deserve, what other Victorian games can we play whilst we wait?

As I sat down to write this list, it became clear that there is a distinct lack of strategy games set during this period. The era is dominated by action/adventure games and RPGs such as Assassin’s Creed: Syndicate, Red Dead Redemption 2 or This Land is Mine. We managed to find some gems that are worth checking out regardless. It’s worth noting that we haven’t mentioned Victoria II itself- it’s a valid option but if you’re like us, you’ve probably played it a lot already by now.

With the preamble out of the way, let’s see what games there are to scratch that Victoria 3 itch… 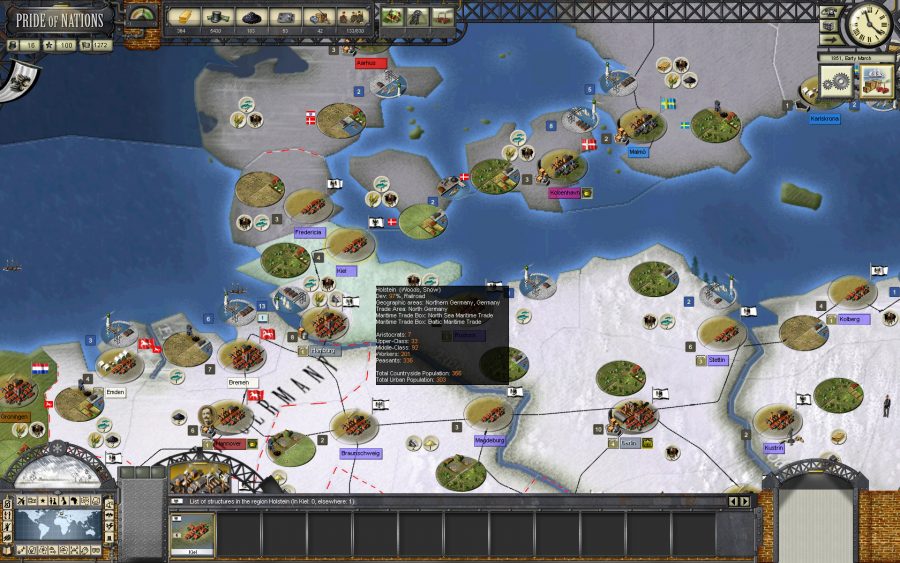 Released in 2011, this game was originally published by Paradox but is now published by Matrix Games/Slitherine after developer AGEOD left the Paradox fold and joined the latter companies. It sits on my personal shortlist of greatest games. It plays like any other AGEOD game in their long line of titles; at least in terms of military mechanics. Pride of Nations goes a step further by expanding its scope over previous titles by adding deep economic, diplomatic, and colonial layers into the game. Despite its age, it remains both original and fun to play. From a card-driven colonial system that is a game within a game, to clever mechanics that seek to differentiate state finances from that of private equity, Pride of Nations is a masterclass in game design.

Related: Check out our list of the best grand strategy games

Unfortunately, the game also stretches the limits of the client it was built on. It takes minutes to process a single turn. This was game-breaking when one turn simulated 15 days and the grand campaign stretched from 1850 to 1920. Turn times have been improved over the years through patching, but remain problematic. Frame rate issues when scrolling around the map also remain. Yet for all its imperfections, this game’s ability to capture the Victorian and the colonial machinations between imperial powers gave it an unmatched charm and historical depth; one surpassing its Paradox rivals.

Imperialism II: The Age of Exploration

Imperialism II was released in 1999 and despite its age, continues to hold up as a solid turn-based strategy game. Whilst Imperialism II technically starts in the 16th century, its endgame is set firmly in the Victorian era of iron and blood. What makes Imperialism so engrossing is the way in which it reduces the economic, diplomatic, and military concepts of the Age of Imperialism into dispassionate realpolitik. In some ways its gameplay cycle is a simplistic social commentary on the history of Europe from the 16th through 19th centuries. You colonise the New World, exploit its resources and develop an economic engine. You then take that wealth and squander it fighting the other major powers with a single-minded end goal: conquer 50% of the Old World.

Yet, despite its single military victory condition, the game is more nuanced than it may seem. This is an engine-building game focused on resource management and logistics more so than military tactics. Without a strong economy you can’t dominate the late military game. 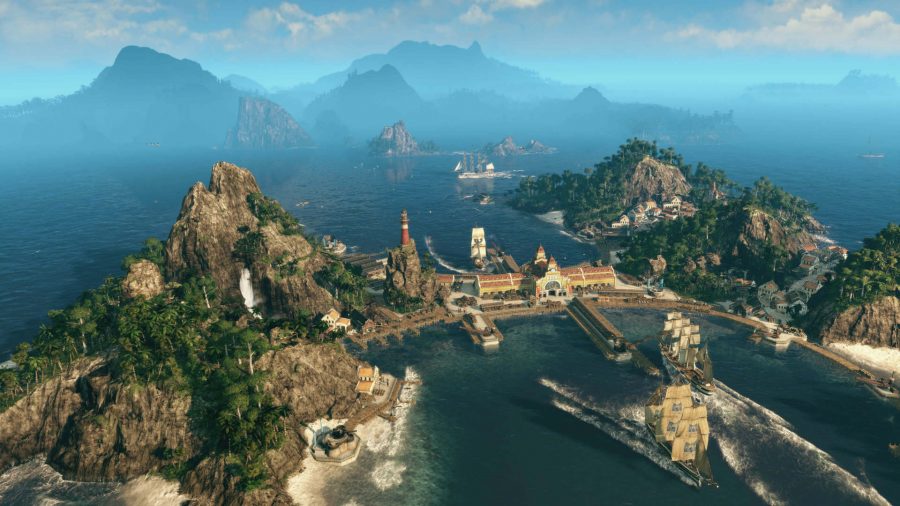 Anno 1800, which is the seventh iteration of the Anno series takes place in the 19th Century, or to be more precise, a pseudo 19th-century. Anno has always abstracted the geographical and political realities of the periods it represents by painting in stereotypical broad strokes rather than historically accurate detail. This is not attempting to portray Victorian geopolitics; maps consist of small islands the likes of which might be found in a Pacific archipelago as opposed to the European continent.

What this game does so well however, is capture the aesthetic of the Industrial Age in a way the other games do not. Zoom in close and you get the feeling you are watching a bustling Victorian diorama. The gas street lamps, the Parisian terraced housing, the smokestacks and revolutionary mobs; these small details draw you into the spirit of the age.

If you have played an Anno game, you know what to expect. This is a city builder layered on a resource management game. It’s about production lines, trade routes, and city planning. But Anno games are more than just a pretty face. The series has always had a compelling gameplay loop and Anno 1800 is no different. 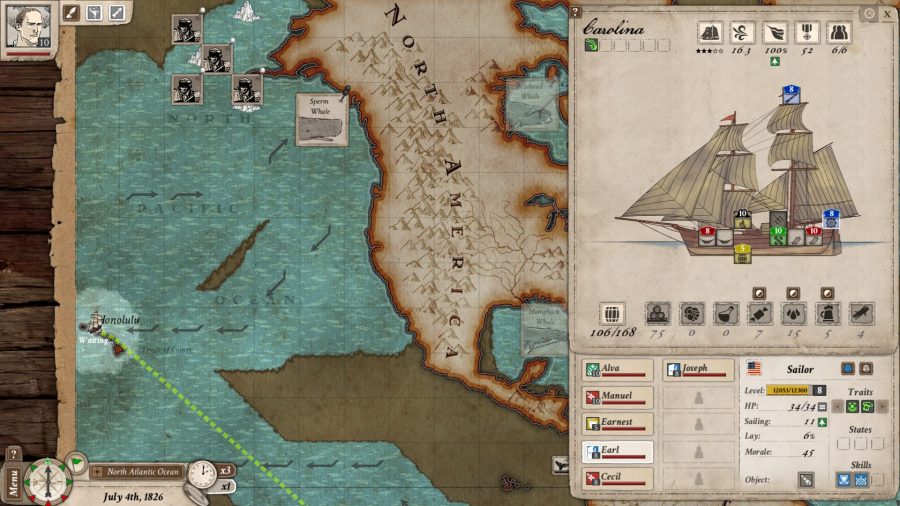 Nantucket is a whaling sim set in the 19th century. Its story begins a few years after Herman Melville’s literary classic Moby Dick. You assume the role of the sole survivor of the Pequod, go about whaling for profit, and maybe even continue the hunt for the infamous White Whale. The game incorporates elements of strategy, tycoon, adventure and role-playing games. The mechanics are engaging, if unoriginal. But the game’s main appeal is its unusual theme.

Its stylised art draws you in, making Nantucket feel like a period piece; one that immerses you in its subject matter. If Victoria and Pride of Nations represent a top-down approach to experiencing a time period, then Nantucket is a bottom-up approach; a grassroots experience of the bloody, Victorian Yankee whaler. It’s a unique game about a unique topic and something a bit different from other titles on the list. 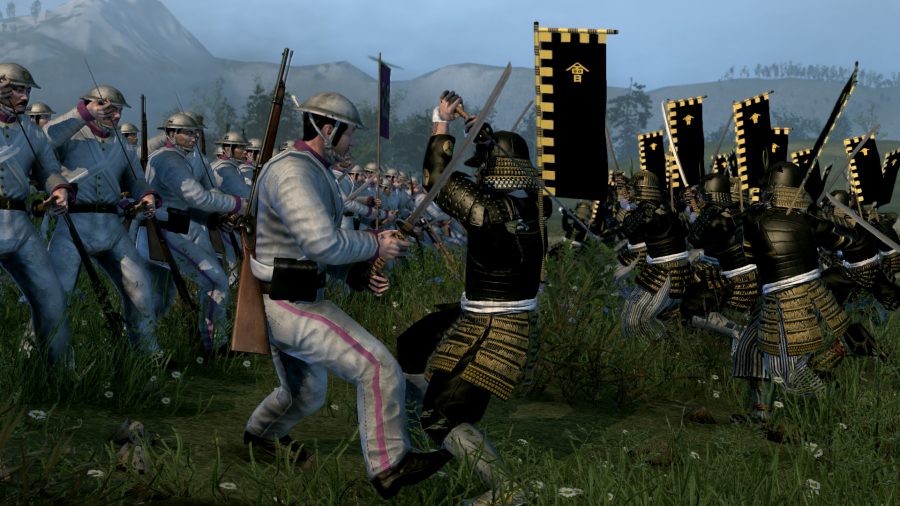 The artist formally known as Total War: Shogun 2 – Fall of the Samurai is a standalone expansion within the venerable Total War series. Originally released to mark the end of Total War: Shogun 2’s premium DLC support, it was re-branded in 2019 as a Total War Saga game and removed to its own personal ecosystem. Confused? So were many Total War fans. Still, it was an excellent send-off to one of Creative Assembly’s best releases.

Fall of the Samurai covers the 1868 Boshin War in Japan. You play as one of the larger clans from the period and either support the Shogunate and its western-backed modernisation efforts or stay true to the traditions of the Samurai and support the Emperor. If you’ve seen the Tom Cruise film The Last Samurai, it’s set during the same events (more or less).

Related: Check out our list of the best Total War games

Shogun 2 is narrow in its geographical scope compared to some of the other games on this list. However, it does a good job of representing (in semi-historical fashion) the social upheaval that came with industrialisation, society’s transition into modernity, and the passing of the old ways. 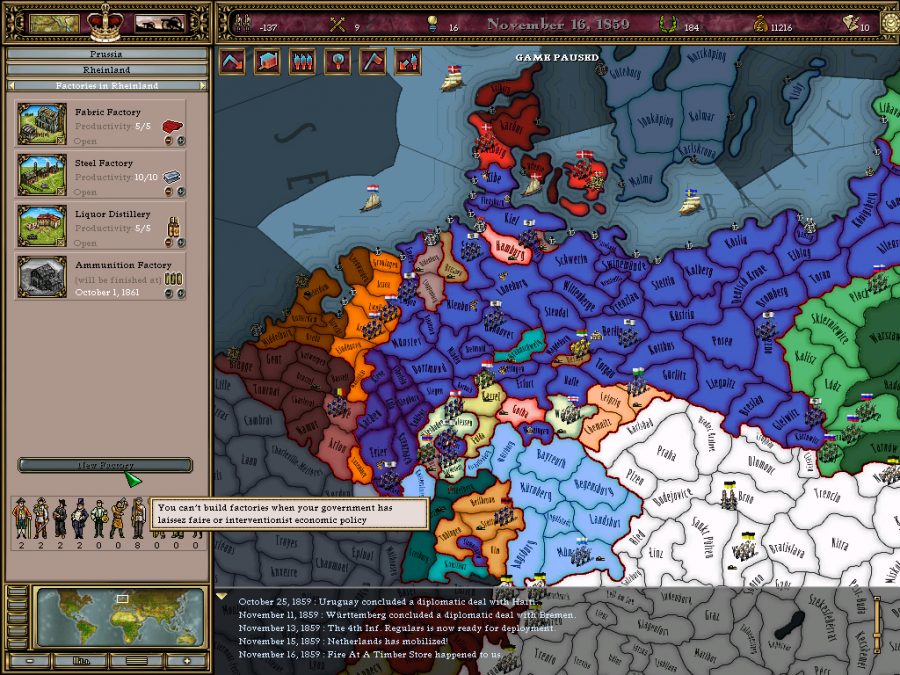 Okay, I will level with you. I was never a big fan of Victoria II. I think it’s a generational thing; I didn’t like Europa Universalis III or Hearts of Iron III either. During this era, Paradox was moving away from the historical events system it utilised in earlier titles and replacing them with the sandbox systems we have today.

As someone who loved the old event system, I absolutely adored Victoria: An Empire under the Sun when paired with the Victoria Improvement Project mod. This overhaul tweaked the AI, added economy changes, new nations and most importantly, a host of new historical events. The VIP mod added events large and small. Everything from the publication of a seminal literary work through to complex event chains leading to wars and the formation of nations. Each country had its own unique set of problems to overcome and the events system gave the game a branching narrative that is missing from the more modern iterations of Paradox titles. Playing Victoria with the VIP mod makes the player feel like they are actively influencing the unfolding of history, one event at a time. So why not return to where it all began?

The mod is still available from the Paradox forums (version 0.4 Hotfix 1) and requires the Victoria Revolutions expansion patched to version 2.01.

So, there you go. A list of games to try out whilst we all wait for that mythical Victoria III announcement.

Leon live in Australia, and likes to the pass the time playing super in-depth games ranging from Paradox grand strategy, to economic sims like Anno.