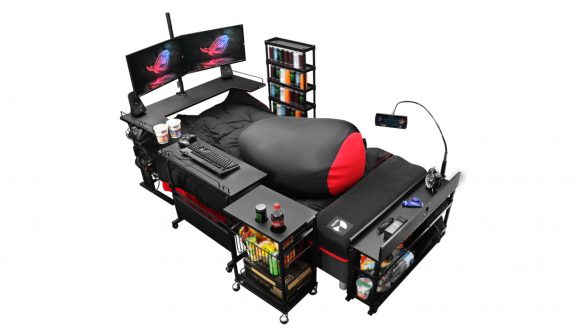 Pictures of a gaming bed coming out of Japan got a lot of social media attention over the weekend, with TheGunrun’s “Japan has made a gaming bed” tweet gaining over 49,000 likes and 12,000 retweets. The images of Bauhutte’s ‘gaming bed’ might seem like the wet dream of those real-life South Park ‘Cartmans’ of the world who don’t even leave their gaming chair to go to the bathroom, but it’s not really a ‘gaming bed,’ is it?

As Reddit user Things_with_Stuff points out: “That’s just a regular bed… With shelves around it.” Even though Bauhutte’s application of the concept isn’t very practical (who’s going to enjoy rotating their torso 90 degrees every time they want to type?) the concept is pretty cool regardless, and with some dedicated work it could have some genuine practical use – for those with disabilities that make it difficult to get out of bed, for instance.

Speaking of concepts, while the ‘gaming bed’ might be a little silly – though not quite “immersive gamer’s cave” Acer Predator Thronos level of silly – some of Bauhutte’s other concepts have more to be said for them. Bauhutte specialises in making what might be described as ‘PC gaming’ furniture: chairs, desks and around-desk accessories.

It also sells a ‘cosplay suitcase.’ Yes, a suitcase specifically made for cosplayers… don’t worry, I don’t get it either.

On its ‘concept desk’ page, it has some interesting (you guessed it) concepts for gaming desks, which give you ideas for how to use its various furniture models. There are some concepts that do, regrettably, pique my interest. ‘Regrettably’ because they bring forth that mild embarrassment that results from being reminded of my degenerate World of Warcraft days, once upon a time. 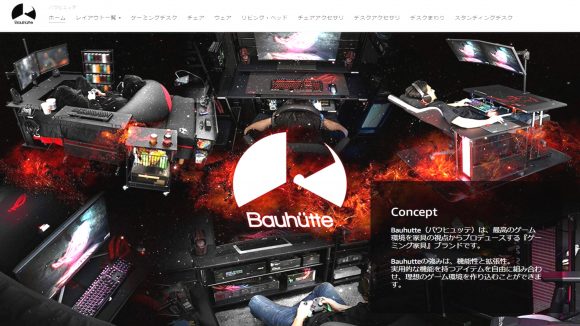 Take its ‘game system while sleeping’ concept, for instance, which features a long monitor arm and reclining gaming chair, meaning you can lie back and look up at the screen. This is definitely something I would’ve made sordid use of back in the day, when I used to be awoken by Stormwind’s triumphant music after a late-night session accidentally turning into a full night’s sleep.

And there are some concepts that don’t make me feel quite so ashamed, too. Take its ‘dual gaming desk’ setup, for instance. This concept features two gaming setups in an L-shape, with the dual tower sitting where the two setups meet. This is actually something I’ve wanted for a long while, as it provides a comfortable layout for one PC for gaming and leisure, and another purely dedicated to working. This creates that much-needed psychological separation between workspace and leisure space, without the need for entirely separate areas.

Its ‘cycling gaming’ concept is worth an honourable mention, too, if only because it’s the healthiest one on the list. But all it is, really, is a stationary cycler attached to a small desk, better-fitted to a laptop than a full desktop setup. I’m not going to pretend I’d rather cycle while gaming than cycle before gaming, but for those health buffs who are pushed for time, this one might come in useful… maybe.

So, Bauhutte has a range of ideas for how you can use its gaming PC furniture, and not all of them are terrible. In spite of its ridiculous ‘gaming bed’ concept, some of its other concepts seem pretty useful, and even (dare I say it?) healthy.