I can’t make up my mind about this. Is the new InWin Alice PC case cool? I mean, the product page says it’s cool, but I just don’t know. Should you wrap a PC in fabric? The concept case design was first shown off at Computex this year, but Jacob didn’t see it while he was there because it looks like some sort of hipster bin for reusable nappies, and he’s blind to such things.

At the time it was just a concept case, and not necessarily something the company was actually going to start putting on the shelves of your local etailer, but now InWin has gone in on the Alice design and is launching the case.

It’s not just the fabric wrapping that’s unique to the InWin Alice family, the whole design is very much unlike your traditional PC chassis. For a start its frame is built from plastic, it comes apart almost completely, and is designed to suck air in from the base and out through the roof vents.

InWin has prior form for turning fantastic concept designs into a reality. A few Computex shows ago it had the wonderful WinBot chassis around the show, and on stage with Intel, wowing the crowds. Like the Alice, the WinBot has now found a commercial home.

The frame of the InWin Alice (via Sweclockers) is built entirely from ABS plastic, making a stark difference from the traditional heavy steel or aluminium construction of most PC chassis, and that means the weight is drastically reduced. The Alice weighs in at only 5kg, that’s half the weight of some competing mid-tower cases. 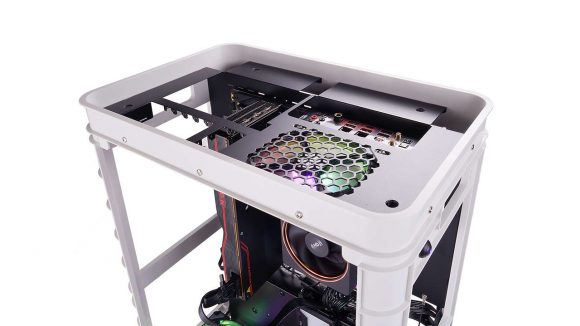 The orientation is very different too. There aren’t a huge number of PC cases that mount their components vertically, with the back panel on the roof of the machine, with the vents facing upwards. Fewer still that then entirely block off easy access to the back panel by putting a lid on things, but that’s the way the Alice and its cooling system works. 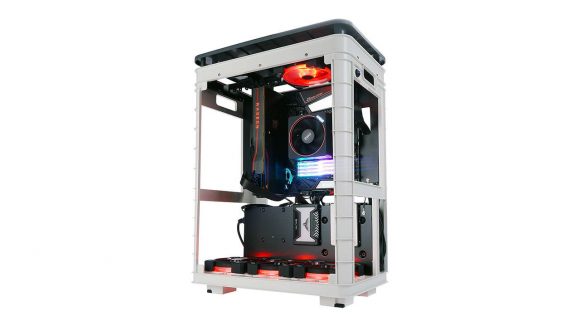 The base design is to have fans on the base pulling air in and then the exhausts around the CPU and the rear of the GPU firing upwards into the lid and then pushing the air out around all sides of it.

And then there are those fabric wraps. I can see how it might be more resistant to dust build up essentially having vents around the entirety of your machine, but there’s something rather impermanent about having a flimsy bit of coloured cloth between you and your expensive components. 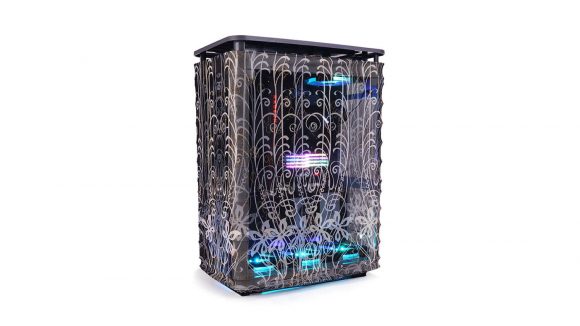 That said, with a host of LEDs blazing away inside your machine I’m sure the glow through your chosen fabric would look amazing…

As yet we don’t know when the chassis will be available, how much they will cost, or what territories will be lucky enough to have access, but we’re very much intrigued to see what it looks like in the flesh… er… fabric.