MadCatz is launching a new mouse to take on Logitech’s PowerPlay wireless charging: the MadCatz R.A.T AIR. This flagship wireless mouse will utilise electrical capacitor technology within its included “Activation Board” mouse mat to continually power the rodent during use, and ensure you never run out of power mid-game.

The Air wireless mouse weighs 100 grams, no doubt aided by its lack of onboard batteries. That’s still a little shy of some of the lightest, battery-powered wireless mice out there. However, instead of charging up, this mouse will only function when on the included board – although MadCatz also tout the mouse’s ability to continue to operate during very brief stints away from the mat. If in doubt, both the mat and mouse feature USB connectivity for extra flexibility while gaming.

Aside from wireless connectivity, the Air also features up to 12,000 DPI from its Pixart PMW3360 sensor – because reasons – and the usual suite of OMROM switches for lengthy reliability. You can also expect the usual MadCatz customisation from its tweakable design, which is common across most of the R.A.T range.

Logitech championed wireless mat charging with its PowerPlay products back in 2017, and has since incorporated the system into many of its popular mice – such as the Logitech G Pro Wireless and Logitech G502. 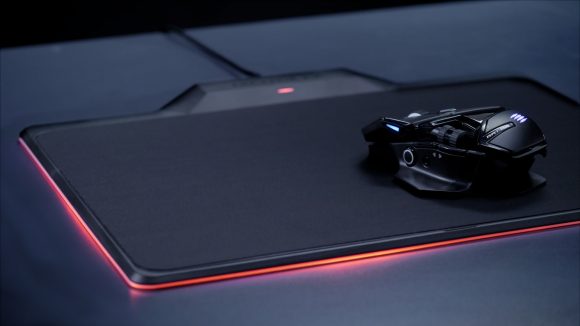 MadCatz, on the other hand, was going through liquidation in 2017, and only returned under new ownership in 2018. Since then we’ve seen it return with many of the products it’s well-known for, but it’s promising to see the company branch out into new and updated designs.

MadCatz is touting the R.A.T Air for European release. It’s currently available on Amazon UK for £200, which puts it roughly in line with the comparable mat and mouse combo from Logitech.