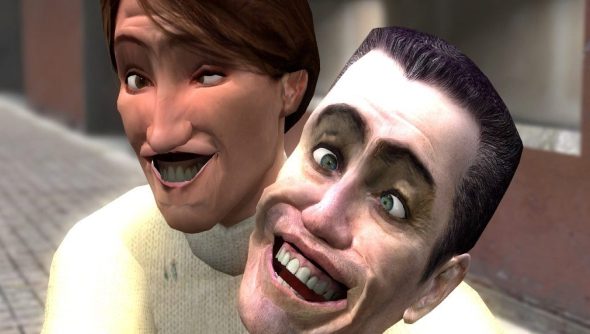 Garry’s Mod is recognisable as the daring, frankly filthy sandbox game that rose out of the the early Half-Life 2 modding scene. It was one of the first to arrive, and it ended up on Steam as a full-game. When I chatted to Garry today, he confessed that he first refused Valve’s offer to turn it into full game, and that his best-selling game is stuck with a name he really, really wants to change.

It started in 2006, about two years after Garry’s Mod became the go to game for people looking to make Alyx and the G-Man make sweet sweet love. Valve e-mailed Garry:

‘What was happening, I think, is Steam was just taking off, and they wanted to see something else on it. They only had HL2 and Rag-Doll Kung Fu and they just wanted to encourage it a little bit

‘I was talking to them about something else and they said: “You should think about selling Garry’s Mod”. And I said: “Yeah, right! Who’s going to buy that?” So I basically said “no”, then about a month later they e-mailed and said: “You should really think about selling Garry’s Mod”. And I was all like: “yeah, I should. I’ve got nothing else going on. I might as well sell it.”‘

He imagined it would be the first in a wave of mods going pro on Steam, and while a limited number did, his remains the most obvious and popular example of a mod turned into a full title. It even has ‘mod’ in the title, much to his chagrin: “That’s one of my big regrets. If I could rename it I would. I’d call it: “Sandbox”. I’d have to change it too many times on the webpages, though. All that finding and replacing…”

We’ll have more from Garry as fast as we can transcribe the interview.