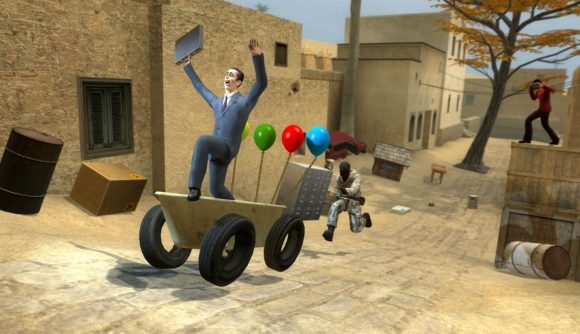 March 30, 2020 Facepunch Studios has confirmed the game being referenced is Sandbox.

It looks like Garry’s Mod 2 is in the works – sort of. The creator of the original Garry’s Mod – or GMod, for short – has teased that he’s “making GMod 2” on Twitter via a meme (that familiar Distracted Boyfriend one), but it seems the game he’s referencing is Sandbox.

Garry Newman’s post on Twitter seems to tease he’s “making GMod 2”, as you can see below, though it’s not exactly confirmed at this stage. In a follow-up tweet the dev, who is based at Rust studio Facepunch in the UK, jokes: “Holy s***, thanks for the support, hope you’re not gonna be disappointed when you find out that GMod2 is an iOS match 3 game made in unity.” It’s not clear what form GMod 2 might take just yet, but we’re pretty sure it’s not that.

However, we reached out to Facepunch and it seems the game being referenced in the tweets is actually Sandbox (or S&box), a new Unreal Engine tool the studio has been working on for several years. “Our intention with Sandbox is to take a powerful game engine (UE4 right now) and build a hotloading C# layer on top of it,” the site’s description of Sandbox reads.

The sandbox game’s fans have been more than a little excited by the teaser, judging by comments on Twitter so far. As of this story, there are just under 8,000 retweets, 55,000 likes, and nearly 1,000 comments to the creator’s first post, which are mostly excited memes and variations of ‘YES!’

Holy shit, thanks for the support, hope you're not gonna be disappointed when you find out that gmod2 is an iOS match 3 game made in unity

It’s still not clear yet how far along Sandbox is into development, what form it’ll take exactly, or when we can expect it to arrive. In the meantime, check out our list of upcoming PC games to keep an eye out for.