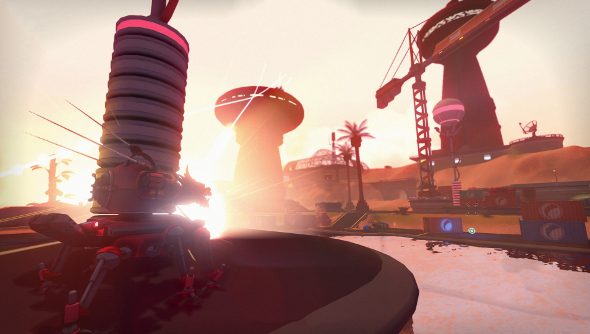 I have been building robots and tanks! Oh, yes. Tanks with shark guns. Mechanical spiders with alien brains. Invisible cardboard boxes balanced precariously on balls of goo. I am not, as you might assume, attempting to take over the world like a cartoon supervillain, though. I’ve been playing a spot of Gear Up.

Developer Doctor Entertainment shot us us email today telling us to ask ourselves “do I prefer the cold steel of the minigun or the heartwarming sensation of the flamethrower? Should I swoop across the arena with wind turbines or let loose the smell of burning rubber with go-kart tires?” I didn’t know how how to answer. Then I decided I prefered sharks that shoot harpoons out of their gaping maws.

So I made a thing that does just that. Here it is, in all its glory: 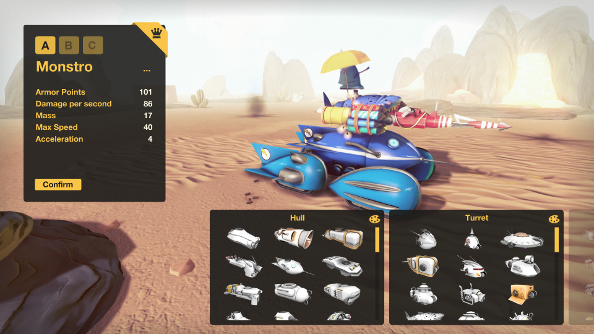 I stuck fireworks on the side because why the hell not. It turns out that fireworks are very good at blowing things up. Perhaps even better than harpoons.

And all of the different components I slapped on my death machine actually had quite the impact, more than just letting me blow stuff up. For instance, adding mechanical legs onto my vehicle let me do this: 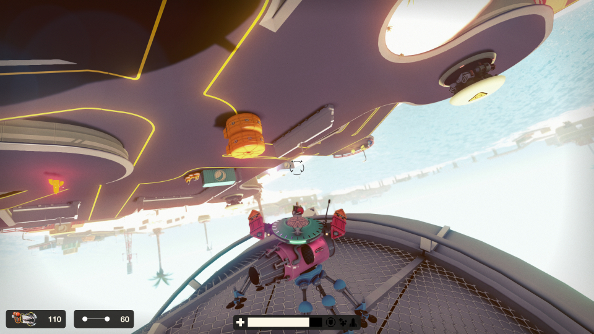 Unfortunately, I foolishly equipped it with a flamethrower, and so could do little but watch as my enemies scurried below me. I felt a bit silly, hiding up there, upside down, on a giant satellite dish. But not nearly as silly as when I rolled around on this: 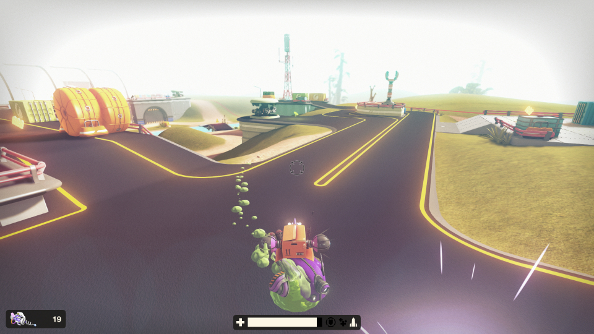 Yes, that’s a trail of goo I’m leaving behind me. And my turret is made of cardboard. And since we all know that cardboard boxes are the masters of stealth, I augmented my vehicle with some stealth gizmos too.

Then I had to stop, because the bloom was giving me a slight headache. It’s very, very bright. So much so that it’s quite hard to see enemies from a distance. There are some night maps, though. Maybe I’d be better off playing on them.

Anyway, a good time was had making bizarre contraptions before that point.

Despite its beta status, there are already an impressive number of permutations. Add some spider legs to a slow, bulky tank, and it’s suddenly able to climb up walls and shoot things while upside down. Rocket boosters can be added so that the vehicles can jump. Weak, light hulls can be swapped out for tough, heavy things that make your tank a lumbering behemoth, but more defensive.

Every vehicle is made up from the same number of components: the hull, turret, gun, propulsion, support and decorative accessories. And within each section is a dozen or more options, all with different stats or unique abilities. Hovering UFOs with tesla cannons fight vintage rockets with guns shaped like dragons – it’s absolutely bizarre.

It just hit beta today, so why don’t you go and take a look.