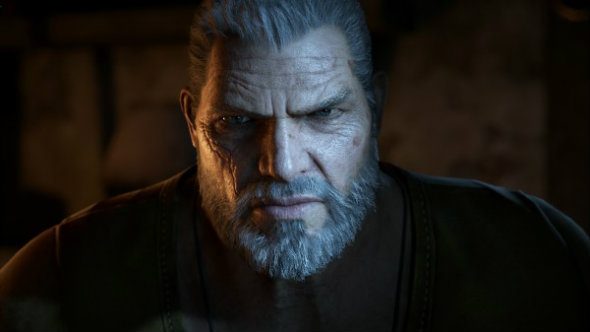 A new gameplay video has been released for Gears of War 4 and it’s pretty spoilerific, so maybe stop reading now if you’re the kind of person who cares about that.

Actually, why don’t you read our best games of 2016 feature instead.

The video shows Marcus Fenix leading his son and squad through a village that could well be his hometown, judging by the vocal exchanges. It’s a bit more on fire these days, but I’m sure it was lovely at one point.

What’s most interesting about the gameplay video is the new enemy type, which appears to be cybernetic. Maybe the humans tried to create a robotic force to fight against the locust, but they turned bad, as robots do in all fiction.

It could add a new dynamic to the action, but the way they eat bullets is kinda underwhelming. It doesn’t have the satisfying crunch of Binary Domain’s robot shattering – these just kind of soak up the bullets and then shatter into debris as they die, rather than bits of metal satisfyingly splintering off with each impact. Shame.

Here’s the video, courtesy of IGN: