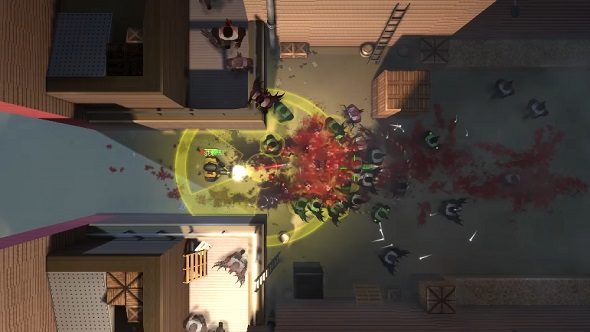 For more multiplayer chaos, have a gander at our list of the PC’s best multiplayer games.

Bringing together the top down shooting and driving of the original Grand Theft Autos with the character skills of a MOBA like League of Legends, Geneshift tasks players as soldiers attempting to quell a mysterious outbreak. While there is both a single player and co-op campaign, the main draw of Geneshift is its 8v8 multiplayer mode.

With tons of vehicles to drive, players can join together with others to create heavily armed truck convoys, or stick to hit and run attacks in speedy sports cars. So far, Nik Nak Studios have announced multiplayer modes like checkpoint races, capture the flag and zombie survival, with more creative modes to be announced during its Early Access period.

Players can permanently level up their mutant soldiers, gaining new skills and abilities to destroy their opponents. The weapons range from your standard assault rifles and snipers, to rapid fire rocket launchers and flamethrowers. Special chemical vials can also bestow short term powers like teleportation and invisibility, allowing players to sneak into enemy strongholds and then escape as quick as a flash. When combined with projectile reflecting force fields and heat seeking plasma balls, Geneshift can become incredibly chaotic with a contingent of 16 players.

Geneshift players can also create their own maps, with creators gaining unique cosmetic awards based on how many times their map has been played. There is a competitive matchmaking system which attempts to match equally skilled mutants together, so the pandemonium shouldn’t be too one-sided.