Genesis began as nearly all of Steam’s survival stories do: with a man building furniture by himself. Except that Portuguese lead artist Andre Pires found himself not on a desert island but in Mexico, and not wielding a makeshift axe but the toolset of oddball crossover MMO Second Life. He’s been selling virtual goods to its denizens and living off the proceeds for seven years.

Like your adventures to be self-directed? Try one of the best sandbox games on PC.

“I sell some shoes and apparel for the avatar, stuff like that, but mainly 3D furniture and animations,” says Pires. “It’s a huge industry. At a certain point there was seven million users.”

Second Life is famed for its marriages but Pires found a business partner, striking up a friendship with fellow 3D artist and Dallas resident Walker Twyman. Undeterred by the oceans between them and propelled by funds from his Second Life success, Pires travelled to the US and the two conceived Genesis under the guise of Blindshot Interactive.

“The genre was exploding at that moment,” recalls Pires. “There was Rust and The Forest, 7 Days to Die, DayZ, all those. They were really strong at that time – those games influenced us.”

In the time since, the field has become ever more saturated as copycat developers have taken up their own axes and erected Early Access survival efforts on Steam. The sci-fi ground that seemed so fertile when Blindshot began just a year ago has since been well-colonised – but Pires reckons the pair still have a unique angle.

“No matter how far in the future we are, if you pick one human up and drop him in a forest on a planet somewhere, with very little preparation and nothing on him, he’s going to be in a primitive situation,” he says. “Nature itself is relentless. You don’t need monsters or robots or aliens to kill you.”

Even now, Pires says he plays every survival game that comes to Steam. He believes he’s identified what works best in each: the crafting system of 7 Days; The Forest’s trees and traps; the fear triggered by nearby footsteps in Rust before its engine reboot. 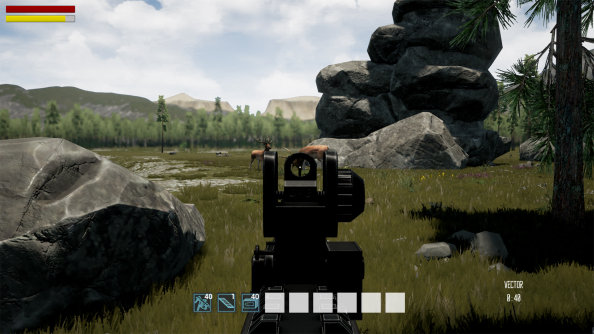 But Genesis is distinguished by what it has in common with Minecraft – a game often left out of survival discussions. Rather than simply taking from their new world – which Pires says is four times bigger than legacy Rust’s – players will be building atop of it too. Beyond the instinct to stay alive, Blindshot are keen to give players something to live for.

“I believe it could be the way to go because a lot of the genre is focussed on multiplayer and on the fight itself, on being fast-paced,” suggests Pires. “Most of them are very shallow.”

The plan is to take players through an accelerated tech curve – from primitive, to contemporary, to futuristic – and allow them to build several types of structure equivalent to those stages.

“We thought of many ways to achieve that and we’re still trying to fine tune it,” says Pires. 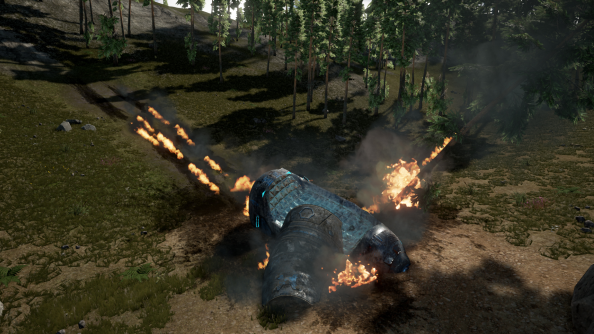 Blindshot want their players to have the ability to tame animals, by trap or by tranquiliser, and have them reproduce for resources. In Genesis, animals can become a commodity, worth protecting from wilder creatures and – in optional multiplayer – other players.

“These are proven ideas,” notes Pires. “We’ve done these systems before for Second Life, where there is a big community of breedable animals, so we know what people enjoy. It’s a million dollar industry – they treat them as pets.”

Blindshot imagine their mechanics inspiring farming communities – friends hiding out in the mountains away from the aggressive solo play more readily associated with the survival genre. That said, domesticity shouldn’t be mistaken for tranquility. Genesis will go further even than Rust, which leaves unprotected player avatars open to predatory attacks when their owners log off. 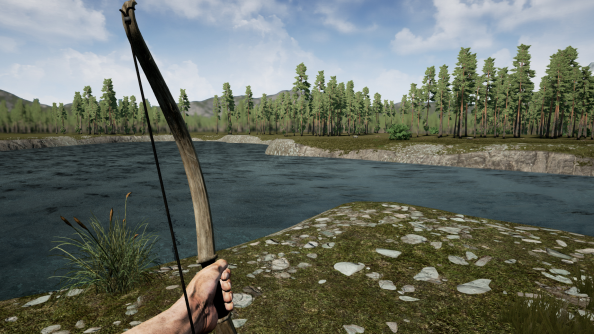 “It was very exciting to go the first night,” remembers Pires of early Rust. “You had nothing, you had to find a spot for your campfire to eat something and create your sleeping bag. That moment of having things to do and accomplishing them was great. [But] once you had your four walls and one metal door that’s it, you’re ok. Our structures are going to be destructible. If you have a hatchet and there’s a wooden wall, you can smash it down.”

Moreover, Blindshot plan to underlay their map with natural cave systems that form complex, connected pathways for players to traverse. Attack routes via which they might, potentially, upend lovely farming communities. 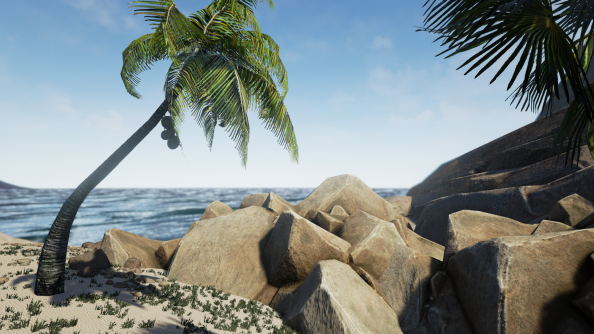 There’s no permanent escape from wrathful nature, then. The unforgiving habitat Pires is shooting for sounds like nothing else in survival games: animal AI that will see rabbits dashing for holes and lone wolves alerting their packs to danger; natural disasters that might find a base raiding party forced to turn and face the threat of an avalanche instead. It also sounds wildly ambitious. Something to hash out with a nascent audience on a Steam Early Access community page while the kernel of a game called Genesis develops.

“Obviously it’s easier said than done,” says Pires. “But we will get there as long as gameplay stays stable and gives us what we want.”

You can find Genesis on Indiegogo. Unreal Engine 4 development is now free.

In this sponsored series, we’re looking at how game developers are taking advantage of Unreal Engine 4 to create a new generation of PC games. With thanks to Epic Games and Blindshot Interactive.