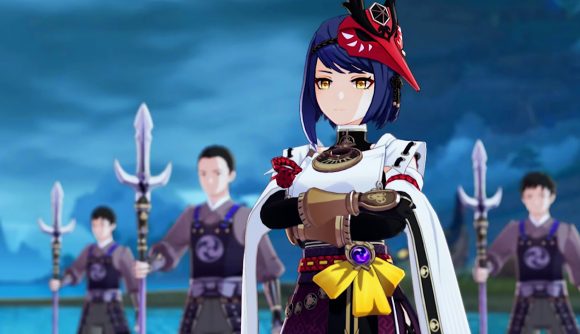 The Genshin Impact 2.1 release date is just a couple days away now, which means we’ve got lots to get excited for in the way of new content coming to MiHoYo’s anime game imminently. The Inazuma Archon Quest’s final act, some more boss enemies, two new five-star weapons, and three new characters are on the way with the patch – and now we’ve got an idea of when it’ll be dropping. Some spoilers ahead, folks.

MiHoYo is kicking off maintenance on Genshin Impact’s 2.1 update at the usual time of 6am UTC+8 on September 1, the studio’s just announced on the game’s site, which translates to 3pm PST / 6pm EST / 11pm BST on August 31. This is estimated to take around five hours, and as compensation for the servers being down for a time, MiHoYo is once again giving players some freebies – 300 primogems, to be exact. That’s 60 for every hour the game’s offline for 2.1’s upload, though you’ll still get the full amount even if the update drops earlier than expected.

Some of the big news for the 2.1 update includes the new characters coming: Raiden Shogun and Kujou Sara, who arrive alongside the 2.1 update on September 1 with its first banner, while Kokomi will debut with the second.

The new locations coming with 2.1 include two new Inazuman islands called Watatsumi Island and Seirai Island, while the new bosses headed Genshin’s way (Spoiler alert ahead so scroll on if you don’t want to know) include two new overworld bosses – Thunder Manifestation and Hydro Hypostasis – as well as Trounce Domain Boss Signora.

Our developers will soon begin performing update maintenance. After this is complete, the game will update to a new version.

Then there are of course some new events and other features coming, like fishing. For the full rundown check out everything we know so far about Genshin Impact update 2.1 at that link, and get ready for the new batch o’ content. For now, check out our guides on the best Genshin Impact Baal build and best Genshin Impact Sara build for some handy tips ahead of their imminent arrival.