Want to know how to solve the Araumi puzzles in Genshin Impact? The Genshin Impact community has been stumped by the Sacrificial Offering quest in Inazuma which takes players on a journey through the region. After completing ‘A Strange Story in Konda’, you should unlock the Mementos Lens. Without this item, you can’t access the Araumi ruins where the puzzles are located.

The Genshin Impact 2.0 update introduced Inazuma, the Japanese-inspired region that is ruled by Baal, the Electro Archon. The main quest line focuses on the Raiden Shogun and Kujou Sara’s Vision Hunt as they hunt down anyone who has received the power of the Gods. The new Genshin Impact characters such as Yoimiya, Sayu, and Ayaka are not only playable characters, they’re also pivotal in helping to dethrone Baal as Inazuma’s leader.

Make sure you have an Electro character in your party as you need one to be able to complete the Araumi puzzles. This is a great opportunity to try out the Electro Traveler which can be accessed for free by interacting with the Statue of the Seven on Inazuma. If this quest was bugged for you at launch, it’s worth trying again as there was a hotfix that specifically addressed this puzzle.

It’s important to note that with all of these puzzles, they can be reset to their original state by logging out. Sign back into the game and it should revert back to its default form.

Once all four statues are switched on, head into the large well and look at the three kitsune statues using the Mementos Lens to reveal some plates. Activate the plates on the wall to gain access to the Araumi Ruins. 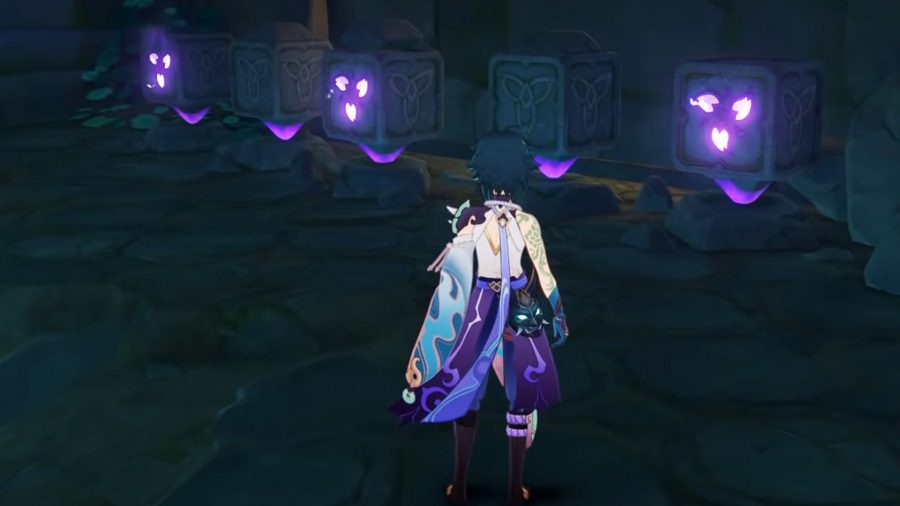 The second puzzle is next to a hole in the ground with water underneath. There’s a raised platform nearby which gives you a great overhead view of the blocks – three of the blocks feature glowing purple leaves on them in a diagonal pattern. With this view of the puzzle in mind, hit the bottom left block twice, then hit the top right block twice. This drains the water in the hole and unlocks a precious chest right away.

The final puzzle is located in the waterlogged area that you just gained access to. Keep swimming until you find a staircase. Head to the top of the stairs and look behind you to discover the last puzzle. The blocks should be in a straight line with three glowing purple leaves on blocks one, three, and five. All you need to do is hit the middle block twice to make the precious chest appear.

And that’s all you need to solve the Araumi puzzles in Genshin Impact. With the water drained, you can swim through the next area to unlock the Perpetual Mechanical Array boss. Defeating this large Pyro machine drops Ayaka’s leveling materials, which you need in addition to sakura blooms to make her incredibly powerful. Check out our Genshin Impact tier list to see where Ayaka ended up landing.