Looking for the best Genshin Impact Ayaka build? Kamisato Ayaka became available as of the Genshin Impact 2.0 update. Ayaka was initially playable in the game’s closed beta back in July 2019. In just short of the game’s one year anniversary, Ayaka is finally a playable character.

Ayaka hails from the Inazuma region, along with Kazuha, Yoimiya, and Sayu. She is the daughter of the Yashiro Commission’s Kamisato Clan, one of the most powerful families in Inazuma. A lot of Ayaka’s abilities are named after her clan – these abilities aren’t exclusively physical attacks, suggesting the Kamisato bloodline is tied to Cryo elemental magic.

The best Ayaka DPS build is:

Ayaka’s abilities make it clear she was designed to be a main DPS character. The Mistsplitter Reforged is the go-to weapon for Ayaka as it suits her perfectly. You could opt for the Blackcliff Longsword if you can’t afford the five star option as this is easily Ayaka’s best free-to-play weapon. 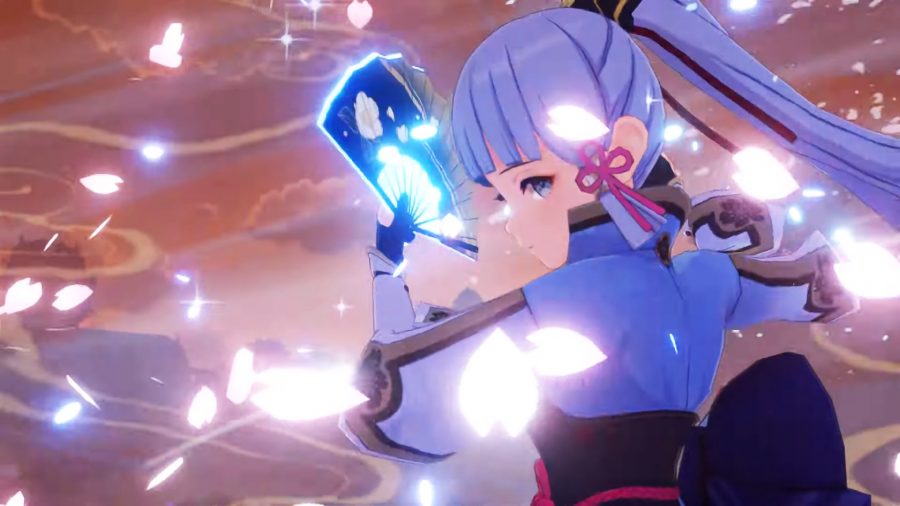 The Mistsplitter Reforged automatically provides a 12% elemental damage bonus, and it activates the Mistsplitter’s Emblem after Ayaka lands a normal attack. This ability has three levels, dealing 8%, 16%, and 28% elemental damage bonus depending on which attacks Ayaka uses and how much energy she has left. Ayaka can easily trigger each of the three levels without having to adjust her playstyle purely for the sword’s abilities.

Unless a new artifact set is released in the near future, the four piece Blizzard Strayer set will continue to be the easy choice for Cryo characters. Using this set, Cryo attacks deal 15% more damage, and Ayaka’s crit rate increases to 40% if her opponent is frozen. To trigger the freeze elemental reaction, your party needs to have a Hydro character. Xingqiu is the best option as he can easily apply Hydro with his abilities, and he can deal large amounts of damage without needing to be on the field.

Ayaka’s elemental abilities have high energy costs – you need to include a support character on your team that can quickly build energy. We recommend picking someone like Diona or Venti as these characters synergise well with Cryo characters, and they’re great at recharging energy. Venti in particular might be Ayaka’s best partner as his elemental skill launches enemies into the air, giving Ayaka a great opportunity to deal damage.

Finally, in order to maximise Ayaka’s powerful elemental burst, don’t forget to include a Cryo support character on your team. Rosaria is a great battery option and she can help increase Ayaka’s crit rate even further with her Shadow Samaritan passive talent. Another powerful support option is Ganyu as she can keep enemies grouped together using her abilities.

There you have it, the best Ayaka build in Genshin Impact. Are you looking for an Electro character but you don’t want to spend any wishes? You may wish to check out the best Electro Traveler build to see what you need to do in Inazuma to unlock the Traveler’s new element. Speaking of wishes, don’t forget to redeem the latest Genshin Impact codes to earn free primogems. You can also check out everything we know about Genshin Impact 2.2 update, and the Genshin Impact Aloy release date.