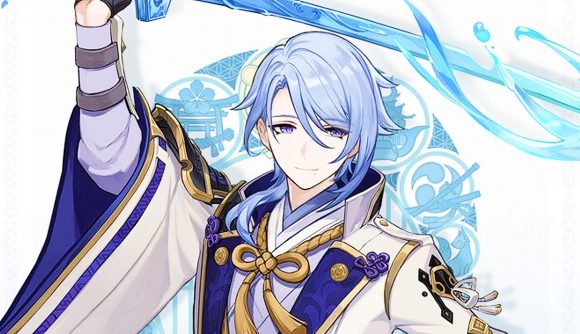 Mihoyo has revealed another new character for Genshin Impact. This one is called Kamisato Ayato, and he’s a hydro sword user who serves as the Head of the Kamisato Clan.

“As the head of the Yashiro Commission, Kamisato Ayato is committed to maintaining the prosperity and stability of the region,” Mihoyo says. We also get a comment from Thoma to flesh his personality out further. While the “game of politics is fraught with peril”, Ayato apparently takes little joy in it all, as he merely sees it as a matter of duty.

Like a lot of Genshin Impact characters, there are traces of Ayato in the anime game already. He was teased in a trailer focused on big Oni lad called Arataki Itto, and he’s also the sibling of Ayaka, who comments on how busy he is in-game following the passing of their parents. “As the head of the Kamisato Clan, brother always has a full schedule of places he needs to be,” she says. “I do try my best to share his load, but there is no changing the pressure he is subjected to all year round, and the toll it takes upon him. If you see him, remind him to take care of himself, for his sister’s sake.”

As the head of the Yashiro Commission, Kamisato Ayato is committed to maintaining the prosperity and stability of the region.#GenshinImpact pic.twitter.com/wLAjVgfhdJ

While we don’t know the Genshin Impact Ayato release date, it’s looking likely it could be update 2.6. Ayato has been revealed before the RPG’s 2.5 patch, so the timing checks out when compared to previous releases.

The Genshin Impact 2.5 livestream is set to start later today. While he may feature in a tease, we expect new character Yae Miko to take the spotlight. For more information on how to watch the stream, you can follow the link.