Looking for a Genshin Impact Barbara hangout walkthrough? Hangout events were introduced in the 1.4 update, and they’re a great opportunity to get to know some of the best Genshin Impact characters a little better, particularly those four-star characters who don’t have their own story quests.

Aside from the five possible endings, it’s possible to completely fail Barbara’s hangout event by choosing options that are so disastrously wrong that she immediately runs away. She’s also got a heartbeat meter – if you trip up a little, you will lose a heart; lose too many and she’ll ditch you. Not to worry – even if you’re completely lost for words, we’re here to help. Here are all the Genshin Impact Barbara hangout endings, achievements, and how to complete them. 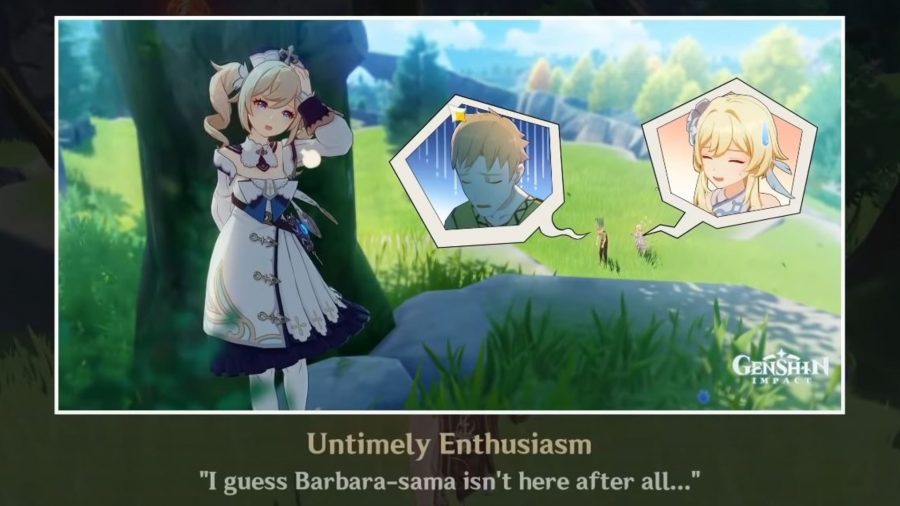 Short of failing the quest entirely, this is one of the worst endings for Barbara’s hangout event. To get it, in the first dialogue choice, choose “Just wait here…” instead of “Let’s go deeper”. Then speak to Albert – it doesn’t matter whether you ask him about the fan club or the berries, but in the dialogue option after that, choose either “It is dangerous here” or “Barbara isn’t here anymore”. After that, you can choose whatever dialogue option you like; you’ll follow Albert as he walks around looking for Barbara – uh oh. Thanks to Paimon’s shouting, she’s gone by the time you return, and you get the ending ‘Untimely Enthusiasm’.

The rest of these endings follow the ‘good route’, where you either choose to go deeper into the forest, or dissuade Albert from looking for Barbara using the option on the left when he asks about Barbara: “Wolvendom is a large area”.

The remaining endings diverge at the ‘Deaconess’s Gratitude’ story point. To avoid leaving the hangout early, when you get to ‘The Church’s Affairs’, choose “Leave it to us” – the alternative, “Perhaps it’d be better…” ends things early. 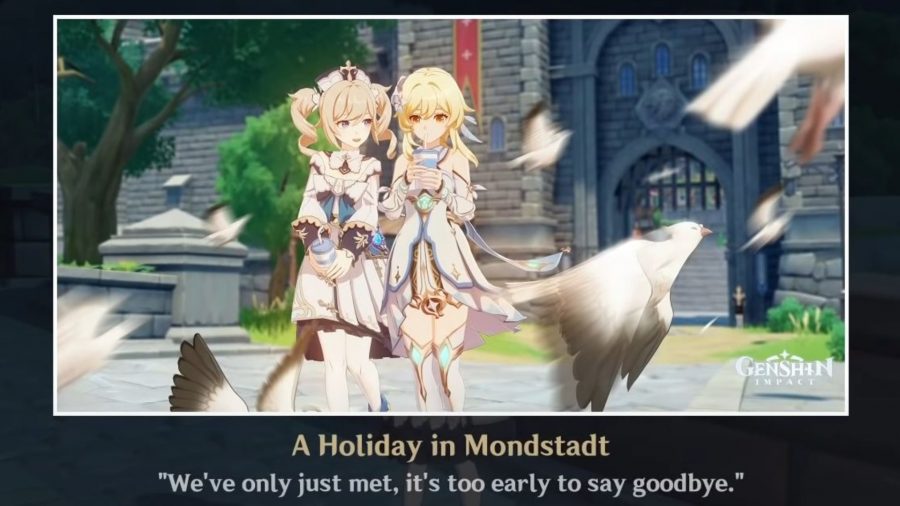 A Holiday in Mondstadt

When Barbara asks you what you’d like to drink, choose ‘sparkling tea’. You meet up with Barbara later and attempt to rescue her from some fans. When speaking to her fans, choosing the second dialogue option is optimal; choosing the first option decreases her hearts, but you’ll still get the ending.

You can also get the ‘An Idol’s Last Line of Defense’ secret achievement if you choose the second dialogue option to successfully discourage each of Barbara’s fans, and also get to this ending via the route where you dissuade Albert, as explained above. If you’ve found out about the Barbara Fan Club from Albert, you can also ask Barbara about it at the end of the hangout. 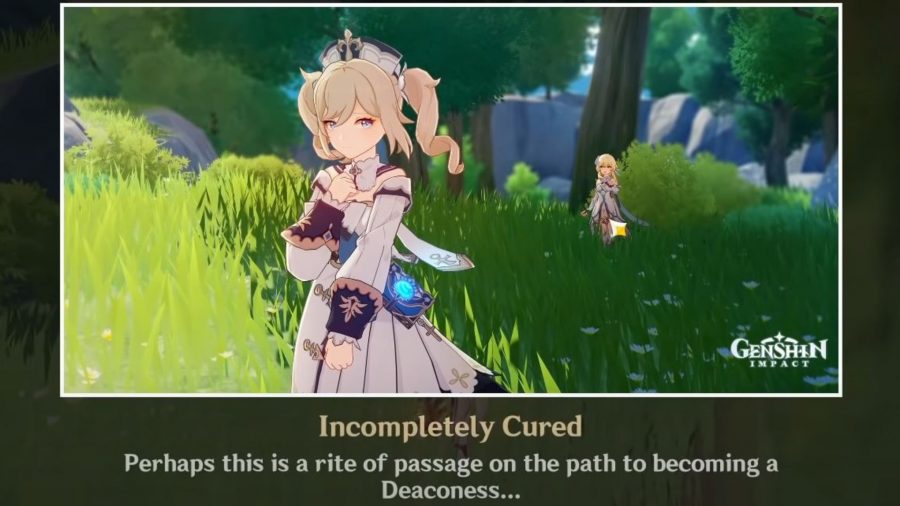 When Barbara asks you what you’d like to drink, choose ‘special Chilibrew’. She asks you about searching for ingredients; say you’d like to stick together. Agreeing to split up will take you on an alternate path to the endings below.

After you head off and kill some Hilichurls, you see a man called Uwe asking for healing. Regardless of what you say to him, Barbara asks you to watch him while she looks for herbs to heal him with. If you tell her he’s a ‘suspicious character’, Uwe fights you. After this, Barbara tells you she’s worried about you – this is the third ending. 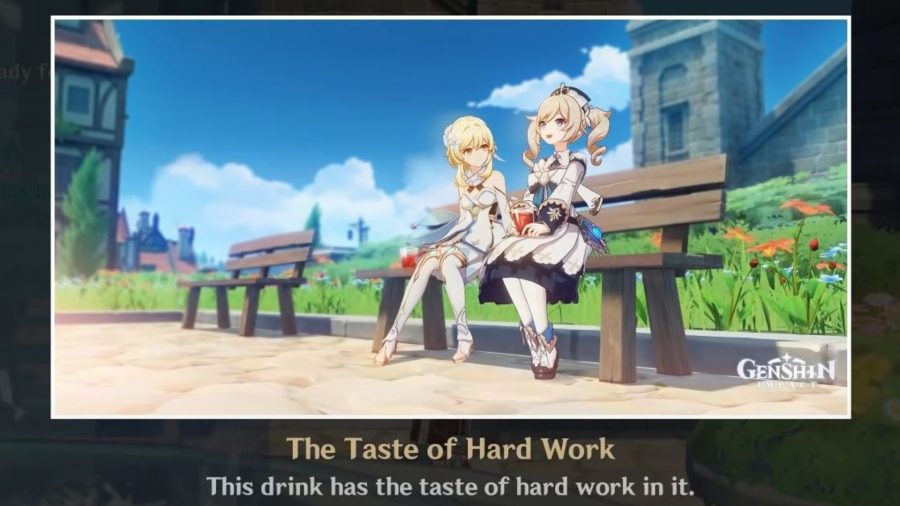 The Taste of Hard Work

Deaconess’s Gratitude > The Second Chilibrew Ingredient > Healing is My Job

You can get this ending through two routes. If you choose to drink Chilibrew, and go together to look for ingredients, and then agree to help heal Uwe, you go off with Barbara in search of herbs. Once you heal him, he gives you some Sweet Flowers, and you go back to Mondstadt and enjoy some Chilibrew with Barbara.

Alternatively, if after choosing Chilibrew, you elect to split up to look for ingredients, you’ll go off and obtain some chilis near the Stone Gate. Barbara is nowhere to be found, so you need to look for her in the forest. She’s found some Treasure Hoarders – once you defeat them, an adventurer offers you a reward. Choose carefully; ‘Mora’ will end the hangout, ‘Sweet Flowers’ will give you the Taste of Hard work ending, and ‘Liyue Chilibrew’ will give you the A Fiery Flavor from Liyue ending. 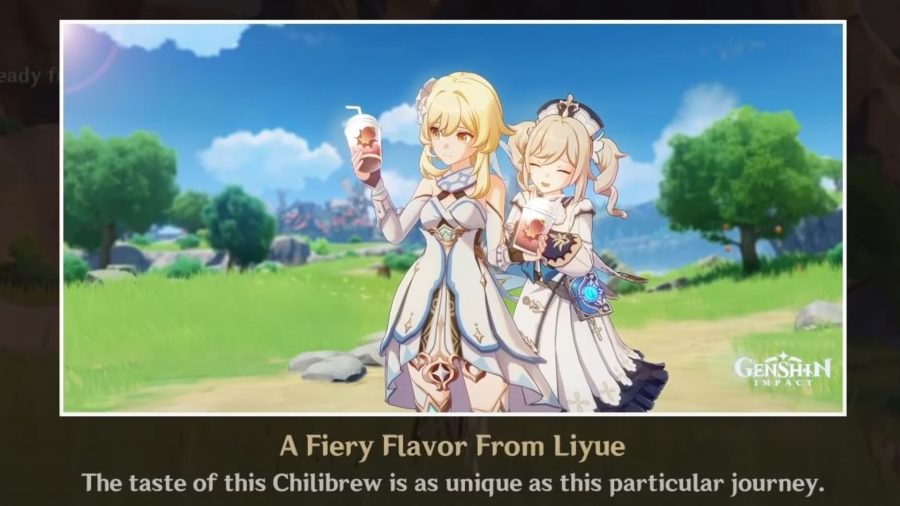 A Fiery Flavor from Liyue

As mentioned above, to get this ending, choose to drink Chilibrew, and then split up to look for ingredients. After fighting the Treasure Hoarders, ask for ‘Liyue Chilibrew’ as a reward. The two of you will drink the Chilibrew together, without having to make it yourselves.

Those are all the possible endings for Barbara’s hangout. If you’re looking for even more friends to hang out with, take a look at our Genshin Impact new characters guide to find out who will be coming to Teyvat soon. We also have detailed Genshin Impact hangout guides on Noelle, Chongyun, and Bennett once you’ve finished speaking to Barbara.