Hunting for the best Genshin Impact Diluc build? Diluc joined the Genshin Impact cast in September and has quickly become one of the best five-star DPS characters in the game. This claymore-wielding Pyro user is capable of dealing high amounts of damage with both elemental and normal attacks. When paired with the correct build and party members, Diluc’s damage output is simply unmatched by anyone on the roster.

As if Diluc couldn’t become any stronger, the Dragonspine region introduced in the 1.2 update is perfect for Pyro characters. Cryo enemies are weak against Pyro attacks, giving Diluc a massive advantage in this area. Head on over to our best Genshin Impact builds guide which highlights Outrider Amber, another Pyro character who works well alongside Diluc.

While you could run Diluc as a support character, he truly shines in the primary DPS role. By building your team around Diluc as the sole DPS character, you should be able to handle almost every enemy in the game with ease – he’s top of our Genshin Impact tier list for a reason. Here’s everything you need to know to create the best build for Diluc in Genshin Impact.

Diluc was created as a DPS character first and foremost, so we want to focus on a build that allows him to deal as much damage as possible. Most of Diluc’s attacks are Pyro-based, so the Crimson Witch of Flames artifact set is perfect for maximising his damage output. If you don’t have this artifact set, aim for artifacts that provide damage boosts to Pyro damage, attack damage, and critical rate/damage.

With just two pieces of the Crimson Witch of Flames set, you can boost all Pyro damage by 15%. This damage multiplier is taken further with four pieces of the set, increasing overloaded and burning damage by 40%, plus your elemental skills receive a damage buff. Unfortunately, there’s nothing in the game that rivals this artifact set – this should be your priority when building towards a DPS Diluc

It’s important to note that in order to get the best out of Diluc, you may need to reconsider your standard attack pattern. To maximise your DPS as Diluc, try to space out Searing Onslaught in between each normal attack. This creates a constant loop of damage rather than creating gaps after Diluc’s standard normal attack animations. By optimising how you attack enemies, you can deal more damage in a shorter period of time. 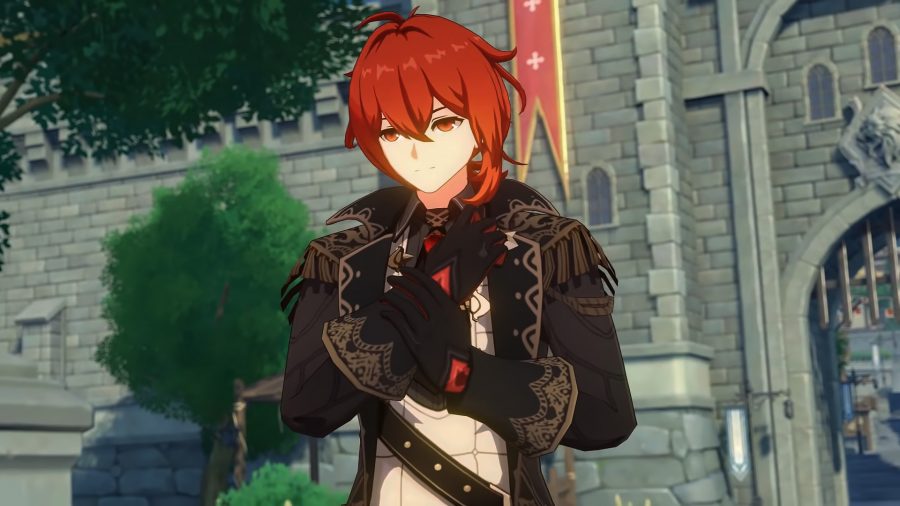 Diluc’s best weapon is Wolf’s Gravestone thanks to its incredible effect that grants all party members a damage boost of 40% when targeting weakened enemies. A cheaper alternative to this would be the Prototype Archaic, a four-star weapon which has a 50% chance of dealing an extra 240% attack damage to enemies. Though this certainly isn’t as good as the Wolf’s Gravestone, the Prototype Archaic can be forged at a Blacksmith and doesn’t involve any gacha mechanics.

Finally, you should try to pair Diluc alongside characters that can get the most out of his abilities. Kaeya works well with Diluc due to his Cryo abilities, which allow you to perform the elemental reaction Melt. Once an enemy is frozen by Kaeya’s ultimate ability, Diluc can rack up loads of damage with his Pyro attacks. Adding Bennett to the party will give you the Fervent Flames elemental resonance effect, increasing your attacks by 25%. Make sure to include a healer like Xingqui to ensure your team stays alive throughout multiple fights.

Diluc attacks with a forward slash that deals Pyro damage. This skill can be used three times in a row, but will be stuck on a ten second cooldown if not cast again within five seconds.

Flames burst from Diluc, knocking nearby enemies back while dealing Pyro damage. The flames converge into Diluc’s weapon, summoning a Phoenix that deals Pyro damage to all enemies in its path. Diluc’s weapon will continue to be imbued with flames for a short period of time, allowing Diluc’s normal and charged attacks to briefly deal Pyro damage. 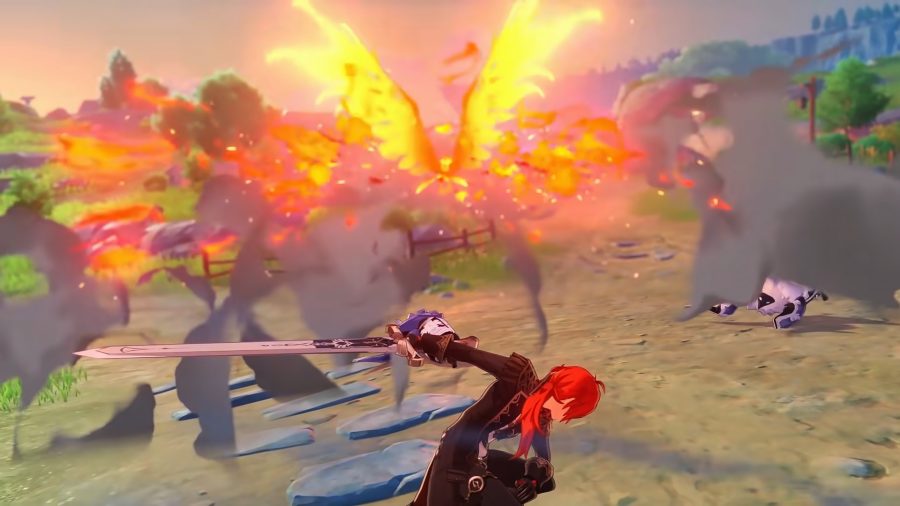