Want to unlock all endings for the Diona hangout event? The Genshin Impact 1.5 update introduced a wealth of new features, including a brand new Genshin Impact character – the four-star Pyro Catalyst wielder Yanfei – and the Genshin Impact housing system, the Serenitea Pot.

As promised, Mihoyo has also added even more content to a new feature from the 1.4 update, Genshin Impact hangout events. These events offer a deeper dive into the lives of the four-star characters that don’t get story quests of their own. They require two story keys to unlock, but once you’ve unlocked a character’s hangout event, you can replay it as many times as you want, enabling you to unlock all possible endings.

You receive rewards, including primogems and hero’s wit, for every ending you complete. Unlocking all endings will grant an achievement – and there are secret achievements hidden in the hangout events themselves, too. However, it’s possible to fail the event without unlocking an ending, if you select too many incorrect dialogue options. Here’s the Diona hangout event walkthrough with every ending explained.

Act 1 – The Cat and The Cocktail 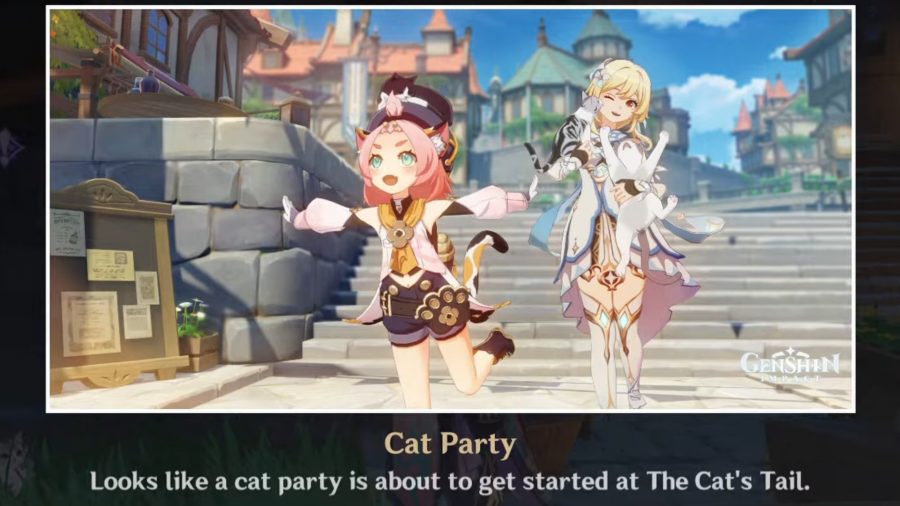 When Margaret, the boss at the Cat’s Tail, greets you, tell her you’re here for the kitties. Then follow Diona as she goes on a quest to retrieve the cats. After obtaining a cat toy from Marjorie, and ordering cat food from Sara at the Good Hunter, you head up to the rooftops of Mondstadt to find the first cat. Climb the house behind Margaret and fly down to where Roger is sitting. Diona asks what to use to attract him – recommend the cat toy.

After successfully enticing Roger, Diona laments his popularity with the customers of her tavern. Tell her the customers visit primarily for her cocktails – telling her how cute Roger is will annoy her.

The second cat, Nelson, is hiding behind the blacksmith. Use the cat food to coax him out, and Diona will berate him for taking all the customers’ attention. Tell her, her specialty drinks attract lots of attention already – as recommending that she emulate Nelson’s behaviour will upset her.

The third cat, Paisley, is at the cathedral. When you find him, Diona once again muses that the cats are more important than her drinks. Tell her no-one would know about the cats if it weren’t for her drinks.

Bring all the cats back to the Cat’s Tail successfully to get the achievement Kitten Queen. 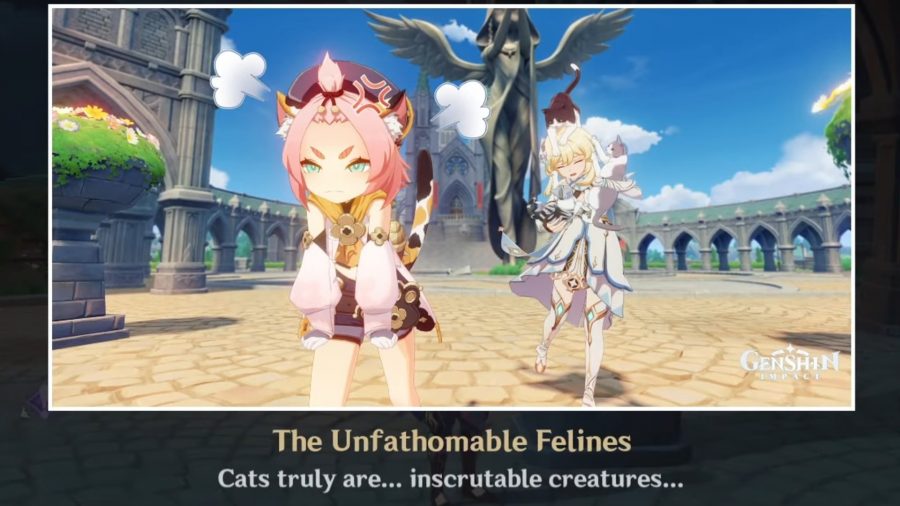 This ending follows the same path as the previous one, but instead of giving Diona reassurance when she talks about the cats, you need to make the mistake of praising the cats instead of her at least twice. Essentially, pick the first dialogue option after finding the cat to frustrate Diona and achieve this ending. 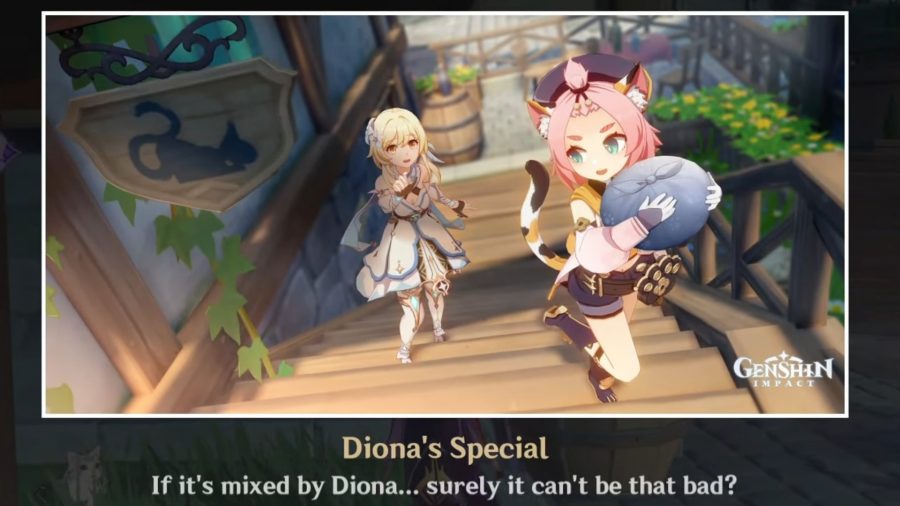 When you enter the Cat’s Tail, tell Margaret you want to try some new specialty drinks. Diona asks you whether you’d like the base or the flavouring to be more unique – request the base. You head out to Dadaupa Gorge and run into Allan, a hunter, who tells Diona that her father is in need of rescue. It doesn’t matter whether you tell her you’ll avoid or defeat the monsters, although if you choose to avoid them and then get noticed, you’ll need to restart. Electing to avoid them takes you through the optional route, ‘The Shadow Over Dadaupa’. There isn’t a secret achievement for taking this route, so it’s up to you.

Once you make it into the Gorge, ask Draff about the herbal soup. Diona will make a drink out of it to sober him up, and after taking him back to Allan; the two of you return to the Cat’s Tail. 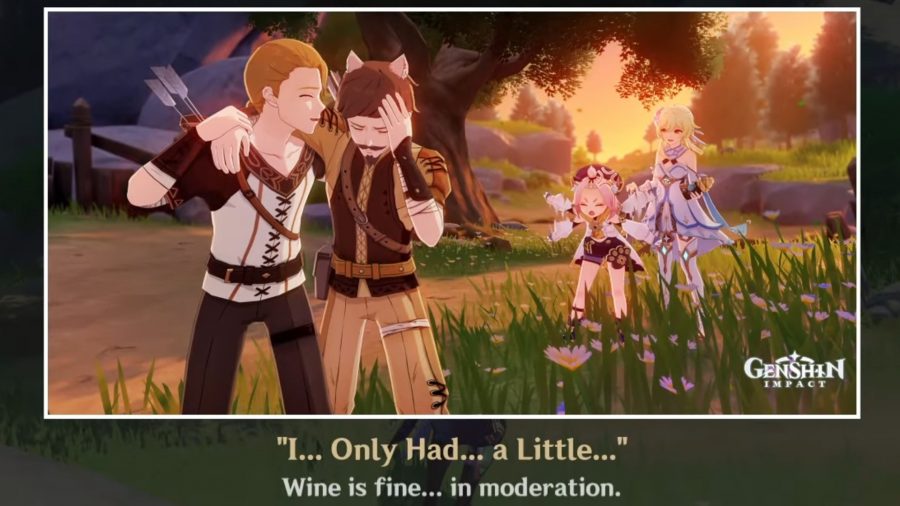 After telling Margaret you want to try specialty drinks, and asking Diona for a unique base, you once again head to Dadaupa Gorge and venture deeper inside. Instead of asking Draff about the soup, elect to head out and deal with the monsters to get it. Inspect the cooking pots scattered around the camp to find the soup; you’ll find it in the last pot in the back. Return to Diona and mix the potent drink for Draff, who has a strong reaction to it. Head back to Allan to unlock the ending “I… Only Had… a Little…”. 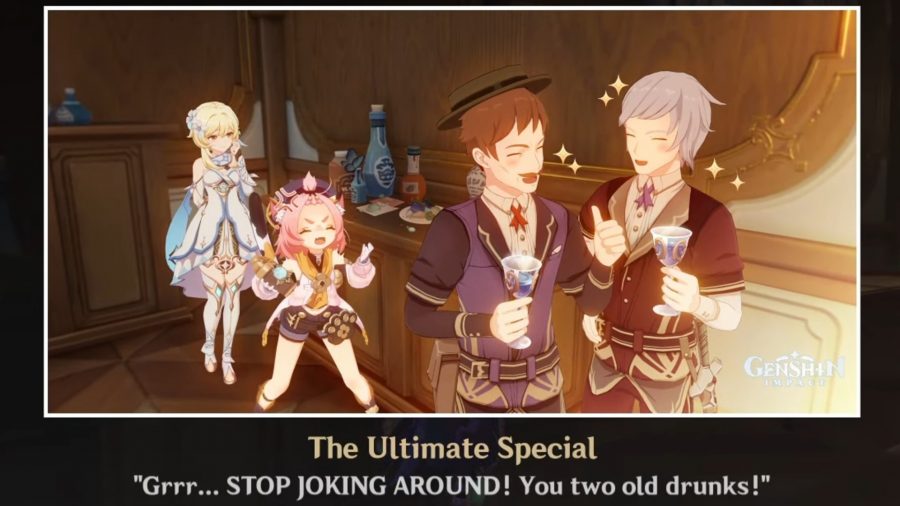 Once again, ask for specialty drinks at the Cat’s Tail, but this time, ask for a unique flavoring. Visit Blanche and retrieve all the ingredients Diona requested – the only thing left is Fish Scales and Slime Condensate. Head out and collect Fresh Fish and Fresh Slime Condensate for Diona, after which you run into Connor the Winemaker, who offers to discuss techniques with Diona. Meet her at the winery, and attempt to make a terrible drink.

Choosing the wrong option will lose a heart. Remember, we’re trying to choose the worst methods for making the drink, so put the whole Lizard Tail in, add all the Slime Condensate, and then add all the Butterfly Dust and Fish Scales to the drink. Diona also tries to make an awful drink, but fails and instead creates something delicious. Attempt to make another drink; it doesn’t matter what you choose; everyone agrees it’s awful. Hand it back to Diona, who tries to make it even worse, but apparently made it taste amazing – this unlocks the final ending, The Ultimate Special.