Want to know how to defeat the Abyss Herald in Genshin Impact’s Twisted Realm in Domain of Heresy? The Energy Amplifier Initiation event has three domains, unlocking stages of the Twisted Realm on successful completion, the final one being the Domain of Heresy, which has one elite enemy that you’re required to defeat: the Abyss Herald. It’s far easier said than done.

The problem with the Abyss Herald specifically is that it’s a bit of a damage sponge. On top of that, it’ll get a bunch of attendants that spawn at fixed intervals. Each one increases elemental and physical resistances for the Abyss Herald, while also healing the Herald a certain amount of health for every attendant alive at the time.

First thing’s first, you should probably check out the best Genshin Impact character builds to get an idea of which characters you should be bringing into the Twisted Realm – we recommend your hardest hitting Cryo characters. Once you’re ready, continue reading for tips on how to defeat the Abyss Herald and complete the Genshin Impact Domain of Heresy challenge.

How to defeat the Genshin Impact Abyss Herald

The first thing we should talk about are the attendants. They are hilichurls that provide resistance buffs and heal the Abyss Herald, so you’ll need to wipe them out before they set back your progress too much. The Herald spawns four attendants every 30 seconds or so, replacing any existing ones with new copies. The good news is that you don’t have to constantly deal with the hilichurls throughout the fight, as they stop spawning when the Abyss Herald initiates the Dark Descent phase.

Next, let’s talk about crystals. Throughout the Energy Amplifier Initiation event, there are crystals that you can equip to make this fight a bit easier. Timely Rain is incredibly helpful for giving you another option for freezing your opponents. This will be the main tactic of this fight. You can also use Ironbow and Frostbite to amplify your Cryo DPS’ damage output. The rest are optional, so feel free to experiment to see what combos work best with your party. 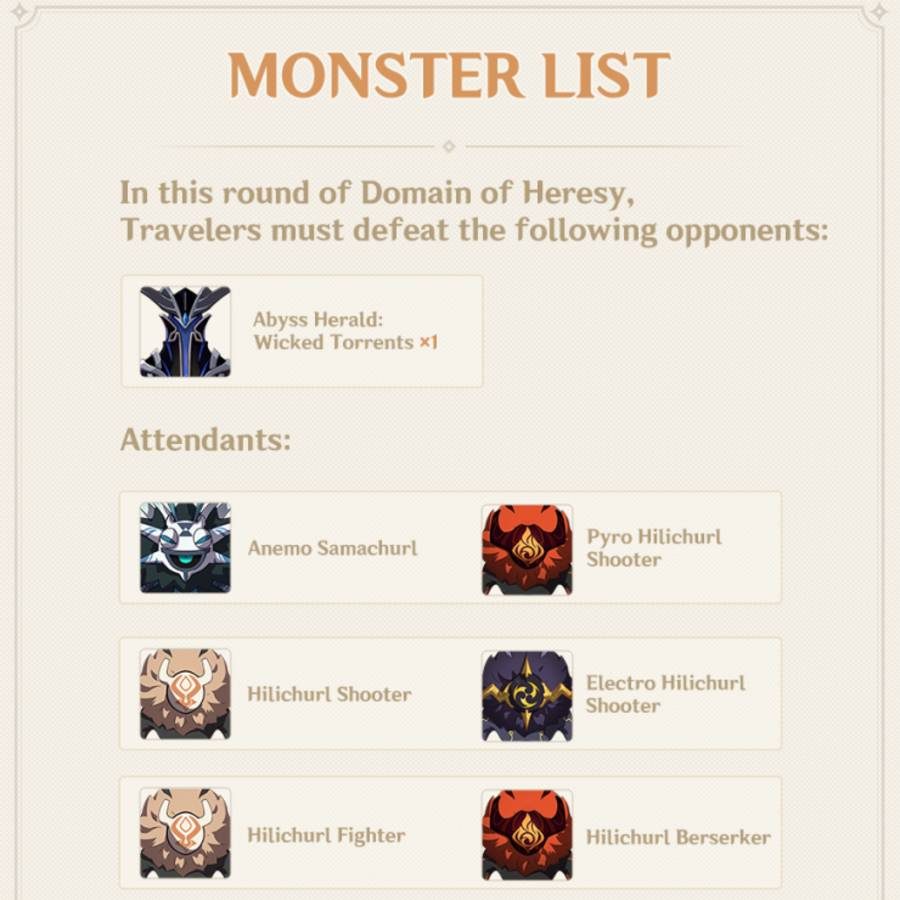 Now onto the fight itself. The Abyss Herald has essentially been knocking back protein powder to make itself bigger and more durable. It still has the same attacks as before, only they now hurt a lot more as it is level 90. It has several attacks of its own, all of which shouldn’t be too hard to dodge, though it does have a nasty attack where it spins in the air vertically and slashes with its blades.

To take out the Abyss Herald’s minions, you’ll want to initiate crowd control skills and AoE techniques to gather them all together, and annihilate them quickly. If you have Venti and Ganyu, then this should be relatively easy. Use Venti’s tornado burst attack to bunch them up together, then blast them away with Ganyu’s charged attack. The burst attack coats everyone in Hydro, which if you know about the Genshin Impact elements will make them all vulnerable to being frozen by the charged attack. Alternatively, both Ganyu and Zhongli have a burst attack to cause the same Timeless Rain effect that Venti’s tornado inflicts.

Keep doing this until the boss initiates the Dark Descent phase. This turns the Abyss Herald into a being of pure Hydro, so you don’t need to inflict the Timeless Rain effect to freeze the Herald in place. You can then just wail on it with either Cryo or Electro damage until it is defeated.

Once you’re comfortable with the fight and have a strategy to make the Abyss Herald melt with your team’s attacks, you can begin tinkering with modifiers and challenges to make the fight more taxing.

And that’s how to defeat the Genshin Impact Domain of Heresy, Abyss Herald. While you’re here, why not check out some of our other guides, including the best Genshin Impact Fischl build. We’ve also got Genshin Impact codes, and tips for Diona’s hangout event.