But that’s not even the hard part. The main challenge is not to clear the Domain, but to find it. You may have already realised this, but the entrance to the Empty Boat of a Thousand Gates Domain is underground. In fact, it’s part of a very large underwater area beneath Narukami Island.

So, how does one unlock the Empty Boat of a Thousand Gates Domain? We’ll explain how to find the Domain below, how to solve the puzzles, and how to clear the Domain itself.

Requirements to unlock the Empty Boat of a Thousand Gates Domain

Be careful not to waste your time searching for the entrance to this underwater Domain; you can’t access this cave unless you reach a certain point in the Sacred Sakura Cleansing Ritual questline. If you haven’t done so yet, start the ‘A Strange Story in Konda’ World Quest first. Complete it, and then continue with the follow-up World Quest ‘Sacrificial Offering’.

During Sacrificial Offering, you receive the Memento Lens. Now you’re able to use this to open the entrance to the Narukami underwater area, where you find one of the shrines you need to purify as part of the Sacred Sakura Cleansing Ritual. 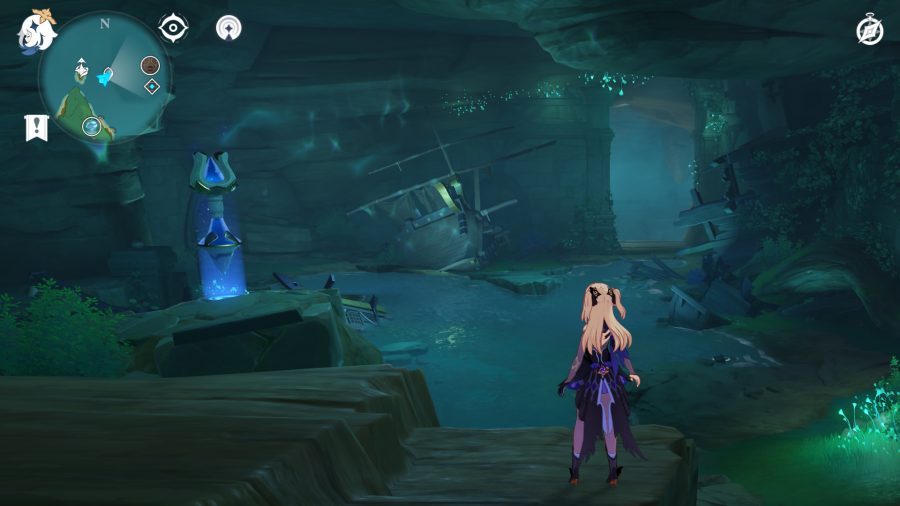 Now that you have the Memento Lens, head to the Araumi region (north of Narukami Island) and activate the four Electro mechanisms surrounding the old stone tower and the large tree. There are four Electro mechanisms in total. Three of them are activated by simply using an Electro attack on them, but one is surrounded by Electro squares. You need to turn them in the correct order to solve this Araumi electro puzzle and activate the mechanism.

Next, go inside the stone tower ruin and use the Memento Lens on the little Earth Kitsune statues. After that, just pull the three switches to open the floor below you. Once you’re inside the cave, the Sacred Sakura Cleansing Ritual location is in front of you, and the path to the rest of the underwater area (including the Empty Boat of a Thousand Gates Domain) on your left. 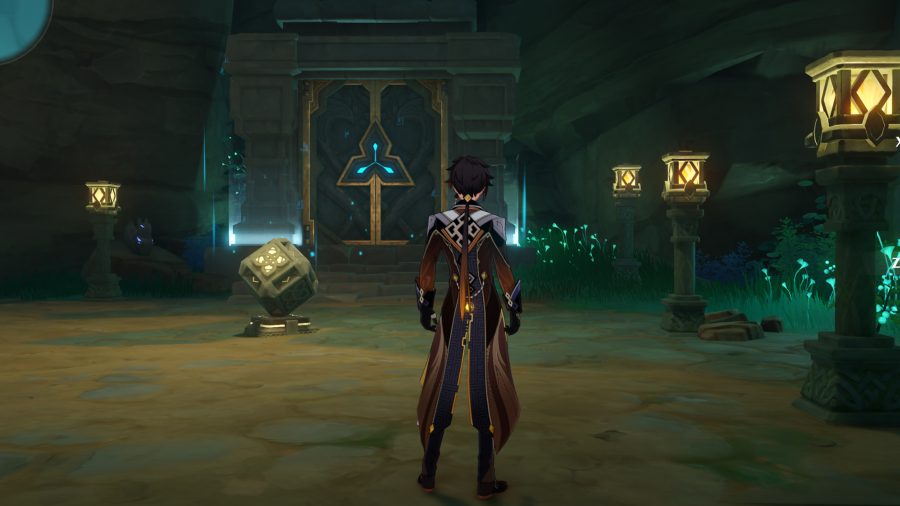 As you can see, the rest of the cave is still filled with water. Get rid of it by solving another Electro square puzzle (use the guide again if you need help). After that, you can jump down and swim through the tunnel, then go up the stairs. Here’s where you find the third and final Electro square puzzle needed to unlock the Empty Boat of a Thousand Gates Domain.

Finally, open the round door, then proceed through the lower round door in the next room (on your left) and just keep following the path while defeating the mechanical enemies as you encounter them. The Perpetual Mechanical Array boss is in a hall below you, but you should keep to your right and continue your way on the upper floor. This is where you find the Empty Boat of a Thousand Gates entry puzzles.

The final puzzles before the Empty Boat of a Thousand Gates are relatively easy. You need to step on each tile once, ending on the one with the blue haze. To solve both puzzles, just walk in a circle (outer ring, then inner ring) until you’re done. 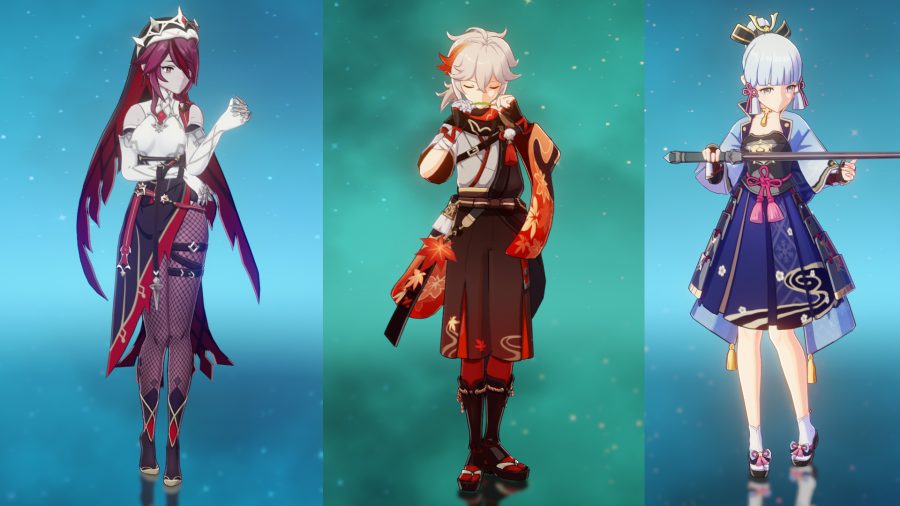 Best team for the Empty Boat of a Thousand Gates Domain

You face no more than two opponents inside the Empty Boat of a Thousand Gates Domain: one Electro Samurai and one Pyro Samurai. You can still use your best Electro and Pyro characters if you have them, but Cryo and Anemo would be even better. If you’re able to use two Cryo characters, it’s strongly advised that you do so in order to get the Elemental Resonance buff. As these Samurai are not to be underestimated, take your best healer or shielder as well. 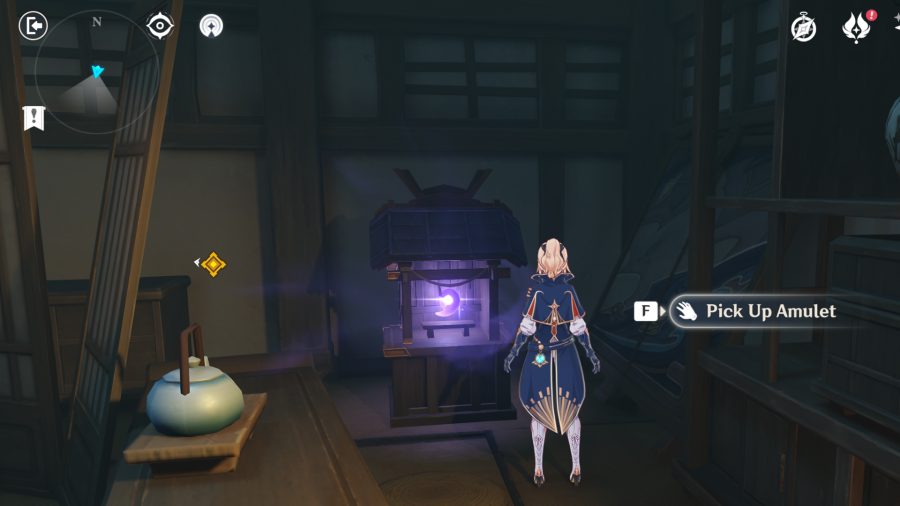 Here’s how you get through the Empty Boat of a Thousand Gates Domain quickly. First, just glide down. Then open the wooden wall on your left and grab the little purple Electro Amulet. Now go in the opposite direction until you hit a (seemingly) dead end, then remove the wall on your right. There’s a second Electro Amulet behind the planks on your left.

Walk back until you can go no further (there’s a new dead end behind you). Then open the wooden wall to your right, and then in front of you. There’s a large Electro door that can only be opened with the Electro Amulets. The first two automatically attach themselves to the door. Walk back, turn left, and open the wall on the left. You now need to move every wall to the right to gain access to the last Electro Amulet.

Opening the big Electro door will take you to the last stage of the Empty Boat of a Thousand Gates Domain; the boss fight. Note that you need to fight the Electro Samurai first, and the Pyro joins later. You might want to save some Elemental Burst attacks to finish the Electro as quickly as possible once the Pyro joins the fight. Finally, pay attention to their attack pattern; the dash and jump attacks take some initiation time, so you can easily avoid them using your Sprint.

You’ve now completed the one time Inazuma Domain ‘Empty Boat of a Thousand Gates’. Time to find yourself a Shrine of Depths in Genshin Impact to make use of that shiny new key you just got!