Want to know what the best Genshin Impact Gorou build is? One of the newer Genshin Impact characters, Gorou is a Geo bow user with a unique skill. Any damage done with his skills uses his defence stat, but it’s not worth raising his defence to astronomical degrees to get the best build. Instead, he’s best suited to supporting other Geo users. Why specifically Geo? It’s all because of his elemental skills.

Gorou’s skills become more potent the more Geo users there are on your team. You only get the full benefits if you have three Geo users (an Gorou counts towards this quota) and one character of another element. It makes him fantastic at supporting Genshin Impact’s Itto to ensure it deals the maximum damage possible. His skills also work well with a good Albedo build since Albedo’s abilities synergise with Gorou’s nicely. Your final team member should be someone who can take advantage of the Crystalise Genshin Impact elemental reaction.

Here, you will find the best Gorou build, including which weapon and artifacts you should give him, why you should unlock his fourth constellation, and what role he plays as a support in your team.

For this build to work, you first need to unlock Gorou’s fourth constellation – Lapping Hound: Warm as Water This constellation makes his elemental burst ability even better. If the area of effect, known as General’s Glory, has either the Impregnable or Crunch states, it also heals active characters within the AoE for 50% of Gorou’s defence. Naturally, we want Gorou to activate this as often as possible. 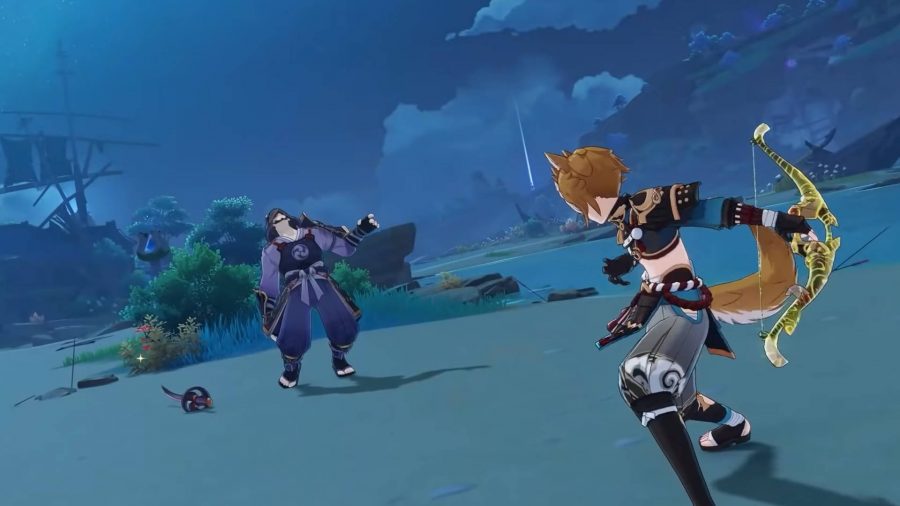 The best weapon for this build is the Favonius Warbow. With this weapon equipped, every time he lands a Crit hit, the bow generates six energy particles (there’s a short cooldown after generating this energy). Since Gorou has terrible natural energy generation and his elemental burst cost is expensive, this bow does a lot to help him with this weakness. Upgrade this bow to its maximum level to get a 100% chance to generate the energy for each Crit hit, with a cooldown of just six seconds. Sacrificial Bow is also quite good for ending his cooldown a little bit sooner, but we recommend energy generation above this.

The natural pairing for Gorou’s abilities is the four-piece Husk of Opulent Dreams set. With it, Gorou gains a ‘curiosity effect’ whenever he hits an enemy with a Geo attack, and it helps buff his defence a little bit. This effect is why we think having the fourth constellation active is key to the build. If you have the four-piece set equipped, your specials boost defence and the constellation’s healing power to all allies.

Noblesse Oblige also helps buff the attacks of all party members by 20% for 12 seconds if you have the four-piece set, so it’s a good alternative if you don’t have the Husk set. The Emblem of Severed Fate is also a legitimate alternative, as the two-piece tier gives you a 20% boost to energy recharge, which is important given the high energy cost of Gorou’s Elemental Burst. Two pieces of four-star The Exile set also achieves this, and you could combo the two together, or have two of Opulent Dreams and two of one of the energy regen sets.