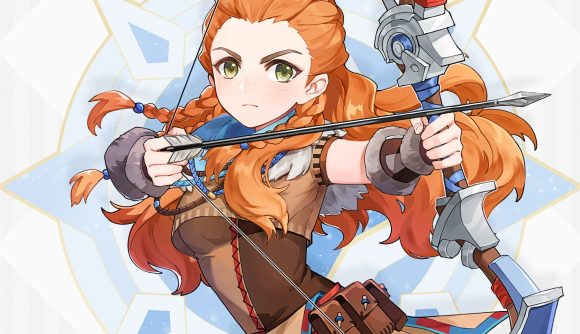 Soon you’ll be able to add a character to your Genshin Impact party who isn’t from around these parts. Mihoyo has revealed that the popular anime game is getting Horizon Zero Dawn’s Aloy as part of a collaboration event with Guerrilla Games.

Aloy will be a five-star character with a unique set of skills and animations you can pick up for free for a limited time. As you might have guessed, she’ll be a bow user, but she’s also “acquired a Cryo Vision in this world and can wield unique elemental power in combat and exploration”, Mihoyo explains in a press release. You’re also getting a free four-star bow that’ll give the Horizon Zero Dawn lead a buff.

If you’re playing on PC, though, you’ll need to wait a bit longer to get her. Mihoyo also shares that Aloy will be exclusive to PlayStation for a time, coming to the console in update 2.1. She’ll be available elsewhere, though, once update 2.2 rolls around. All you have to do is make sure that your Adventure Rank is at level 20 at the least.

Genshin Impact got its 2.0 update earlier this week, bringing a new region to explore alongside new faces to meet. Ayaka is currently the new face around town, but Yoimiya and Sayu are heading your way soon before the update is done.