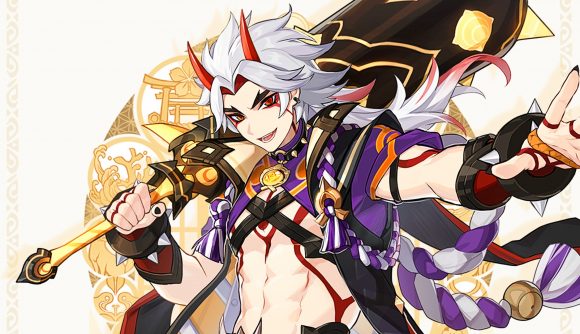 Genshin Impact’s 2.2 update is set to release this week, but Mihoyo is already teasing what’s happening beyond that, the cheeky wee scamps. The developer has taken to Twitter to share some character information on two characters, one who you’ll find familiar and another you won’t have seen before – not in any official capacity, anyway.

First up, we have Arataki Itto, who is the boss of the Arataki gang, if the name wasn’t a wee bit of a tease. Most of the information given fleshes out his character rather than providing any practical details – he’s “an intrepid man with Oni blood running through his veins” who is “fast as the wind and mighty as thunder”. From his image, though, we can see that he’s a claymore user and wields the Geo element.

We’ve also got some more information about wee Gorou. The general of the Watatsumi Army is also a Geo user and can be seen wielding a bow in the picture posted to Twitter (below). As for your character teaser, he’s “born with a beast-like fighting intuition and tenacious will” and can “find a way to victory even in the most critical moments”.

We’ve caught a glimpse of Goro before in Genshin Impact 2.0 reveal, with Mihoyo confirming back then that he was a character in the game. The characters and banners of update 2.2 have already been locked in, so I doubt we’ll see Itto or Gorou too soon.

The First and Greatest Head of the Arataki Gang

Fast as the wind and mighty as thunder, he is an intrepid man with Oni blood running through his veins.#GenshinImpact pic.twitter.com/YotIulzlYp

Chances are, though, we’ll see them not long after that. More recently, Mihoyo has taken to Twitter to tease upcoming characters, which initially came when banner leaks were more prominent in the community.

Born with a beast-like fighting intuition and tenacious will, he can find a way to victory even in the most critical moments.

Within Gorou exists a soul as vast and reliable as the earth.#GenshinImpact pic.twitter.com/4ei5glffhc

If you’re looking for more of the best Genshin Impact characters to add to your squad ahead of time, you can follow that link.