Do you want to know where the Memento Lens is in Genshin Impact? This quest chain seems to be confusing a lot of players, as it’s not very clear where to find the Memento Lens in Inazuma. Genshin Impact 2.0 is by far the biggest update to the game yet, introducing a whole new region, and brand new characters like Ayaka, Yoimiya, and Sayu. There’s also new bosses to fight like Baal and the Perpetual Mechanical Array.

This quest chain contains a number of new Genshin Impact characters that are almost guaranteed to return when more story quests are revealed. The Inazuma region is known for its Electro properties – the Traveler gains a brand new set of abilities as the Electro Traveler when they visit the Statue of the Seven.

Unlocking the Memento Lens can be confusing, so we’ve broken down every step to ensure you don’t get lost throughout the long mission. In order to begin this mission, you need to have already started the Sacrificial Offering quest. Here’s how you can find the Memento Lens in Genshin Impact.

A Strange Story in Konda

The first mission in this quest begins with ‘A Strange Story in Konda’. Speak with the shrine maiden on the edge of Konda Village, located on Narukami Island. Once you’ve reached the village, start asking the locals for information about the barrier. After you have a chat with several villagers, the quest asks you to search the area for three clues.

The first clue is a purse near the dried up well, the second clue is next to a broken cart, and the third is right below a red challenge totem next to wooden planks and rope. Take all of these clues to the village chief – make sure you present the items in the order you found them in, otherwise the chief can ignore you.

After confronting the chief, head to his rooftop and pick up his diary. Find the area detailed in the notebook, there are numerous enemies in the area also searching for something. Take them out and dig in the area to find the Old Key. Run back to the dried up well and use the key to open it. Drop down into the well and break the rocks with a mysterious purple glow emitting from them. 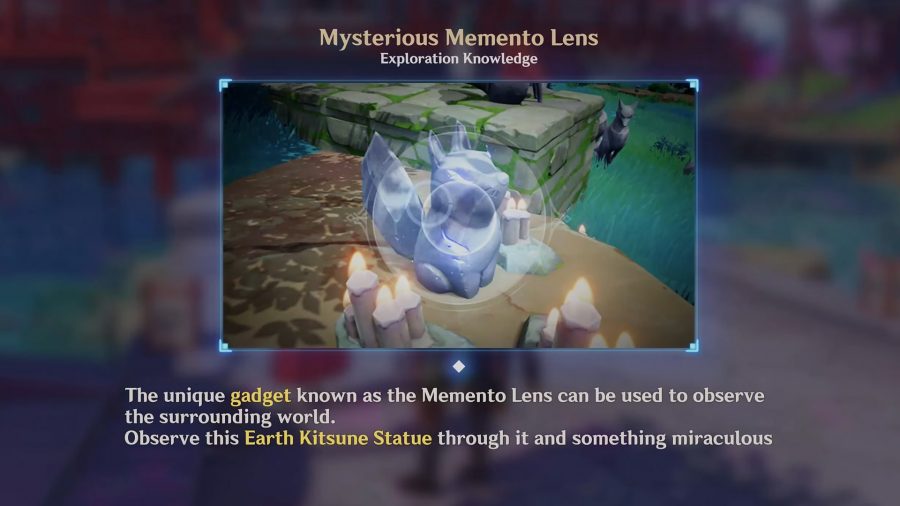 Descend deeper into the cave until you find a shrine that needs purifying. Use a Ward Place to begin the cleansing process. This activates a simple light puzzle that requires you to switch on each shrine in the correct order. Once you’ve adjusted the order correctly, pray to the shrine to summon an Ochimusha. Defeat this enemy and speak to Kazari – she confirms you are capable of cleansing the area.

Go back to the abandoned shrine northeast of Konda Village and chat to the mysterious shadows. Speaking to these shadows sends them towards the nearby statues. If you’re having trouble finding the last mysterious shadow, be sure to check the rooftops. The mysterious shadows reveal several treasure chests, including one containing the Sacred Sakura Cleansing Summary. The final step is to head to the Grand Narukami Shrine and speak to Inagi Hotomi to unlock the Memento Lens. Once you unlock this quest item, you can look at all of the small fox statues to complete the rest of the quest.

And that’s all you need to find the Memento Lens in Genshin Impact. Have you checked out our Genshin Impact codes guide? We’ve collected all of the available codes to ensure you can claim free in-game items like mora and primogems. After almost a year, fishing is finally coming to Genshin Impact 2.1. Read our guide to find out what else is coming to the game.