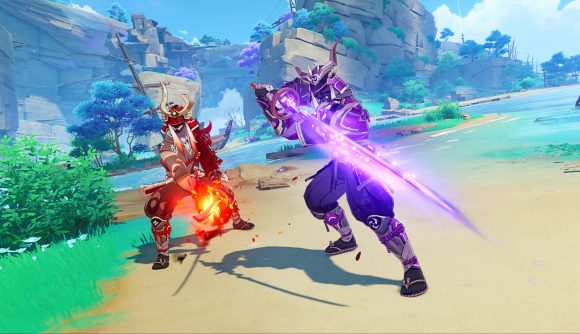 If you, like me, enjoy an anime with a good tournament arc, you might be interested in checking out Genshin Impact’s next event. Phantom Flow is an “imaginary, no-holds-barred fighting tournament” that you initiate with the help of Shousen, the master of Inazuma’s Shinryuu. The event kicks off tomorrow (August 20) and runs for ten days, offering Primogems, Mora, and Hero’s Wit experience books for taking part.

There’s a new themed challenge to master each day, which you can tackle through one of two modes. Shoden features three difficulty levels, whereas Okuden mode offers a more demanding challenge that’s only accessible if you complete Shoden’s extreme difficulty mode. We’re starting things off with the Electrograna’s Triumph. Completing the extreme challenge means defeating 150 enemies in three minutes without dying or going for 25 seconds before netting a kill maybe.

So what’s the theme? You can get an energy recharge boost of 100% if you’re carrying an Electrogranum, whereas using three elemental bursts within ten seconds will unleash a bolt of lightning to strike a maximum of five foes. We don’t currently know the theme for the other challenges, but you’ll probably find out as each day launches.

If you fancy taking part, you’ll need to be over Adventure Rank 30 and have the Archon Quest Ritou Escape Plan and World Quest Chisato’s Letter wrapped up.

Genshin Impact’s 2.1 livestream is set to kick off tomorrow on Twitch, revealing what’s coming our way alongside the Genshin Impact 2.1 release date. If you’re looking for some Genshin Impact codes in the meantime, though, then you know where to click.