We all want the best Genshin Impact weapons, but we also all want free stuff. If you are going to wait for five-star weapon results from your Wishes you might have to wait a long time, or you will have to invest a lot of money in Genshin Impact. There’s always the weapon pity system introduced in 2.0, but for many players, it is more feasible to find good weapons by playing.

Luckily, Genshin Impact offers enough quality three and four-star weapons that you can find in the open world or craft yourself, so there’s no need to invest in Wishes to complete your best Genshin Impact builds. Some of the freely available weapons are better than others, but since their number is limited, all are worth getting.

We’ve included some of the best, but keep in mind that the value of a weapon depends greatly on the situation, the Genshin Impact characters you want to use it for and plenty of other factors like the monsters you’re going after and what Genshin Impact artifacts you have.

The three-star Dark Iron Sword is an excellent weapon for combining melee DPS and elemental power. It has the highest three-star sword Base Attack, and it increases Elemental Mastery. It also increases the character’s Base Attack after causing an Overloaded, Superconduct, Electro-charged, or an Electro-infused Swirl reaction. 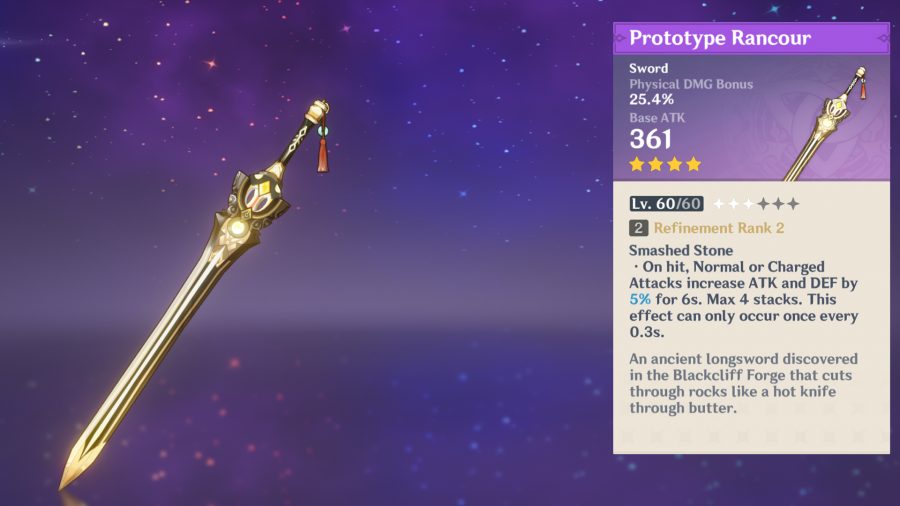 But perhaps the best thing about this sword is that you can get it for free without having to open chests. Travel to Liyue Harbor and talk to Chen the Sharp; he will give you the sword. Find him in the southern part of the city, next to the other food vendors.

Three-star Harbinger of Dawn is a fantastic weapon if you have a good healer on your team. As long as the character’s HP is above 90%, their Critical Rate increases by 14% and up to 28% (depending on weapon level). This is great in combination with the weapon’s secondary stat, which increases Critical Damage.

Four-star Prototype Rancour has one of the highest base attack powers. It is a true DPS weapon with a physical damage bonus as its secondary stat, and an increased Base Attack and Defense of 4%-6% upon every hit. This effect will last for 6 seconds and has a maximum of 4 stacks. And the best thing about it; you can get it by simply reaching Adventure Rank 10. Speaking of which, here’s our guide on leveling Adventure Ranks fast in Genshin Impact. 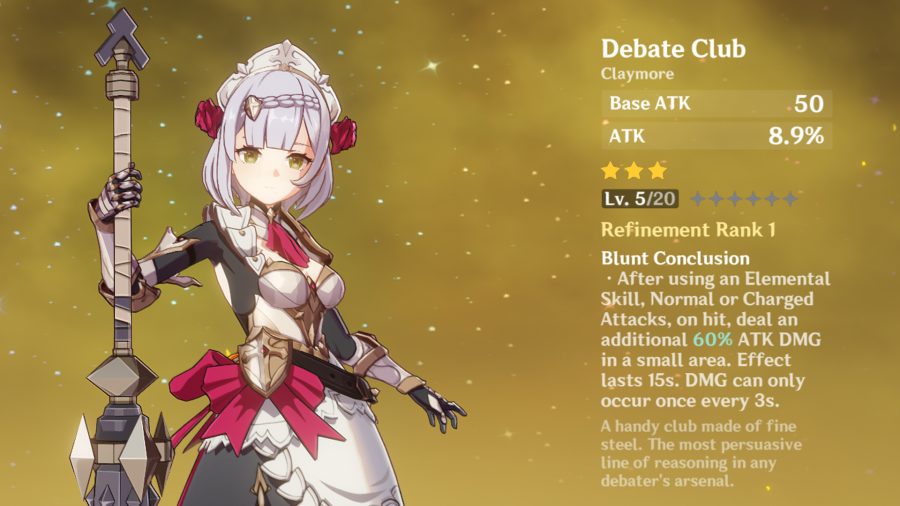 The three-star Debate Club is an amazing damage dealer. After using a normal, charged attack, or Elemental Skill, it will deal an additional 60% Attack Damage. In addition, its secondary stat type grants even more attack power.

Four-star Whiteblind is most useful for a tanky character that relies on physical attacks. It is highly dependent on playstyle whether this claymore will be of use to you. It increases Defense as a secondary stat, but also through its passive. Every normal or charged attack increases Base Attack and Defense by 6%-12%, with a maximum of four stacks.

If you want a four-star claymore with more damage output, you should try to forge the Prototype Archaic instead. It has a much higher Base Attack and grants an additional 50% chance to deal a further 240% Attack Damage to nearby enemies once every 15 seconds.

If you cannot yet forge a four-star weapon, the three-star Skyrider Greatsword is a good alternative. It increases your attack by 6%-10% for 6 seconds upon every physical hit. 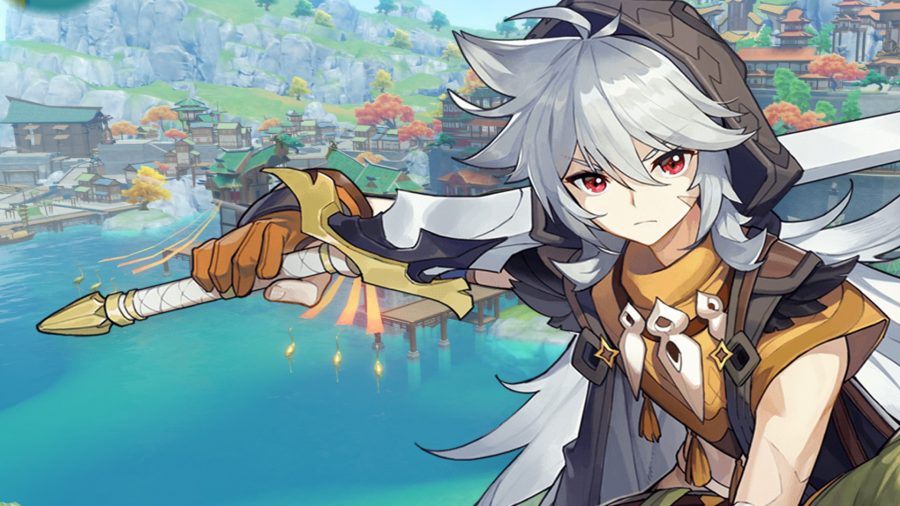 Unfortunately, there are currently not many great polearm weapons in the game. When it comes to three-star polearms, not one of them really stands out. Try to find a White Tassel if your character relies on fast attacks. It increases Critical Rate and normal attack damage. The Halberd is a decent alternative with a higher attack power and a passive that deals 160%-320% additional normal attack damage every 10 seconds.

The four-star Prototype Starglitter increases normal and charged Attack Damage by 8% after using an Elemental Skill. This effect lasts 12 seconds and can be stacked twice. This polearm also has a base energy recharge of 10%. This weapon is the most useful to characters built for Elemental Damage.

In contrast, the four-star Crescent Pike is far better for physical damage dealers. Every Elemental Orb or Elemental Particle picked up by the player enhances the normal and charged Attack Damage by 20% for 5 seconds. It also gives a physical damage bonus.

There is a graet polearm option for Baal in the form of four-star newcomer The Catch, which you’ll need to trade for using fish to obtain. It increases Elemental Burst damage by 16%, and Elemental Burst CRIT by 6% 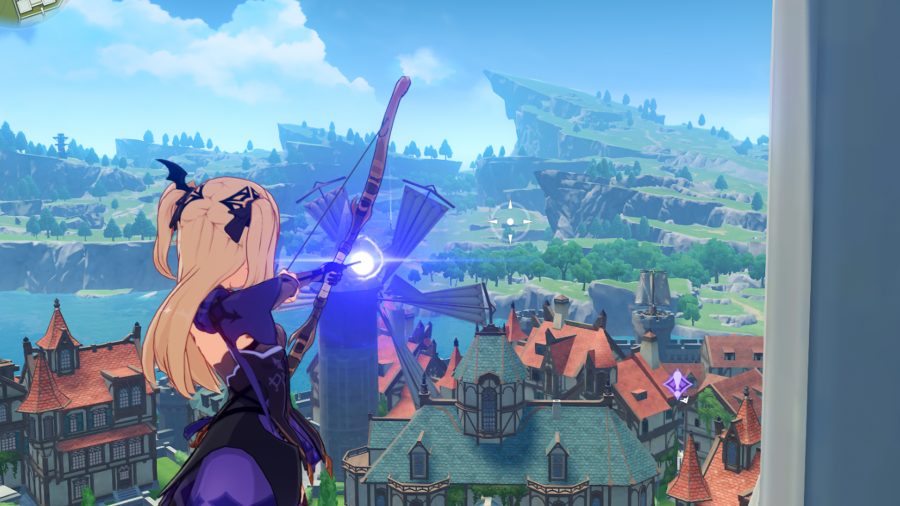 Although there are three four-star alternatives, the three-star Slingshot is worth mentioning as well. Whenever a shot lands within 0.3 seconds after firing, damage is increased by 36%-60%. So, as long as you fire it from melee range, this bow can easily keep up with a four-star one.

The four-star Favonius Warbow can regenerate energy upon every critical hit. It also gives a higher energy recharge as its secondary stat. Beware that this bow is less helpful to characters without a high Critical Rate or useful Elemental Burst. But the greatest thing about this bow? You get it as a reward for completing the “A Long Shot” quest, the last part of Prologue Act III.

The four-star Prototype Crescent bow is great for ranged damage output. It increases attack power and movement speed for 10 seconds. As the player has to go for the weak spots to get the most out of this weapon, you will probably use it for a long-ranged DPS (unlike the Slingshot). Use the movement speed to keep your distance from enemies.

If you are not going for the enemy weak spots but you do want higher attack damage and speed, you should go for the four-star Compound Bow instead. The enhancements you get are lower, but you only need to hit the enemy with a normal attack or Charged Attack, which makes it an all-around decent bow to use. The Compound Bow also grants a physical damage bonus. 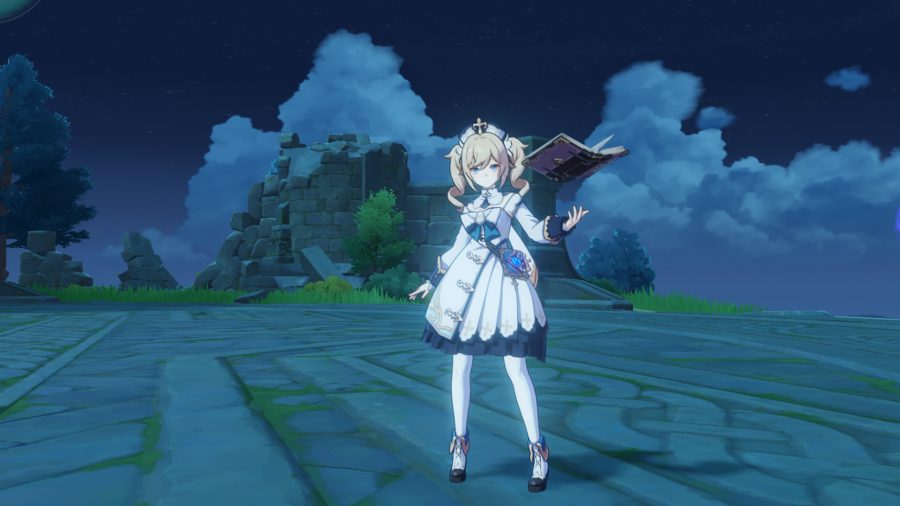 A support catalyst character can hardly go wrong with the three-star Thrilling Tales of Dragon Slayers weapon. Every time you swap to another character, it increases their attack power by 24%-48% for 10 seconds.

The four-star Mappa Mare is great for catalyst Elemental Damage dealers. A 10-second Elemental Damage bonus triggers upon every elemental reaction. It also has a very solid Base Attack and increases Elemental Mastery.

The four-star Prototype Amber is more suitable for supporting characters. It provides increased HP for the user, plus increased energy recharge for 6 seconds after using Elemental Burst. During that same time, all teammates will regenerate 4% HP every 2 seconds. Keep in mind that this effect may be superfluous if the character already regenerates a lot of HP with their Elemental Burst itself. 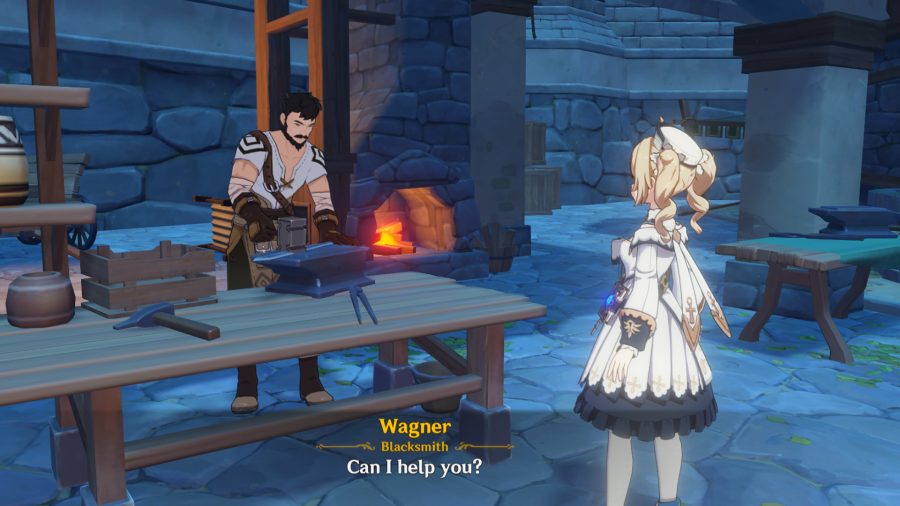 How to get these weapons

The Dark Iron Sword, the Favonius Warbow, and the Prototype Rancour are easily obtainable by playing through the story. The rest can either be crafted (four-stars) or found in chests (three-stars). Chances are that you already collected many of the three-star weapons by simply playing the game. To start making your own four-star weapons, go to a Blacksmith. You can find one next to the entrance to the city of Mondstadt, or in the southern part of Liyue Harbor.

The crafting materials you will need are Crystal Chunks and White Iron Chunks. You can collect them anywhere in the wild, but Crystal Chunks are especially prominent in Stormterror’s Lair and White Chunks in the Stormbearer Mountains and Wolvendom. Collect at least 50 of each to have enough for one handcrafted weapon. On top of that, you need a weapon prototype. You can collect those from weekly bosses or by buying them in the Mondstadt and Liyue Harbor Souvenir Shop’s (limited to one of each).

And there you have it – the best free Genshin Impact weapons and how to get them. In the event you do feel like spending some money, check our Genshin Impact banners guide to see what’s available right now. Are you trying to unlock a specific five star weapon? If you’re looking for more free stuff, keep an eye on our Genshin Impact codes page.