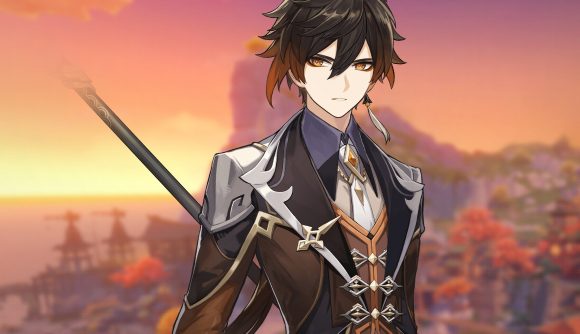 If you’re a Zhongli fan, you’re in for a real treat. The Genshin Impact character’s been treated to a new (concept) outft inspired by the anime game’s cutscene artwork by a fan, which imagines the polearm fighter in his Archon garb. The kit’s been rendered in 3D with a bunch of custom textures, and looks the real deal – so much so that fans are joking (and really wishing) that it’s a ‘leak’ of an upcoming skin rather than a fan-made concept.

“I modelled and rendered Zhongli’s Archon outfit,” Genshin fan Ben Ayers, a freelance 2D and 3D artist, announces on Reddit, alongside a brief clip showing Zhongli in his Archon hooded robes (below), which look hugely faithful to the action-RPG game’s art style. And those seen in the game’s cutscene snapshots, of course. While it draws on the original model’s textures and meshes for Zhongli’s face and hair, the rest of what you see is created by the artist – and it’s a really accurate-looking render.

The flowing white and black hooded robes, with geometric designs and antique gold-hued belt and cuffs look pretty stunning, and completely believable as an actual skin for the Geo character.

It looks like the concept’s got Zhongli fans pretty excited, too. As of writing, the post’s received more than 13.2k upvotes, and fans have been piling in to compliment it. “Oh, how I wish this was a leak…”, one muses, with other similar sentiments elsewhere in the comments. Another has asked if the creator could also create a concept for bow-using bard Venti, with the artist responding, “I’m really considering it. If this gains enough traction, I’ll make him next”. So, better keep a weather eye out if you’re a Venti fan.