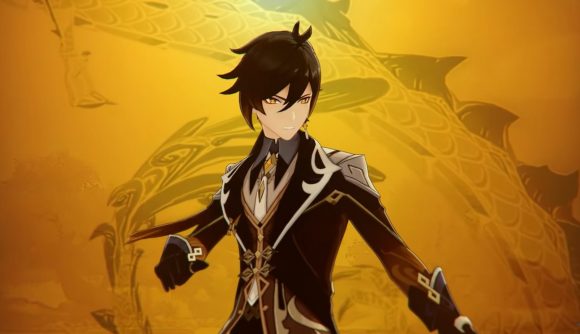 Genshin Impact‘s next banner kicks off very soon, and its featured character is already a hit among fans. Zhongli has the Genshin Impact fandom ‘thirsty af’ (that’s what the young folk say, right?), both for what look to be some powerful in-game abilities, and his extremely cool anime boy charms. A new trailer offers an extended look at both.

Zhongli is a geo-powered character, and we see him petrifying and shattering groups of enemies in the trailers. According to datamines (via Honey Impact), his abilities can cause nearby geo energy to explode, inflicting AoE damage to enemies, which is likely what we’re seeing in the trailer – just enough damage to put the killing blow on those creatures and make them shatter.

The banner starts on December 1, and will last until December 22. (Details on precise start times are available on the official site.) In addition to Zhongli, other event wish characters include pyro-powered Xinyan, electro-powered Razor, and cryo-powered Chongyun.

But just look at Zhongli! Look at this sexyboy. (He’s not your boytoy.)

Check out our guide to Genshin Impact characters for more waifus and husbandos to pledge your endless loyalty to.