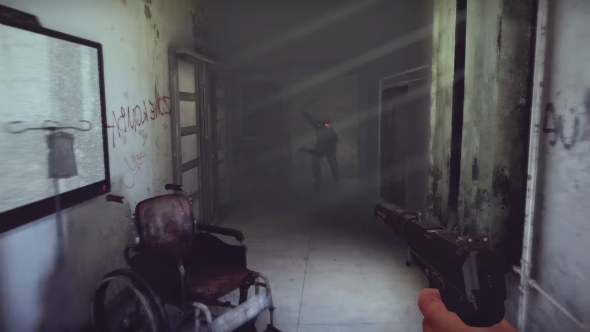 A new release date has been set for the psychological horror game, which will launch on PC and consoles in Spring 2017. The trailer is mostly atmospheric, and as such is very scarce on gameplay details. What we do see though, is a girl with a bomb strapped to her chest, lots of spooky shots of a mental asylum and a bloke sporting some terrifying headwear, running around with a pipe.

It’s certainly unconventional for a game that was announced well over two years ago to get an announcement trailer, but then Get Even is an unconventional game. When it was first unveiled its developers said it would be a first-person shooter that blends single-player and multiplayer elements to create a sort of distorted game world. It sounds great, but nearly three years on all we still only have snippets of gameplay and thematic trailers to go on, and that includes this latest trailer. This is also the first bit of news about Get Even since the game’s 2016 release window was delayed.

Details about the game’s story are also hard to come by, though the trailer’s description offer some cryptic clues:

Face in the dirt. Ears filled with screams. Wake up, prisoner. You need to…

…Search. The blackest of memories. The darkest of truths. Deep in your mind. You’ve already lost… can you still find grace?

The clock is ticking.

‘…it’s all part of the treatment.’

With such a quiet development period under its belt, we’re hoping this new release date is final and that we’ll be hearing more about the game in the near future.

Read More
Get Even system requirements