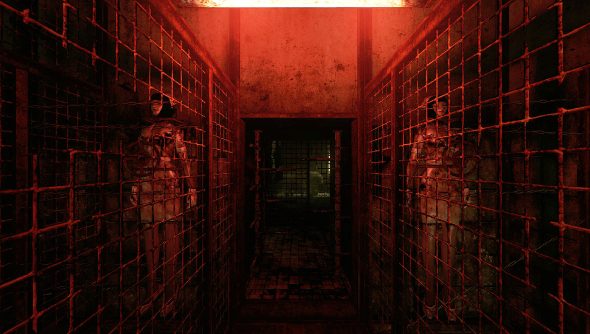 If you’re still mourning the fact that those PS4 lot got to enjoy some first-person chills in the form of PT, the teaser (and game in its own right) for Silent Hills, and you didn’t, mourn no more. Some diligent modders have, inspired by the Silent Hill series, crafted a first-person horror adventure using the Source Engine.

While Alchemilla is soaked in nightmares, it’s cerebral rather than physical. There are no monsters and no combat, just an oppressive atmosphere and puzzles. The designers did want to add those things, but couldn’t find anyone to help them implement it in time. It’s not really a loss, though.

It seems that quite a lot of what makes Alchemilla an impressive fan game is down to limitations. The focus is on puzzle solving and exploration and, of course, that pervasive sense of dread. Has there ever been a horror game that was improved with lots of shooting?

Like combat and enemies, the creators wanted to put in an inventory and notes system, but were unable to do so. Instead, you’ll need to take your own notes and draw your own maps. So dig out a notepad and a pen.

You can download it here and take it for a spin yourself. You’ll need to have the Source SDK installed first, though, which you can download from Steam.