The detective procedural is almost certainly the most successful genre on television. Every season new ones appear, of wildly varying quality, and each sporting some kind of gimmick to set it apart. Tim Roth is the world’s greatest consulting deception expert! An awkward forensic archaeologist and a hunky sidekick solve murders! Nathan Fillion is… Nathan Fillion. But he’s solving crimes now!

The procedural is to network television what the shooter is to games: a reliable, if formulaic genre that with a near-infinite number of possible twists to make what is very old seem fresh and new. But despite its constant potential for violence and discovery, the detective story has been quite rare in games. They’ve been the protagonists of quite a few adventures, yes, but puzzles aren’t really detective work. I asked Airtight Games’ Eric Studer, design lead on Square Enix’s Murdered: Soul Suspect, why such a massively popular television and fiction genre has so few examples among games.

“Well, it’s because I think it’s pretty hard!” he said, laughing. “The demo we’re showing is very early in the game so the investigations had to be a little bit easier, but if we didn’t escalate it as the players became more experienced then they would feel like they’d outgrown the product. So you’ve got multiple axes to deal with. One, finding something that hits that right balance between player challenge and player frustration is really delicate, but then also understanding how you escalate that to make sure that they’re constantly engaged. It’s a really tough process. But in truth, it’s awesome to be part of that. It’s awesome to work on something like that and have that kind of challenge.”

Murdered: Soul Suspect is a noir mystery set in Salem, Massachusetts. Detective Ronan O’Connor is a cop who is so old-school that he looks like he just crawled out of the frame in The French Connection, nursing a jaded outlook along with a porkpie fedora. He wakes up in the street one night to see his own corpse lying beneath a shattered fourth-story window, with his own killer standing over it. Before he can do anything, the killer takes his pistol out of his holster and empties the clip in Ronan’s chest, just for good measure. Then he walks off, leaving Ronan’s spirit with his last case.

Creative lead Yosuke Shiokawa says that he came up with the idea for Soul Suspect when he started wondering what would happen if Die Hard’s John McClain were the main character in Ghost (for starters, probably less pottery foreplay). But his motivation was to do something different in the AAA space. High production values, but in service to something besides a stale genre retread.

“Then there were other inspirational moments,” Shiokawa continued. “I really love JJ Abrams TV shows like Lost, Fringe and Alias. His TV shows have tons of mystery, tons of surprising moments and tons of twists. …Small twists, supernatural twists like mysterious islands, or time travel. I really loved that structure, I really loved that kind of direction. So I took that structure into the game. So we have mystery solving elements but we also have our own supernatural twist which is the ghost detective.” 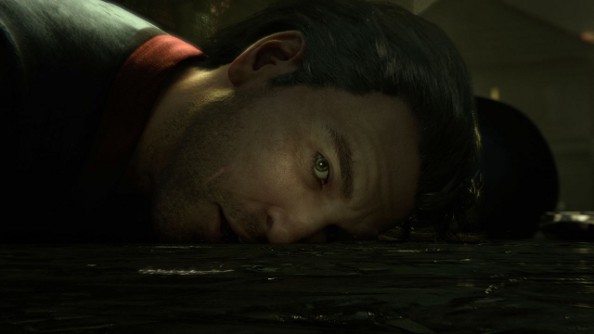 Watching the E3 demo of Soul Suspect, I was most strongly reminded of The Fullbright Company’s Gone Home, perhaps crossed with Frogwares’ Sherlock Holmes adventures. Ronan’s spectral form combs over detailed crime-scenes, inspecting objects potentially related to the crime, and eavesdropping on conversations. Each scene has a number of clues that can help lead Ronan to a number of deductions. Once Ronan gets his deductions right, he pieces together more of the crime and usually learns some more information.

What we saw in the demo was a rundown, not quite destitute part of Salem. Tiny apartments yellowed and browned by the grime of decades, dwellings more than homes. The attention to detail was impressive, and served to enrich the hunt for evidence. It’s not always easy to separate what’s a clue in your case from what’s just a clue to the story of the squalor that surrounds you. It also imposes some challenges on Airtight.

“The fact that you’re a ghost and you can go inside these characters’ lives and inside these houses means you need to have that level of detail,” Studer said. “Because if a player goes into a room and it’s empty, then we’re not delivering on our promise of being a ghost, and being able to get this slice of life from people as they live.” 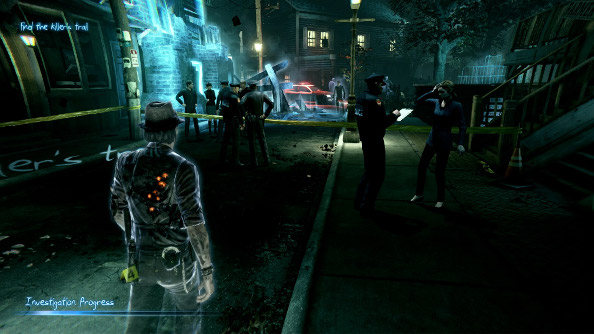 I was impressed by how well Soul Suspect captured the feel of eastern Massachusetts, where I live. Salem, or at least the shabby part of it where Ronan met his end, feels like one of the many decaying industrial burgs that dot the northeast. Three-deckers with decaying clapboard siding crowd the narrow, twisting street. It’s a small thing, but even before they announced where Soul Suspect takes place, it reminded me a lot of cities like Springfield and Quincy.

However, it’s also shot through with spectral buildings: just as Ronan’ spirit is a remnant of violence and tragedy, Salem is filled with long-vanished buildings that still cast a ghostly shadow on Ronan’s twilight world, called The Dusk.

“Why Salem? There are two reasons,” Shiokawa told me. “The first reason is pure look and fear. We have a ghost theme and we try to find appropriate locations for that. Salem has all this Gothic-looking kind of stuff. So pure visuals are one reason. The other reason is of course history. So Salem has a deep, dark history and can create …deep believable game worlds.”

That feeling of being in a declining city is underscored by the police who show up to investigate Ronan’s death, and even Ronan himself. Nobody on this police force seems particularly interested in the murder, with the exception of Ronan’s own brother, a lieutenant of homicide detectives. The first officer on the scene, Bruno Baxter, tries to steal Ronan’s hat while remarking that Ronan probably got what he deserved. Later, you can overhear Bruno telling another cop that the murder only stands to reason: “Live like a thief, die like a thief.” It seems like a decent bet that this is not what you might call a by-the-book police force.

Which is just as well, because the book is completely out the window along with Ronan’s physical form. Being a ghost, Ronan is kind of living in a voyeur’s paradise. Once inside a building, he can pass through its walls and go exploring every inch of the place. Don’t think you can just run riot around Salem, however. One of Soul Suspect’s conceits is that, due to Salem’s history with the occult and superstition, buildings are all sanctified and their exterior walls are impassable. You can only get inside if a hole appears in the outer perimeter — like a door opening, for instance. 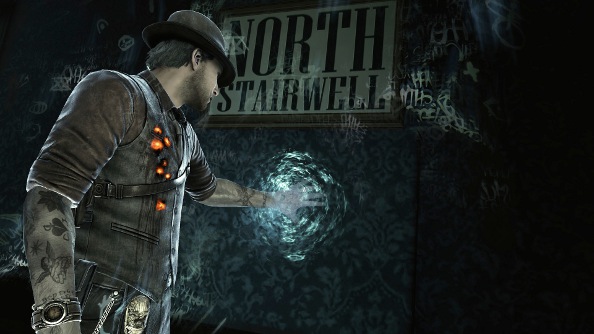 Unfortunately, while being a ghost lets you snoop and spy to your vestigial heart’s content, the fact remains that you can’t really physically interact with anything. As Ronan gets more comfortable with being a ghost, he can make some small changes to the world, like causing electric appliances to short out or suddenly turn on, but he can’t go opening doors or turning the pages on books.

What Ronan can do, however, is ride shotgun inside someone else’s head, experiencing what they are experiencing. So when he spots a second-rate detective going over his notes at the crime scene, Ronan is able to look through the homicide dick’s eyes and see what the Salem PD have collected so far. Later, when he’s trying to help lay a lost soul to rest (think of the needy ghosts of The Sixth Sense or, even better, Ghost Town), he helps find her lost body by listening to the thoughts of the old couple that accidentally killed her. They are haunted by the memory, and Ronan is able to learn about the crime simply by getting inside their heads for a few minutes.

But Ronan is not alone in the Dusk. He shares it with demonic spirits and a number of progression mechanics whose purpose I don’t fully understand. Here’s where I have a few reservations about Soul Suspect.

In addition to benign, lost souls like Ronan, there are evil spirits that are basically Harry Potter’s dementors haunting the Dusk. They were once ghosts like Ronan, but they never completed their unfinished business in the world and have gone mad with anger and desperation. If they grab hold of Ronan, they will consume his soul, which is presumably not the ideal way to reach the afterlife. But Ronan can kill them by attacking them unawares.

A producer on the game assured me that this was not a case of marketing saying “you guys need to have some combat to appeal to the mass market,” but it didn’t really feel like if fit, either. One minute Ronan is scouring a crime scene for clues, and the next he’s playing cat and mouse with a g-g-ghost that is evil incarnate, but which can be destroyed by a solid sucker-punch to the ghost kidneys.

The other odd thing is that Ronan gets experience for completing investigations and killing ghosts. Experience will purchase upgrades to some detective abilities, or his demon fighting powers. For instance, Ronan has a teleport power that starts out very short-range, but that can be upgraded considerably.

In the demo, all of this seemed obtrusive. Murdered: Soul Suspect went from being an exploration game in a sharply-drawn setting to being, well, Pac-Man: Ghost Detective Edition. Perhaps it will be a little more interesting and elegant outside of what was clearly a tutorial area, but what I saw left me more puzzled than anything.

On the other hand, the team seem to have a sense for when things are over the line. Originally, Souls Suspect was going to be fairly action-heavy, and Studer was quick to promise that in the game’s final incarnation, “You never get a ghost gun.”

“We eliminated that idea because it’s not ghostly,” Shiokawa added quickly.

Of all the games I saw at E3, Soul Suspect captured my imagination the most. I may have some significant concerns about the ghost battling that’s taking place in the Dusk, but I was thrilled by the attention to detail and characterizations I saw. It wasn’t even necessarily that I was desperate to solve Ronan’s murder. When Murdered: Soul Suspect comes out in early 2014, I’ll be happy just to go exploring Ronan’s twilight existence, and go sleuthing in his city of grief and regret.