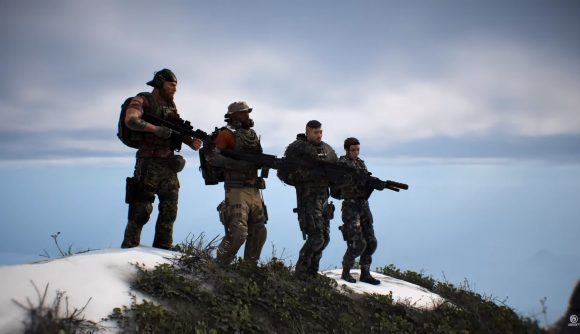 Ghost Recon Breakpoint will be a bit less lonely for solo players before long. AI teammates, who accompanied players throughout Ghost Recon Wildlands, make their return to Breakpoint July 15, nine months after the game’s launch.

Ubisoft went back and forth on including AI teammates in the run-up to Ghost Recon Breakpoint’s launch last year, eventually axing the feature. While some players had bucked at the AI’s suspiciously good aim and superhuman positioning speed in Wildlands, it turns out players felt a bit lonely up against Auroa’s army of lethal drones all by themselves. Now, AI teammates are back, ready to help you take down your next Behemoth tank.

During the pre-show for Ubisoft Forward, the Ghost Recon team provided a look at what Breakpoint’s AI teammates will be bringing to the game. This time, your squad members are fully customisable in both appearance and weapons, which you’ll be able to tinker with in Gunsmith. You’ll be able to issue orders to them through a command wheel to hold, regroup on your position, head to a specific location, or open fire – and you’ll be able to do this using your binoculars, scope, or drone.

The AI teammates will also mark threats and notify you if they see enemies, and they’ll react to your approach, crawling quietly with you if you go prone or letting the lead fly when you go loud.

AI Teammates are here, Ghosts. Fury, Fixit, and Vasily have got your back. Customize their look, loadout, and behavior when the free update drops July 15.

Solo Breakpoint players will be able to recruit – or dismiss – your new squadmates as soon as you arrive in the hub area of Erewhon in Breakpoint’s campaign, and after that it’s up to you to decide when to bring them along, what they look like, and how to incorporate them into your tactics.