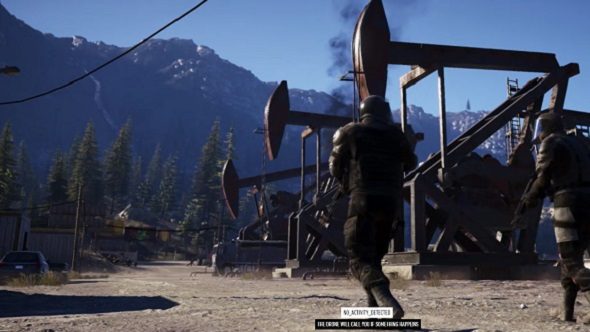 Ghost Recon WIldlands is out in just a few weeks, offering a massive swathe of open-world Bolivia for you to creep, drive, fly, and parachute through. Additionally, the open beta launches in just a few days. Until then, though, you can immerse yourself in its world of drug cartels with the A World With No Heroes minigame by DDB Paris.

If you need to know what else to set your sights on, keep an eye trained on our upcoming PC games list.

A World With No Heroes presents the playground of Ghost Recon Wildlands from a bird’s-eye view, with 50 ground-based security cameras available to zoom down to.

You can check out portions of the world, familiarise yourself with characters, and take part in surveillance operations. As far as interactive adverts go, it’s really well put together, containing its own narrative thread involving some stolen cocaine.

There are a bunch of little secrets nestled in the various cameras, too, with information on the rebels, the cartel, and Unidad – which is a corrupt military org, not a mature spinoff of media site Unilad.

As an incentive to try it out, you can also unlock in-game bonuses for when the game is released on March 7. A few minutes with the map will net you an experience boost and some unique emblems.

Ghost Recon Wildlands’ open beta begins on February 23. Until then, have a play around in A World With No Heroes.